Saturday night looked like it was going to be a heartbreaking loss for the Boston Red Sox, but instead, it could be one of the most important wins of the season.

The Red Sox trailed the Kansas City Royals by a run entering the eighth inning. They had blown two different leads and were in danger of dropping a game in which they had scored seven runs. But the Sox tied the game in the eighth against Joakim Soria to send the game to extra innings.

And then in the 10th inning, Eduardo Nunez came to the plate with runners on first and second with one out.

Nunez, who already had crushed two home runs in the game, hit a rocket to short, but Alcides Escobar laid out to glove it and threw out Nunez from the seat of his pants.

But Sandy Leon, who was on third, raced home and avoided the tag of catcher Drew Butera with a tumbling slide to give Boston a 9-8 win.

GAME IN A WORD
Uplifting.

The Red Sox looked to be headed to another defeat, but they rallied to tie the game and picked up a huge win in extra innings.

IT WAS OVER WHEN
Leon slid around Butera to send the Fenway Faithful home happy.

ON THE BUMP
— Eduardo Rodriguez struggled from the first pitch Saturday, as the left-hander was unable to record any quick innings in what was a short outing.

He worked around shaky command for the first three innings, but the Royals finally got to him in the fourth inning when Whit Merrifield muscled an RBI single into the center fielder to trim Boston’s lead to one. Two batters later, Lorenzo Cain lifted a fly ball that barely curved around Pesky’s Pole for a three-run home run. The round-tripper gave Kansas City a two-run edge.

Rodriguez recorded the final out of the inning, but that was it for his outing. He lasted four innings, allowing four runs on seven hits while striking out five and walking three.

— Fernando Abad tossed a scoreless fifth inning but ran into trouble in the sixth when he allowed the first two batters to reach and was pulled from the game.

— Blaine Boyer relieved Abad with runners on first and second with no outs. Escobar immediately moved to third on a passed ball and scored on an RBI infield single by Merrifield. The run was charged to Abad and trimmed the Sox’s lead to one. Jorge Bonifacio followed by lacing an RBI single to center to tie the game. Boyer was lifted after walking the next batter to load the bases.

— Robby Scott came in for Boyer with the bases loaded and no outs in the sixth inning but was unable to keep the Royals from taking the lead. Eric Hosmer rolled a ball to second base, but Nunez’s throw to second was offline, allowing a run to score and Hosmer to reach first. The Royals tacked on another run when Salvador Perez lifted a sacrifice fly to left field to give Kansas City a two-run lead.

Scott recorded two outs in the seventh before manager John Farrell took the ball from him with a runner on first.

— Heath Hembree got the final out of the seventh and pitched a scoreless eighth.

— Matt Barnes didn’t allow a run in the 10th inning.

IN THE BATTER’S BOX
— Christian Vazquez got the Red Sox on the board in the second inning when he laced a two-out RBI triple down the right field line to put Boston on top by one.

— Nunez extended the Red Sox’s lead to two with a solo blast in the third inning.

— The Red Sox quickly tied the game in the bottom of the fourth when Vazquez plated Mitch Moreland with an RBI double to right-center field, and Rafael Devers followed with an RBI single to center to tie the game.

— Nunez smoked another home run over the Green Monster in the fifth inning to give the Red Sox a one-run lead and chase starter Trevor Cahill from the game. Boston stretched its lead to two later in the fifth when Jackie Bradley Jr. scored on a fielding error by Mike Moustakas.

— Boston cut the Royals’ lead to one when Bradley drove in Andrew Benintendi with a sacrifice fly to right field in the seventh inning.

— The Red Sox tied the game in the eighth when Mookie Betts drove in Brock Holt with a sacrifice fly to center field.

— Leon led off the 10th inning with a double off the Green Monster and scored with an unbelievable slide around Butera.

TWEET OF THE NIGHT
The Sox need Rodriguez to find his first-half form.

UP NEXT
The Red Sox will conclude their three-game series against the Royals on Sunday afternoon. Drew Pomeranz will get the ball for Boston and will be opposed by Jason Hammel for Kansas City. First pitch from Fenway Park is scheduled for 1:35 p.m. ET. 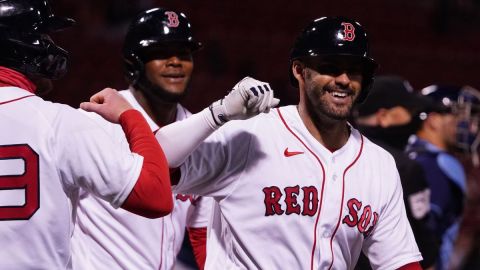