There’s no sugarcoating it: Any serious injury to Julian Edelman would be a major blow to the New England Patriots’ offense. But it would not be a crippling one.

Even if the highly productive wide receiver did suffer, as feared, a torn ACL during Friday’s 30-28 preseason win over the Detroit Lions, the defending Super Bowl champs are deep and talented enough on the offensive side of the ball to withstand it. Losing Edelman would force the team to make some changes, though, both from a game-planning and a roster construction perspective.

Some thoughts as the Pats await word on Edelman’s MRI, which is scheduled for Saturday:

— Even without Edelman, the Patriots’ receiving corps is in great shape. Brandin Cooks and Chris Hogan both have looked excellent this summer, while Malcolm Mitchell and Danny Amendola are solid as third and fourth options. Injuries have sidelined Mitchell at points this summer, though, so that’s a bit concerning.

— Hogan was a standout performer in Friday’s game, catching four passes on five targets for 70 yards and two touchdowns. He’d take on a more prominent role if Edelman indeed is lost for the year.

— The Patriots still have the NFL’s best tight end in Rob Gronkowski. If Edelman is out of the picture, we could see more receiving opportunities for newcomer Dwayne Allen, who’s known more for his blocking but had moderate success as a pass-catcher with the Indianapolis Colts.

— James White’s 2016 season was one of the best ever by a pass-catching back under coach Bill Belichick, and quarterback Tom Brady surely will look his way plenty this season if Edelman is not an option. Dion Lewis and Rex Burkhead might see more opportunities in the passing game, as well.

— Who takes Edelman’s roster spot if his MRI reveals the worst? There are a few candidates.

The ones most fans will point to are undrafted rookie receiver Austin Carr and D.J. Foster, a running back who played wideout in college.

Foster has put up impressive stats in the second half of preseason games this year (24 carries, 81 yards; nine catches, 99 yards in three contests), but he’s done most of that damage out of the backfield. Watching him take reps at receiver during camp, I wasn’t impressed.

Carr could be the one who benefits most from a serious Edelman injury, as there likely won’t be a spot for him on this team if every receiver is healthy. The Northwestern product has been the best of New England’s long-shot wideouts this preseason (11 catches, 105 yards, one touchdown) after Devin Lucien outperformed him on the practice field during training camp, and it might be tough to sneak him through waivers and onto the practice squad.

There’s also a chance the Patriots could opt to keep just Cooks, Hogan, Mitchell, Amendola and special teams ace Matthew Slater on their 53-man roster and use the extra spot on a player at another position. Slater has been injured for most of the past month, though, which could complicate that plan. 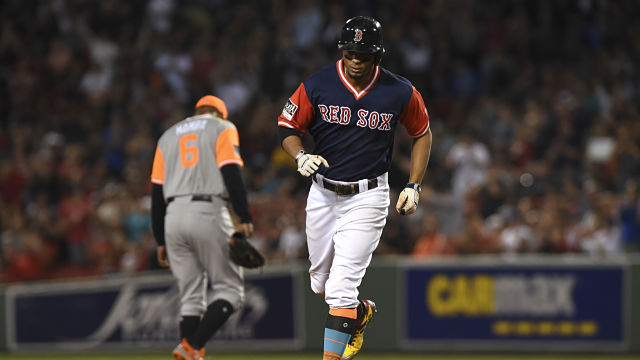