The New England Patriots surrendered 24 unanswered points in the second half to the Detroit Lions but emerged victorious thanks to Stephen Gostkowski’s go-ahead 45-yard field goal with two seconds remaining.

Tom Brady played until the final moments of the first half, completing 12 of 15 passes for 174 yards and two touchdowns with one interception. Jimmy Garoppolo handled quarterbacking duties the rest of the way, going 7-for-12 for 83 yards.

The Patriots will close out the preseason next Thursday night against the New York Giants.

Fourth quarter, 2:01, Lions 28-27: After a quick Lions three-and-out, the Patriots’ offense heads back on the field. Jimmy Garoppolo still is in the game, so it looks like we probably won’t see third-string QB Jacoby Brissett.

Fourth quarter, 3:41, Lions 28-27: The Patriots finally found some offensive momentum for the first time in this second half but had to settle for a field goal.

Versatile running back D.J. Foster was the go-to guy for the Patriots on that possession, racking up 47 all-purpose yards and picking up a first down on fourth-and-5. A drop by James O’Shaughnessy proved costly.

Another prolonged Detroit drive, which included completions of 15, 13 and 29 yards, culminated in a 1-yard scoring run by Dwayne Washington.

The Patriots have been outscored 21-0 in this second half. And Kony Ealy, who was disruptive at the start of the third quarter, looks gassed. The fact that he’s still in the game does not bode well for his hopes of earning a roster spot.

Fourth quarter, 11:40, Patriots 24-21: Another three-and-out for Jimmy and Co. The Patriots’ backups have not impressed in this second half.

Garoppolo has completed 3 of 5 passes for 14 yards so far tonight.

It’s a bit interesting that Brandon Bolden has not gotten any carries tonight. The Patriots used Bolden at running back in their first two preseason games, but it’s been all D.J. Foster in this second half.

Fourth quarter, 12:53, Patriots 24-21: The Lions continue to put together lengthy drives against the Patriots’ reserves, but their latest one ends in a punt.

Let’s see if Jimmy Garoppolo can put together a sustained drive of his own, which he has been unable to do up so far tonight.

Third quarter, 2:06, Patriots 24-21: The Patriots’ offense has stalled since Jimmy Garoppolo entered the game. Garoppolo completed a 9-yard pass to Austin Carr but was unable to pick up a first down as New England was forced to punt again.

Third quarter, 3:36, Patriots 24-21: The Patriots’ second-team defense is not faring so well in this second half.

Lions backup quarterback Jake Rudock just marched Detroit down the field on an 11-play, 62-yard drive that culminated in an 11-yard touchdown pass to Jared Abbrederis.

The good: Kony Ealy was able to generate consistent pressure from the interior throughout the drive.

The not-so-good: Rudock was able to pick apart New England’s secondary. Not the best showing so far by the Patriots’ reserve D-backs.

Third quarter, 8:48, Patriots 24-14: Nothing doing for the Pats on their first possession of the second half. Three-and-out.

Third quarter, 10:34, Patriots 24-14: The Lions have cut the Patriots’ lead to 10 after driving for a touchdown on the opening drive of the second half.

Dwayne Washington did the honors, taking a short pass from Matthew Stafford and racing 18 yards to paydirt. Jordan Richards had Washington dead to rights in the open field but whiffed on the tackle.

Richards, who is fighting for a roster spot, simply cannot afford to make plays like that.

Speaking of guys who might be on the roster bubble, defensive end Kony Ealy saw his first action after watching the first two quarters from the sideline.

Julian Edelman, who injured his knee on the game’s first drive, has been downgraded to out. Bill Belichick did not offer any clarity on the wideout’s condition in his halftime interview with WBZ-TV’s Steve Burton, saying only, “I don’t know.”

Belichick's update on Edelman: "Yeah, no, I don't know." pic.twitter.com/yU5nyU7EC2

Halftime, Patriots 24-7: It’s halftime, but Tom Brady’s night already is over, as Jimmy Garoppolo replaced him on the final drive.

Here’s how Brady did:

Brady threw into double coverage in the end zone and was intercepted by Glover Quin. There appeared to be some serious miscommunication on the play, as the nearest receiver, Chris Hogan, was nowhere near the ball.

The Lions now are driving as we reach the two-minute warning.

Detroit’s most productive drive of the night ended when Eric Rowe stepped in front of a pass intended for Kenny Golladay for an interception.

Rowe had been beaten deep down the sideline by Marvin Jones one play earlier, but Jones was unable to hold onto the ball as he fell out of bounds.

Second quarter, 14:00, Patriots 24-0: The Lions finally picked up their first first down, but their latest drive lasted just four plays. Detroit punter Kasey Redfern has been a busy man tonight.

First quarter, 4:54, Patriots 21-0: Another three-and-out by the Lions, who currently have 19 yards of total offense.

Defensive tackle Adam Butler sliced through the line on second down to stop Theo Riddick for no gain. Butler is making a case for a roster spot as an undrafted rookie.

After sitting out the first eight-plus minutes of this game, the former Buffalo Bills running back took a handoff on his first snap as a Patriot and rumbled into the end zone for another New England touchdown.

After Detroit lined up illegally on the ensuing extra-point try, the Patriots opted to go for two. They called what appeared to be the exact same play, and Gillislee bulldozed his way over the goal line again.

First quarter, 9:37, Patriots 13-0: The Lions still are looking for their first first down. They went three-and-out on their second possession, with Stephon Gilmore helping force a punt with an excellent open-field tackle on rookie wideout Kenny Golladay.

The Patriots also offered an update on Edelman’s condition:

The Patriots put another touchdown on the board after Malcolm Butler, who struggled against the Texans last weekend, forced a fumble on Detroit’s first offensive play. Jordan Richards recovered, and Brady found Hogan again one play later for a 32-yard scoring strike.

Hogan, who’s looked great throughout the summer, fought through pass interference on the play.

Stephen Gostkowski missed the ensuing extra point, however. He was perfect on extra points in the first two preseason games, though he did miss a long field goal against the Jacksonville Jaguars.

First quarter, 11:51, Patriots 7-0: Tom Brady and the Patriots’ offense made it look easy on their first drive of the night, marching 75 yards in seven plays and opening the scoring with a 7-yard touchdown pass to Chris Hogan.

Working out of the hurry-up, Brady delivered throws with surgical precision, completing all four of his passes for 59 yards. Dion Lewis, who started the game at running back, picked up 11 yards on three carries.

It wasn’t all good news for New England, though. Wide receiver Julian Edelman caught three passes for 59 yards on the drive but left the field with an apparent right knee injury. He was examined on the sideline, then was carted off to the locker room.

It goes without saying that losing Edelman would be extremely unfortunate for the Patriots.

First quarter, 15:00, 0-0: And they’re off. Dion Lewis takes a knee on the opening kickoff, and the Patriots will begin the game from their own 25-yard line.

6:29 p.m.: You won’t see any of these players take the field for the Patriots:

That means we should see running back Mike Gillislee and defensive end Trey Flowers, both of whom sat out last Saturday’s game against the Houston Texans. This will be Gillislee’s Patriots debut, and he could see a lot of work with Rex Burkhead out.

Expect to see a lot of Kony Ealy, too, with D-ends Deatrich Wise, Geneo Grissom and Derek Rivers all unavailable.

Finally, it appears tight end Rob Gronkowski will take the field for the second consecutive week. He previously went four straight years without playing in a single preseason game, so this is a clear deviation from the Patriots’ usual Gronkowski protocol.

4:25 p.m.: We’re a little more than two-and-a-half hours away from kickoff in Detroit. Spend that time catching up on some of the top stories from this week.

— Linebacker Dont’a Hightower is back, and a position change could be in his future.

— Running back Mike Gillislee fully participates in practice and declares himself 100 percent healthy.

— The Patriots are still figuring out what to do with undrafted rookie linebacker Harvey Langi.

— Belichick has no room for players who can’t handle preseason pressure.

— Tight end Dwayne Allen gives a strikingly honest assessment of his adjustment to the Patriots’ offense.

— Is defensive end Kony Ealy already on the trading block?

— This week’s episode of “Between the Tackles”:

12:20 p.m.: Though starters typically play much more in the third preseason game than in any other exhibition contest, several key Patriots players reportedly will not suit up against the Lions.

According to reports from ESPN.com’s Mike Reiss, tackle Nate Solder and linebackers Dont’a Hightower, Elandon Roberts and Shea McClellin all did not make the trip to Detroit.

McClellin, tackle Tony Garcia, tight end Matt Lengel, running back Rex Burkhead, defensive end Derek Rivers and wide receivers Malcolm Mitchell and Matthew Slater all missed practice Tuesday and Wednesday, so it’s likely most or all of those players will sit out Friday’s game, as well.

The New England Patriots will take on the Detroit Lions on Friday at Ford Field in their penultimate exhibition contest, and if history is any indication, we should see Tom Brady, Julian Edelman, Malcolm Butler and the rest of the Patriots’ starting offense and defense play close to the entire first half, if not more.

Starters typically have their heaviest workload in the third preseason game, which often is referred to as a “dress rehearsal” for the regular-season opener, which for New England will take place Thursday, Sept. 7.

Kickoff is set for 7 p.m. ET, but be sure to check back throughout the day as we recap the top stories of the week and look ahead to tonight’s matchup. 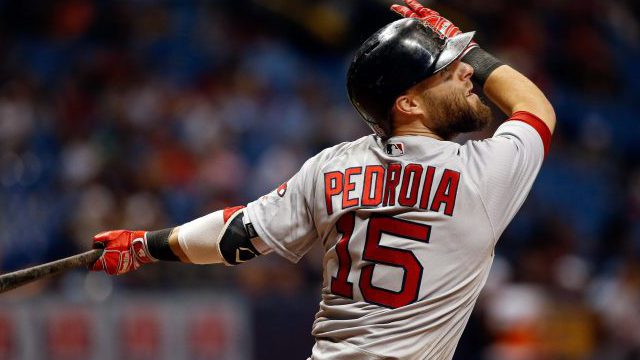 Dunkin’ Poll Results: Which Red Sox Nickname Do You Like Better? 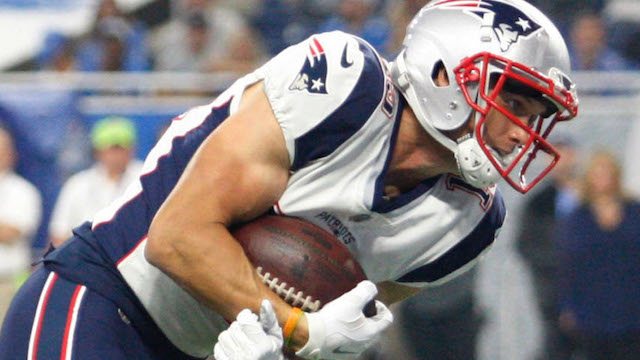