Final, Texans 27-23: The Patriots had one last chance to score, as Jacoby Brissett and Co. got the ball in the red zone, but the backup quarterback fumbled the ball through the back of the end zone for a touchback. The Pats fall to 0-2 on the preseason.

New England will be back in action Friday with the all-important third preseason game in Detroit against the Lions. — CM

Fourth quarter, 1:47, Texans 27-23: The Patriots forced a quick three-and-out, and they’ll have the ball near midfield. — CM

The Patriots just retook the lead on a 25-yard touchdown catch by running back D.J. Foster from Garoppolo. Foster now has two touchdowns this preseason. He has two carries for 3 yards and has caught three passes for 41 yards tonight.

Foster fumbled in Week 1 of the preseason but undoubtedly is the Patriots’ fastest running back.

Third quarter, 3:05, Texans 20-16: The Texans extended their lead to 20-16 with a field goal after the Patriots’ defense thwarted Houston’s offense.

Cornerback Justin Coleman is having a solid game for the Patriots with two pass breakups.

Third quarter, 4:04, Texans 17-16: Garoppolo just got annihilated as Tony Washington came off the edge unblocked. Garoppolo fumbled on the sack, and it was recovered by the Texans.

Third quarter, 4:12, Texans 17-16: The Patriots are letting up a lot of big plays two games into the preseason. The Patriots allowed a 63-yard catch and run by running back D’Onta Foreman. Linebacker Elandon Roberts, who was in coverage was hurt on the play, walked off the field slowly and then had to be carted off the sideline into the locker room. He was grabbing his right side or back as he walked off the field.

The Texans scored on a 2-yard scramble touchdown by rookie quarterback Deshaun Watson.

Third quarter, 5:58, Patriots 16-10: The Patriots took a six-point lead on another field goal by Gostkowski. The Patriots picked up another two first downs with Garoppolo at the helm. The drive stalled after a third-down incompletion to James O’Shaughnessy, who now has four catches for 38 yards.

Gostkowski hit a field goal from 42 yards out.

Third quarter, 9:21, Patriots 13-10: The Patriots’ defense, which features mostly second-stringers at this point, just forced a three-and-out. Cornerback Justin Coleman had a pass breakup on third down.

Third quarter, 10:53, Patriots 13-10: The Patriots started to move the chains with two first downs until rookie offensive lineman Cole Croston was called for holding. The Patriots were forced to punt after Jimmy Garoppolo ate a 7-yard coverage sack.

The Texans have the ball on their own 4-yard line.

End half, Patriots 13-10: The answer was no. The Patriots lead 13-10 after a three-and-out, punt and Texans kneel down to end the game.

Second quarter, 1:13, Patriots 13-10: The Patriots forced a quick three-and-out and get the ball back with a little over a minute to go. Can Garoppolo lead another scoring drive?

Second quarter, 1:55, Patriots 13-10: The Patriots took a three-point lead on a 51-yard field goal from Stephen Gostkowski. Running back Dion Lewis isn’t letting Burkhead steal his thunder. Lewis carried the ball four times for 25 yards and caught one pass for 9 yards as the Patriots drove down the field. He’s forcing the Patriots to carry four running backs with this solid play through two preseason games.

Second quarter, 5:07, 10-10: We’re all tied up again. The Patriots let up another big play to Bruce Ellington, this one a 33-yard reception with Justin Coleman in coverage. Coleman and safety Damarius Travis crashed into each other as the play evolved, leaving Ellington wide open.

The Texans settled for a 31-yard field goal after an incompletion on third down.

Second quarter, 11:29, Patriots 10-7: This game is moving FAST. Jimmy Garoppolo came in for Brady, and the Patriots went up 10-7 with a field goal. Garoppolo was 2 of 3 for 20 yards with completions to tight end James O’Shaughnessy and wide receiver Malcolm Mitchell. He threw an incomplete pass to running back Brandon Bolden on third down, leading to the field goal, a 38-yarder by Stephen Gostkowski.

Cyrus Jones led things off with an impressive 32-yard punt return. He needs more of those after a tough first game defensively.

Second quarter, 11:29, 7-7: The Patriots forced a three-and-out in Deshaun Watson’s first drive of the game at quarterback. There was a near fumble recovered by the Patriots on third down, but the officials called it an incompletion.

Burkhead has seven carries for 20 yards and three catches for 50 yards with the touchdown.

First quarter, 1:13, Texans 7-0: This has not been a pretty game for Malcolm Butler. He just let up a touchdown to Jaelen Strong and has given up five catches on five targets for 71 yards with a touchdown.

Kidder and fellow UDFA Harvey Langi had a tough drive. Langi was flagged for illegal hands to the face.

First quarter, 8:01: The Patriots picked up one first down on their first drive. Brady went 2 of 4 for 11 yards. He threw wide of Julian Edelman on third down to force a punt.

Rex Burkhead got the start at running back and carried the ball twice for 6 yards. He had carries of 8 yards and -2 yards. Texans defensive end J.J. Watt blew him up on the negative carry when he swam past Patriots offensive linemen Joe Thuney and David Andrews.

First quarter, 10:35: The Patriots forced a turnover on downs at their own 6-yard line on the opening drive. The Texans went for it on fourth-and-6 and ran the ball for 2 yards. Odd call.

Malcolm Butler gave up three catches, including a 37-yarder. Stephon Gilmore, the other starting cornerback, recorded a pass breakup in the red zone.

It appears Rob Gronkowski is playing in a preseason game for the first time since 2012. That’s wild.

Gronk looks like he's readying to play. Would be a little bit of a surprise. #Patriots

This would be a shock. He hasn’t played in the preseason since 2012.

The only surprise in that list is Grissom, who didn’t miss practice this week.

Cam Fleming gets the start at LT in warmups.

That’s with Waddle out. Fleming started one game at left tackle last season.

6 p.m.: Here are some notes from fellow beat writers on the scene in Houston.

Julian Edelman is on the field going through his usual pregame catch routine. About 3 hours till kickoff.

Rookie safety Damarius Travis, who had been in a red non-contact jersey this week, is warming up while trainer Moses Cabrera looks on.

Trey Flowers and Geneo Grissom are on the field in helmets/game jerseys.

8 a.m. ET: The New England Patriots’ second preseason game will be far more entertaining for those who enjoy watching the team’s starters rather than players they don’t recognize.

Quarterback Tom Brady and many of the team’s starters are set to play Saturday night against the Houston Texans at NRG Stadium, a source told the Boston Herald’s Jeff Howe. Tight end Rob Gronkowski isn’t expected to play, as is typical for preseason action.

Burkhead especially is a player to watch because with an impressive preseason, he could usurp the early-down running back role from Mike Gillislee, who currently has a hamstring injury.

Other players to watch include linebacker Harvey Langi and defensive tackle Adam Butler. The Patriots can use all the pass-rush help they can get after rookie defensive end Derek Rivers reportedly tore his ACL. We’ll also be keeping a close eye on defensive end Kony Ealy and cornerback Cyrus Jones. They both have much to prove this preseason.

Stay here for updates and analysis throughout the game, which airs on WBZ-TV locally in New England at 8 p.m. ET. 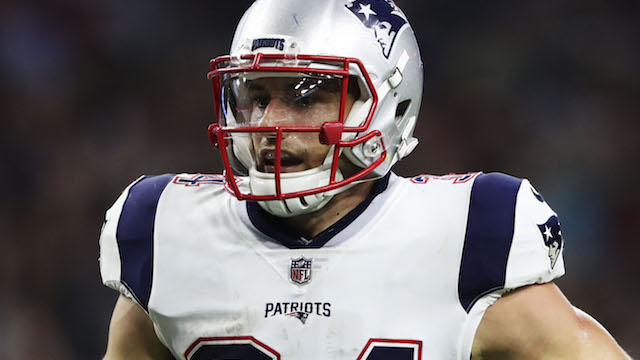 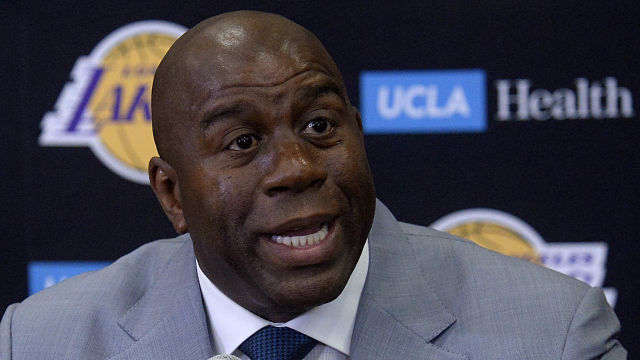 NBA Rumors: Lakers Being Investigated For Tampering With Paul George