Red Sox pitcher Doug Fister entered Wednesday’s start against the Oakland Athletics at Fenway Park with three wins over his last four outings, but he was unable to maintain that success thanks to a poor first inning.

Fister allowed four hits and four runs in the first inning, then two hits and a walk in the third inning as the Athletics jumped out to a quick 6-1 lead before the Sox came to bat for the third time. Oakland went on to win 7-3 and even the series.

First-inning struggles haven’t been uncommon for Fister this season, particularly of late.

Fister has been a quality addition to Boston’s rotation despite Wednesday’s performance. He’s 5-3 in his last eight outings, and he allowed two runs or fewer in five of those games. That stretch also includes two victories over the American League-leading Cleveland Indians, and a win versus the New York Yankees.

Chris Sale and Drew Pomeranz are locks as postseason starters — if the Red Sox qualify — but the rest of the playoff rotation is uncertain. Eduardo Rodriguez has been inconsistent, and injuries have disrupted David Price’s season. So, a strong start to the regular season could put Fister in prime position to earn a spot on the postseason roster.

— Andrew Benintendi was 2-for-4 with a pair of doubles, giving the Sox rookie outfielder eight hits and four doubles over his last four games.

— Hanley Ramirez, who was 0-for-4 Wednesday, is in a slump that goes back to the beginning of the month. He’s hitting 6-for-36 with zero extra-base hits since Sept. 1.

— Dustin Pedroia has been red-hot at the plate in this series. He’s 6-for-8 with three runs scored over the first two games. The veteran second baseman also has an impressive hit streak going against the A’s.

Dustin Pedroia now has a 26-game hitting streak vs. the A?s, the longest ever by a Red Sox player against the franchise (via @EliasSports).

It’s the league’s longest active hit streak for a player against one team. Pedroia is batting .423 with six doubles, three home runs, 15 RBI and 25 runs during the streak.

— Jackie Bradley Jr. went 1-for-4 with his 16th home run of the season in the fifth inning. He now has tallied 21 RBI in 21 career games against the Athletics.

— Sox starter David Price hasn’t pitched since July 22, but he took another step in his recovery Wednesday afternoon by throwing 47 pitches over three simulated innings. Price told reporters afterward that he “felt good.”

John Farrell on David Price: "It would be aggressive to bring him back as a starter right now, in my mind." Nothing decided, they meet tomm.

— A’s second baseman Jed Lowrie went 3-for-4, including his 45th double and third triple of the season, with two runs scored and two RBI against his former team.

— The Athletics used five relief pitchers over four innings, and they allowed three hits and no runs.

— The Red Sox are 10-47 when they score three or fewer runs this season. 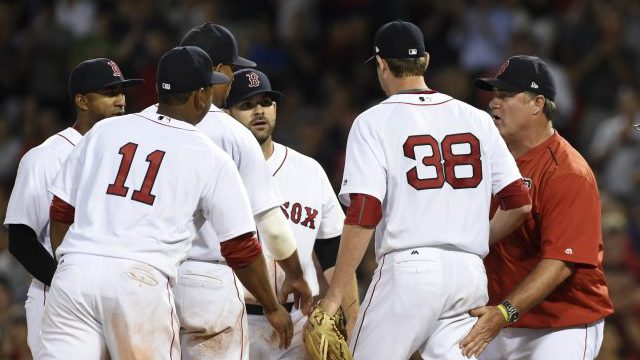