Celtics Coach Brad Stevens says Gordon Hayward has a dislocated ankle & a fractured tibia. On his way back to Boston tonight.

Officials tell me Gordon Hayward is being flown via MedFlight to Boston. He will then be taken to NE Baptist Hosp in Boston. Our best to him

#NEBHInjuryReport: After a medical evaluation by Celtics/Cavs medical personnel Gordon Hayward has been diagnosed w/ a fractured left ankle.

UPDATE (Tuesday, Oct. 17 at 8:50 p.m. ET): Hayward remains in the Cleveland Cavaliers locker room, where LeBron James went to check on him at the end of the first period, per ESPN’s Brian Windhorst. Former Boston Celtics guard Isaiah Thomas also was with Hayward.

Isaiah Thomas, who recruited Hayward to Boston over summer, has also been with him in locker room.

ORIGINAL STORY: The veteran forward went up for an alley-oop and landed awkwardly, causing a severe injury to his leg/ankle.

Hayward remained on the floor for a few minutes as medical personnel from the Boston Celtics and Cleveland Cavaliers attended to him. He was then put on a stretcher and escorted out of the arena.

Gordon Hayward being carted off with his left leg immobilized. pic.twitter.com/CBFbj6KLOq

The Celtics huddled up as a team as they tried to regroup after seeing their teammate go through a gruesome injury. 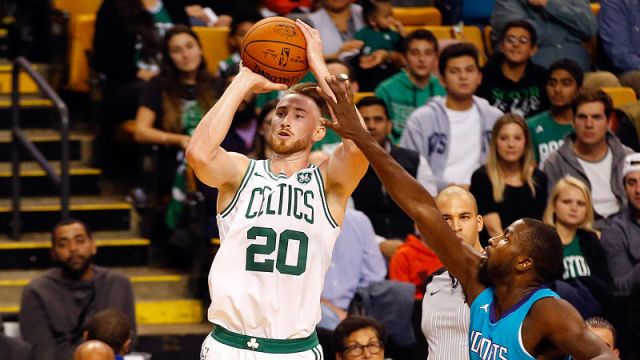