The Patriots’ defense looked beyond saving just four days earlier as they fell to the Carolina Panthers 33-30 at home. Given their communication issues, there’s was legitimate chance the Patriots’ secondary previously could have accidentally left a Foxboro High School receiver open for a touchdown.

But — for three quarters, at least — the Patriots’ defense was unrecognizable in Week 5 as they beat the Tampa Bay Buccaneers 19-14.

The Patriots let up just 104 yards through the air and 76 on the ground for the first three quarters while holding the Buccaneers to seven points. They allowed 215 yards passing, 14 yards rushing and seven more points in the fourth quarter as they moved to off-man coverages to prevent big plays and long touchdowns. Sometimes the end of a game is just as much about bleeding out the clock as it is about preventing every possible reception. The Patriots’ defense helped win the game by preventing a last-minute touchdown.

So, what happened? How did the Patriots’ defense go from allowing 33 points one week to 14 the next?

First, the Patriots fixed the communication issues in their secondary by having cornerback Stephon Gilmore, who was in the middle of many of those problems, shadow Bucs top receiver Mike Evans. It worked. There were no blatant communication issues, and Evans only caught five passes on eight targets for 49 yards. Gilmore strayed from Evans on only one passing play, which came late in the second quarter, when the Buccaneers aligned in a bunch formation. Many of the Patriots’ Week 3 issues came against bunch formations, when two defensive backs would cover one receiver, leaving another wide open for a big play.

Coverage sack. Jameis wants to go to Evans or Brate, but McCourty jumps route to Brate at top of screen and Chung is there to cover Evans. Jameis doesn?t have time to get to see the flat wide open. #Patriots pic.twitter.com/mDORtm97du

Gilmore covered tight end Cameron Brate on the opposite side of the field, while Malcolm Butler, Jonathan Jones and Patrick Chung swapped receivers post-snap from the bunch, covering the receiver whose route coincided with their pre-snap alignment. Devin McCourty, lined up as the strong safety, dropped down to help out on Evans and Brate. The Buccaneers also came out in a bunch early in the fourth quarter. Gilmore lined up across from Evans, who was in the bunch, this time. Gilmore, Chung and Devin McCourty didn’t swap receivers post-snap and correctly covered their side of the field. Butler gave DeSean Jackson too large of a cushion, and the Bucs wide receiver sprung for a 41-yard catch and run. Safety Duron Harmon took an less-than-ideal angle on the play, and Chung continued chasing his receiver well after the catch was made, allowing for the big play.

Butler just way too far off of DJax to make this play. Look at where McCourty starts and finishes to catch Jackson on the tackle. #Patriots pic.twitter.com/cgkF6e4Xo0 Tight end OJ Howard aligned out wide then motioned inside. McCourty slid over with him, and Chung moved up to stagger the defensive alignment to make sure no one collided off the snap. Rather than switching receivers based on their post-snap routes, each player just stuck on their pre-snap receiver. This is an easier system that doesn’t take the same level of communication. Unfortunately for the Patriots, Butler was playing too far off of Jackson, Winston passed the ball quickly, and Jackson ran right past Butler and Harmon. Apparently, McCourty is faster than Jackson and caught him from behind. The Patriots likely will continue to have Gilmore shadow receivers when the situation warrants it, though don’t expect that to be every week. The Patriots showed enough faith in their secondary to mix different coverages. They used Cover-1 man, 2-man, Cover-3, Cover-2 and quarters. Until Gilmore is entirely acclimated, expect the Patriots to try to avoid using him against bunch formations. When he does have to guard a receiver in a bunch, it might be smart to avoid swapping receivers post-snap.

The Patriots’ defense won’t finish the year first in points against, as they did in 2016, but they won’t finish last either.

Here are some other assorted thoughts from our film review:

— Dont’a Hightower moved back to inside linebacker in certain situations. He almost exclusively played as an edge defender in Weeks 1 and 4 while sitting out with an injury in Weeks 2 and 3. The Patriots’ run defense was far from perfect, but having Hightower back in the middle seemed to help.

— Running back Mike Gillislee continued to run hard. He still hasn’t broken off a long run, but he has increased his yards per carry from 3.2 to 3.6 in the last two weeks.

— Safety Devin McCourty’s tackling was top notch against the Buccaneers.

— Defensive tackles Malcom Brown and Lawrence Guy have been a steady presence in the middle of the Patriots’ defense. If the Patriots’ linebackers were playing better, their run defense would probably be solid.

— It’s remarkable, given the offseason hype, that tight end Dwayne Allen doesn’t have a reception through five weeks. He’s mostly a solid blocker but had multiple miscues Thursday. 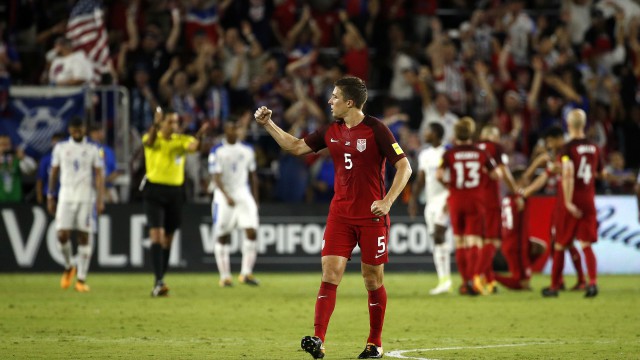