Graham Gano booted a 48-yard field goal as time expired to hand the Patriots their second home loss of the season.

Deatrich Wise appeared to put an end to Carolina’s final drive when he sacked Cam Newton on third down, but Stephon Gilmore again was called for illegal hands to the face, giving Carolina an automatic first down. It was the second time Gilmore has committed that particular infraction today and the fourth time he’s been flagged in the past two games.

Patrick Chung also was whistled for defensive holding later in the drive.

Newton, the NFL’s least accurate passer last season based on completion percentage, completed 22 of 29 passes for 316 yards and three touchdowns with one interception. He also ran for another score.

Tom Brady completed 32 of 45 passes for 307 yards and two touchdowns — one to Chris Hogan and one to Danny Amendola.

The Patriots now will have just three days off before they visit the Tampa Bay Buccaneers on “Thursday Night Football.”

The Patriots utilized a steady dose of Danny Amendola to pull even with the Panthers. The reliable wideout picked up two first downs during the 49-yard scoring drive and finished it off with a 1-yard touchdown catch on fourth-and-goal.

Amendola celebrated the score by paying tribute to Julian Edelman, who is sidelined for the season with a torn ACL.

Carolina went three-and-out and punted for the first time all game, giving the ball back to New England near midfield with plenty of time remaining on the clock. Dont’a Hightower, who’s had his snaps limited today in his return from a knee injury, sacked Cam Newton on third down to bring the punting unit onto the field.

Fourth quarter, 8:46, Panthers 30-23: The Patriots are back to within one touchdown of the Panthers.

A 13-yard completion to Rob Gronkowski on fourth-and-3 extended the drive, and a 17-yard pickup by Phillip Dorsett brought New England into the red zone. Dion Lewis capped things off with an 8-yard touchdown run, outracing cornerback Kevon Seymour to find the end zone for the first time this season.

Fourth quarter, 12:58, Panthers 30-16: Another drive, another long completion by a Panthers receiver.

Kelvin Benjamin did the honors again this time, settling into a hole in the Patriots’ secondary to pick up 39 yards on third-and-4. After a 3-yard run by Jonathan Stewart and a 9-yard run by Christian McCaffrey, Cam Newton dove into the end zone for a rushing touchdown that extended Carolina’s lead to 14 points.

Newton is in the midst of one of his best games since his 2015 MVP season, completing 21 of 25 passes so far for 311 yards and three touchdowns, plus another score on the ground. And there’s this:

The Patriots have allowed the opposing QB to throw for 300+ pass yards in all 4 games this season.

They had 3 such games all of last season

The Patriots will need to mount another fourth-quarter rally if they want to avoid falling to 2-2 on the season.

The possession went nowhere from there, though, a kick catch interference penalty on Jonathan Jones gave Carolina a free 15 yards of field position.

Cam Newton and the Panthers drove 68 yards in 11 plays, capping the drive with a 16-yard touchdown pass to Devin Funchess. Funchess beat Malcolm Butler on the play.

Carolina converted three third downs, including one on an illegal hands to the face penalty by Stephon Gilmore. Newton also ran for two first downs on the drives, picking up the necessary yardage with relative ease.

Graham Gano did miss the extra point, however, meaning the Patriots can tie the game with a touchdown.

Third quarter, 9:17, Panthers 17-16: Tom Brady had Dwayne Allen wide open downfield on second down but could not connect with the tight end, who still is searching for his first catch of the season. A sack on third down brought Ryan Allen in to punt.

Cornerback Eric Rowe started the second half in place of Stephon Gilmore, then went down with an injury on the very first play and limped straight to the locker room. Rowe appeared to aggravate the groin injury he suffered two weeks ago in New Orleans.

Gilmore then returned to the game, and Cam Newton methodically marched the Panthers’ offense down the field, picking up 24 yards on a completion to Ed Dickson, 13 on a pass to Russell Shepard and 12 on a run by Jonathan Stewart.

The drive yielded no points, however, as Trey Flowers stripped the ball from Stewart’s hands and Elandon Roberts jumped on it, giving the ball back to New England at its own 7-yard line.

Cam Newton was able to find Kelvin Benjamin wide — and we mean wide — open for a 43-yard gain with just over a minute remaining in the half, then hit Devin Funchess for a 10-yard touchdown two plays later.

Benjamin’s big gain was yet another example of miscommunication between the Patriots’ defensive backs, as there were no defenders anywhere near the big-bodied wideout when he made the catch.

The Patriots could have gotten off the field minutes earlier, but a missed tackle by Eric Rowe allowed Funchess to pick up a first down on third-and-8.

After Funchess’ touchdown catch, New England responded by picking up another yardage for Stephen Gostkowski to drill a 58-yard field goal as time expired in the half. It was the longest field goal of Gostkowski’s career and the longest in Patriots history.

Carolina will get the ball first to begin the third quarter.

Second quarter, 4:30, Patriots 13-10: The Patriots mounted another lengthy drive but again were forced to settle for a Stephen Gostkowski field goal.

The play of the drive was a 43-yard catch-and-run by Rob Gronkowski during which the big tight end practically dragged safety Demetrious Cox for the final 10 yards.

The Panthers now are playing without half of their starting secondary after safety Kurt Coleman suffered a game-ending knee injury. Cornerback Daryl Worley was inactive for this game due to injury.

After a successful challenge of a Devin Funchess catch gave Carolina a first down on third-and-7, the Panthers quickly picked up 12 yards on a screen pass to Christian McCaffrey, 12 yards on a reverse to Damiere Byrd and the final 28 yards on a screen to Fozzy Whittaker, who nothing but green turf between him and the end zone.

Stephon Gilmore and Devin McCourty both abandoned their posts on Whittaker’s touchdown, allowing the veteran running back to sprint untouched across the goal line.

The first was on him, negating a 10-yard gain. The second, which came on the very next play, was on Panthers safety Mike Adams, who looked helpless matched up with Gronkowski in 1-on-1 coverage down the field. The result was a 33-yard pickup for the Patriots and a pretty fantastic celebration by Gronk.

Five plays later, Tom Brady hit Chris Hogan for a 2-yard touchdown pass to give the Patriots the lead. It was Hogan’s fourth touchdown in the last three games.

Newton attempted to fit a deep pass to Damiere Byrd in double coverage but overthrew his receiver, allowing Butler to catch the ball in stride as he raced toward his own goal line.

It’s now Patriots ball at their own 26-yard line.

First quarter, 4:27, 3-3: An offensive pass interference call on Danny Amendola wiped away a third-down completion to Rob Gronkowski, and Tom Brady was sacked on the following play, resulting in the first punt of the afternoon.

First quarter, 7:41, 3-3: The Panthers’ opening drive played out similarly to the Patriots’.

Cam Newton found tight end Ed Dickson for gains of 25 and 13 yards and wide receiver Devin Funchess for a 14-yard pickup, but the drive ultimately stalled, forcing Carolina to settle for a Graham Gano field goal.

Malcolm Butler started at cornerback for the Patriots and was in coverage on Funchess’ reception. Linebacker Dont’a Hightower also started but came off the field on passing downs. It’ll be interesting to watch his snap count today in his return from a knee injury.

After Chris Hogan was unable to pick up the necessary yardage on third-and-10, Stephen Gostkowski came on to boot a 41-yard field goal.

First quarter, 15:00, 0-0: The Panthers won the opening coin toss and chose to defer. The Patriots will receive the ball to open the first half.

After some Patriots players kneeled during the national anthem last Sunday, all 46 of them stood shoulder to shoulder today.

Every player from both teams stood for the anthem today. Patriots lined up with one hand on their heart, one on a teammate's shoulder. pic.twitter.com/RlOg8M5I86

12:50 p.m.: With kickoff just over 10 minutes away, here’s a quick look at the pregame scene at Gillette today:

12:05 p.m.: Fans who watched “Do Your Job Part 2” know Ernie Adams’ pregame routine involves standing near midfield during warmups and watching opposing players for tells. Today is no different:

Ernie Adams watches opponents before each game for tells. That's him in the khakis eyeing Carolina's punt operation. pic.twitter.com/wPfRBCU6NG

Danny Amendola, Patrick Chung and Chris Hogan are practicing punt returns for the Patriots. Amendola is New England’s top punt returner with Cyrus Jones and Julian Edelman sidelined for the season, but since he’s already been injured on a return once this season, the team needs to have some insurance at the position.

Matthew Slater has yet to play this season as he continues to recover from a hamstring injury. Rex Burkhead misses his second straight game with a injured ribs. And David Harris … man, that signing looks like a big mistake. A star linebacker with the New York Jets for the past decade, Harris has played a grand total of seven snaps through his first three games with the Patriots, and he now is a healthy scratch for the first time.

10 a.m. ET: Greetings from Gillette Stadium, where the New England Patriots are preparing to take on the Carolina Panthers in Week 49 of the NFL season.

The Patriots’ defense should have two key contributors back in action for this matchup, as linebacker Dont’a Hightower and cornerback Eric Rowe both are expected to play after missing last Sunday’s win over the Houston Texans with injuries.

Barring any setbacks, Eric Rowe & Dont'a Hightower will both be active for the #Patriots. Rex Burkhead will NOT be active per source

Hightower has not played since tweaking his knee in Week 1.

The Patriots are eyeing their third consecutive win, while the Panthers are looking to get back on track after being blown out by the New Orleans Saints at home.

Kickoff is set for 1 p.m. ET. Keep it here throughout the morning for more updates and analysis, and be sure to tune into NESN.com’s Patriots pregame show live at 10:30 a.m. on Facebook and YouTube. 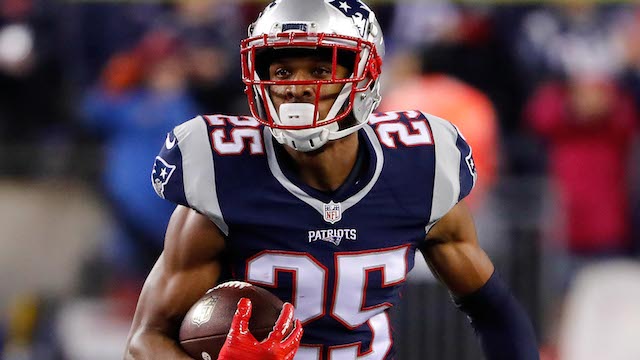 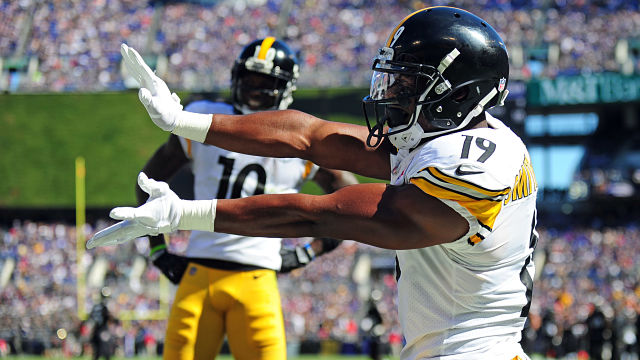