The first period continues to be unkind to the Boston Bruins.

The Bruins found themselves in an early deficit once again Wednesday night, as they allowed three first-period goals to the New York Rangers at Madison Square Garden. New York’s hot start proved to be the difference, as Boston couldn’t recover in a 4-2 loss.

Boston’s offense had a number of strong chances in the contest, but it was no match for Henrik Lundqvist. The Rangers goalie was stellar in the team’s fifth straight win, turning away 25 of 27 shots.

VESEY VAULTS RANGERS
After a relatively quiet first half of the opening period, the floodgates finally opened at the 9:53 mark in the frame.

Pavel Buchnevich put the Rangers on the board with a highlight-reel tally. The New York winger evaded Zdeno Chara with a silky-smooth deke and roofed the puck for his seventh goal of the season.

But it took nearly no time for the Bruins to respond. Just 21 seconds after Buchnevich’s goal, David Pastrnak lit the lamp thanks to a bit of dumb luck. After Patrice Bergeron whiffed on a slap-shot attempt, the ricochet managed to find Pastrnak, who snuck the puck under Lundqvist’s legs.

From there, it was the Jimmy Vesey show. The Harvard product took it upon himself to give the Rangers back the lead, scoring two goals in a matter of 29 seconds. While neither of Vesey’s goals particularly were impressive, the 24-year-old used great positioning in front of the net to notch his third and fourth goals of the season.

Jimmy Vesey with two quick ones and the @NYRangers are up 3-1 heading into the first break! #BOSvsNYR pic.twitter.com/RGU31A48tr

NO DICE
The Bruins, as they’ve done throughout the season thus far, played much better in the second period than they did in the first. Unfortunately for the B’s, Lundqvist pulled out all the stops to make sure the Rangers’ lead stood at two through 40 minutes of play.

Boston was the far more active team on the offensive end in the second period, outshooting New York 13-8 in the frame. The Black and Gold’s strongest chance to light the lamp came on the power play towards the tail end of the period, but Lundqvist stonewalled all scoring chances.

TOO LITTLE, TOO LATE
Bergeron squandered a golden scoring opportunity in the first period, but the star center made his third-period chance count. Just under seven minutes into the final frame, Bergeron jumped all over a rebound to bring the Bruins back within one.

Patrice Bergeron gets the #NHLBruins within 1 pic.twitter.com/DvltQO75k1

Boston kept the pressure on and appeared to be on the verge of tying the game in the latter stages of the period when it held its fourth power play of the game. Unfortunately for the B’s, the man advantage was cut short due to a Pastrnak hooking penalty. From there, the Rangers hung tough for the home win, which was sealed by a Rick Nash empty-net goal with seven seconds remaining.

UP NEXT
The Bruins kick off a home-and-home series with the Toronto Maple Leafs on Friday. Puck drop from Air Canada Centre is set for 7 p.m. ET. 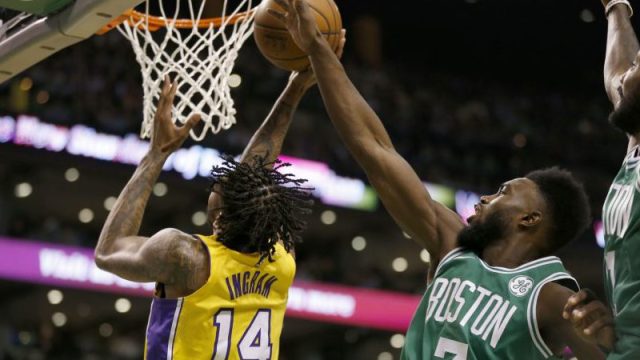 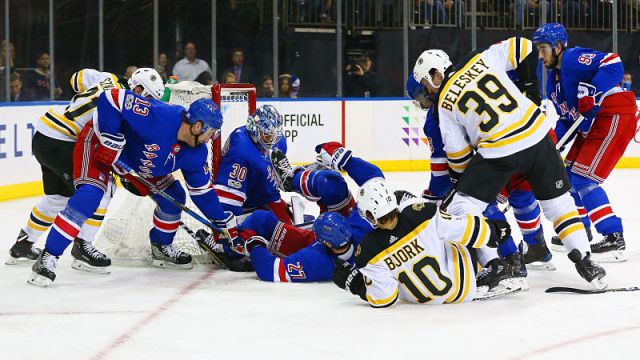 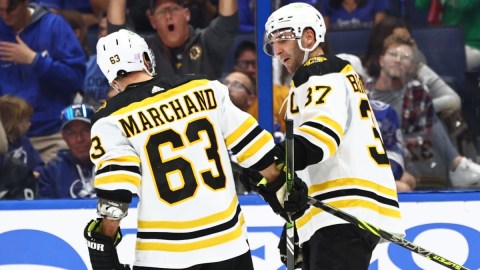