The Boston Celtics have had the best defense in the NBA all season, but it was that part of the game that cost them a victory in Monday night’s 118-108 loss to the Detroit Pistons at TD Garden.

Boston’s defense was subpar right from the start. The Celtics fell behind by double-digits in the first quarter and gave up 60 points in the first half. Detroit moved the ball well, executed pick-and-roll sets effectively and played with a fast pace.

Detroit center Andre Drummond dominated the boards with 22 rebounds, which helped the Pistons earn a 40-36 edge in that department. The Pistons also forced 17 Celtics turnovers and scored 25 points off them. That was a huge difference in the game.

Luckily for the Celtics, they have two days to rest, watch film and find out how to correct their mistakes. Boston doesn’t return to game action until Thursday night when it hosts the Philadelphia 76ers.

Here are some other notes from Celtics-Pistons.

— The Celtics have struggled in first quarters lately, and that was the case again as the Pistons led 31-23 after 12 minutes. Boston has a minus-23 point differential in the first quarter over the last seven games, and the C’s have trailed by eight or more in four of those matchups.

— The Celtics trailed by double digits in the first quarter, marking the ninth game this season they’ve trailed by 10 or more points at any point in a game. Remarkably, Boston has won six of those games, but it couldn’t complete another thrilling comeback against the Pistons.

— Celtics guard Marcus Smart had another good shooting night, hitting on eight of his 13 shots, including a 6-for-9 mark from 3-point range. He had a team-high 23 points.

— Daniel Theis played very well off the bench. He scored a career-high 12 points in 10 minutes. The 25-year-old center shot 4-for-4 from the floor and 4-for-5 from the foul line.

— Free throws continue to be a problem for the Celtics. They shot 12-for-21 (57.1 percent) from the foul line, which made it difficult for them to keep pace with the Pistons’ hot shooting.

— Avery Bradley returned to Boston for the first time since being traded to the Detroit Pistons for forward Marcus Morris in July. Bradley created 11 of the Pistons’ first 14 points and scored six first-quarter points on 3-for-4 shooting. He ended up with 13 points and five assists, plus great perimeter defense on Celtics guard Kyrie Irving.

Bradley has scored the sixth-most points in TD Garden history (1995-96 to the present).

— Drummond plays very well in Boston, and Monday was no different. He pulled down 10 rebounds in the first quarter and finished with 22 overall, along with 26 points. Drummond entered Monday’s matchup averaging 18 points, 15.6 rebounds and 2 blocks per game in his career at TD Garden.

Andre Drummond is the 1st visiting player with at least 25 points, 20 rebounds and 5 assists in Boston since Wilt Chamberlain in 1967.

— Pistons forward Tobias Harris is having a career season. He entered Monday averaging a career-high 18.4 points per game and a 45.5 percent mark from 3-point range. He bolstered those numbers against the Celtics by pouring in 31 points on 11-for-16 shooting (5-for-6 from beyond the arc). 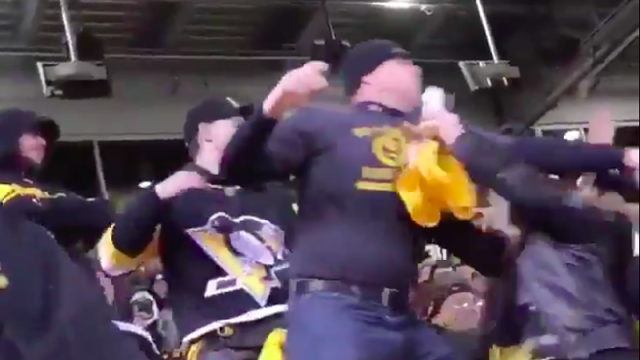 Tom Brady Has Some Soreness After ‘Pretty Physical’ Game Vs. Dolphins