The New England Patriots will need a little help to clinch a first-round bye in this season’s NFL playoffs this week as they take on the Buffalo Bills on Sunday as 11.5-point favorites at sportsbooks monitored by OddsShark.com.

With an 11-3 record, New England already has claimed a ninth straight AFC East crown, but will need an outright victory in Sunday afternoon’s Bills vs. Patriots betting matchup at Gillette Stadium, combined with a loss by the Pittsburgh Steelers or the Jacksonville Jaguars in their respective contests, to assure itself of a first-round bye in the postseason.

The Patriots sewed up a playoff spot with last week’s narrow 27-24 win over the Steelers as 2.5-point road favorites. New England pulled even with the 11-3 Steelers with the victory, which also gives the Patriots the edge on tiebreakers in the hunt for the top spot in the AFC conference standings.

The team returns home riding a three-game SU win streak on home turf, allowing a minuscule 12.33 points per game during that stretch. The Patriots also have turned in solid performances in recent dates with AFC East rivals, winning SU in seven straight before dropping a 27-20 decision to the Miami Dolphins as 10.5-point favorites two weeks ago.

New England also has been a reliable bet on home turf in December, winning and covering in four straight, and going 11-3 SU in its past 14, according to the OddsShark NFL Database.

However, the Patriots must contend with a resurgent Bills team playing meaningful games in late December for the first time in recent memory. Deadlocked with the Tennessee Titans and the Baltimore Ravens at 8-6, the Bills maintain tenuous control of the second AFC wild card on the strength of tiebreakers, and have claimed victory in two of their past three visits to Gillette Stadium while holding the Patriots to a meager 9.66 points per game during that stretch.

Despite their solid play, the Bills do not control their own destiny. Even if Buffalo posts wins over the Patriots this weekend, and over Miami in next weekend’s regular-season finale, they will be bounced from the AFC playoff picture in the event that both the Ravens and Titans close out the season with consecutive victories. Consequently, the Bills are pegged as an underdog +190 wager to see their 19-year playoff drought end this season.

Following Sunday’s contest, the Patriots will be closely watching as the 10-4 Jaguars look to stay in the hunt for a first-round bye as they face Jimmy Garoppolo and the San Francisco 49ers as 4-point favorites in a late-afternoon matchup, while the Steelers visit the Houston Texans as 8.5-point favorites on Christmas Day. 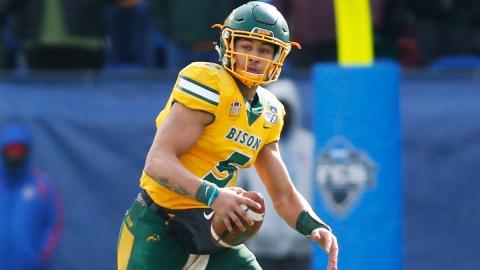