Once again it’s the New England Patriots and everyone else. The Patriots won their eighth straight game Sunday by dismantling the Buffalo Bills and now appear to be the clear-cut best team in the NFL after the Philadelphia Eagles were handily beaten by the Seattle Seahawks.

Here?s a look at where each team stands in NESN.com?s NFL power rankings as we head into Week 14. (To see our Week 13 power rankings, click here.)

1. New England Patriots (10-2; last week’s rank: 2): Tom Brady had the worst game of his season, but the Buffalo Bills still were unable to challenge New England, as the Patriots rolled to a 23-3 win at New Era Field. New England will go for its ninth straight win on “Monday Night Football” against the Miami Dolphins but might be without Rob Gronkowski who was suspended for one game for a cheap shot on Bills cornerback Tre’Davious White.

2. Philadelphia Eagles (10-2; 1): The Eagles saw their nine-game winning streak come to an end in Seattle, as the Seahawks’ defense was able to bottle up Philadelphia’s potent rushing attack in a 24-10 win.

3. Minnesota Vikings (10-2; 3): Minnesota stymied a red-hot Atlanta Falcons offense Sunday, holding Julio Jones to 24 yards on two catches and allowing just one third-down conversion. The Vikings currently hold the NFC’s top seed thanks to a strength of schedule tiebreaker over the Eagles.

4. Los Angeles Rams (9-3; 4): The Rams took care of business against the Arizona Cardinals in Week 13 to secure the team’s first winning season since 2003. Next up: the Eagles.

5. New Orleans Saints (9-3; 5): Alvin Kamara joined Eric Dickerson and Franco Harris as the only rookies to tally 100 yards from scrimmage and a touchdown in five straight games. The Tennessee product has all but locked up the Offensive Rookie of the Year honors.

6. Pittsburgh Steelers (10-2; 6): Pittsburgh continues to play down to mediocre opponents, squeaking by the Cincinnati Bengals 23-20 on “Monday Night Football,” one week after edging the Green Bay Packers 31-28. They’ll face the rival Baltimore Ravens in Week 14 before a crucial showdown with the Patriots.

7. Seattle Seahawks (8-4; 9): Russell Wilson and Co. proved they’re still a team to be reckoned with after dominating the Eagles in Week 13. Wilson has accounted for 88 percent of the Seahawks’ touchdowns on the season, and he should be a leading MVP candidate along with Brady.

8. Carolina Panthers (8-4; 7): Carolina doesn’t have the look of a contender, as they once again were unable to stop the Saints’ offense. The Panthers need to beat the Vikings in Week 14 to prove they belong in the playoffs.

9. Jacksonville Jaguars (8-4; 11): Jacksonville bounced back from its Week 12 loss to the Cardinals by hammering the Indianapolis Colts 30-10. QB Blake Bortles threw for 309 yards and two touchdowns as the Jaguars clinched their first non-losing season since 2010.

10. Atlanta Falcons (7-5; 8): Coming off three straight wins, the Falcons fell on their face in Sunday’s loss to the Vikings. Atlanta now finds itself on the outside of the playoff picture and faces a must-win game Thursday night against the Saints. Good luck.

11. Tennessee Titans (8-4; 10): The Titans continue to win ugly, as Tennessee fell behind the Houston Texans 10-0 on Sunday before rallying to earn a 24-13 win to stay atop the AFC South.

12. Los Angeles Chargers (6-6; 13) From 0-4 to a tie for first place in the AFC West, the Chargers have had a roller coaster season and all of a sudden look like the favorites to win the division.

13. Baltimore Ravens (7-5; 16): The Ravens pantsed the Detroit Lions 44-20 to maintain a one-game lead for the sixth and final spot in the AFC playoffs. Is it time to take the Ravens seriously? No.

14. Dallas Cowboys (6-6; 19): Dallas hammered the Washington Redskins to end their three-game losing streak. The Cowboys likely will need to win out in order to make the playoffs, though.

15. Detroit Lions (6-6; 14): In a must-win game, the Lions laid an egg and quarterback Matthew Stafford exited with a hand injury. Better luck next year.

16. Kansas City Chiefs (6-6; 12): Kansas City can’t get out of its own way, as the Chiefs have lost six of its last seven games after losing to the New York Jets at MetLife Stadium. The Chiefs will face the Oakland Raiders and the Chargers in the next two weeks to likely decide the AFC West.

17. Oakland Raiders (6-6; 18): Marshawn Lynch (101 yards, touchdown) ran over the New York Giants to bring the Raiders back to .500. Unfortunately for Oakland, though, it closes the season with the Chiefs, Cowboys, Eagles and Chargers. Ouch.

18. Green Bay Packers (6-6; 22): Somehow the Packers still are alive (barely) in the NFC playoff race. A win against the Cleveland Browns in Week 14 will put them at 7-6 with Aaron Rodgers likely returning against the Panthers in Week 15. Hold on to your butts, Packers fans.

19. Buffalo Bills (6-6; 15): Another year, another brutal performance by the Bills against the Patriots. Same Bills, different season. See you in 2018.

20. New York Jets (5-7; 24): Todd Bowles somehow has been competitive with the Jets’ less than ideal roster. They can get their sixth win (which seemed impossible during the preseason) when they face the 3-9 Denver Broncos on Sunday.

22. Washington Redskins (5-7; 17): It’s on to 2018 for the Redskins after getting dusted by the Cowboys in Week 13. Will they sign Kirk Cousins to a long-term deal or let the erratic signal-caller walk?

23. Arizona Cardinals (5-7; 21): Blaine Gabbert turned back into Blaine Gabbert during the Cardinals’ loss to the Rams. There’s good news though, as Arizona will face a mediocre Titans secondary in Week 14 that made Tom Savage look semi-competent.

24. Miami Dolphins (5-7; 26): The Dolphins proved they’re better than the Broncos which might count for half of a win.

26. Tampa Bay Buccaneers (4-8; 25): Jameis Winston came back and the Bucs still lost to Brett Hundley and the Packers. Expect wholesale changes for Tampa Bay this offseason.

28. Indianapolis Colts (3-9; 28): The Colts were pummelled by the Jaguars on Sunday, assuring the Chuck Pagano of a losing season in what almost certainly is his last.

29. San Francisco 49ers (2-10; 31): Things look a little better in the Bay Area now that Jimmy Garoppolo has taken over the offense.

30. Denver Broncos (3-9; 29): Denver has lost eight straight, and according to head coach Vance Joseph, there is “no surviving.”

31. New York Giants (2-10; 30): The Giants benched Eli Manning for Geno Smith and lost anyway. Smith then blasted former coach Rex Ryan after the game and then New York fired head coach Ben McAdoo on Monday. Oh, and Manning once again will be the starter. What a week. 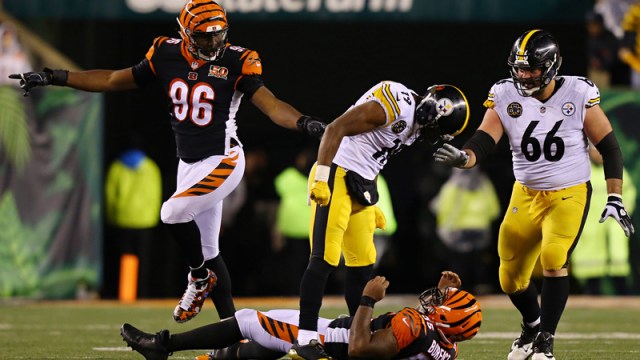