Patriots cornerback Stephon Gilmore had himself a game Sunday in his return to Buffalo in New England’s 23-3 win over the Bills. Want some proof?

Stephon Gilmore got a smile out of Bill Belichick yesterday. pic.twitter.com/KkxCjlbhLv

Yes, that’s Bill Belichick walking up to a player, shaking his hand, hugging him, slapping him on the shoulder and smiling widely. Do you think Belichick might be happy with his $65 million investment? He should be.

Gilmore allowed two receptions on eight targets for 22 yards with two pass breakups Sunday against his former team. He showed off his strong tackling ability on the first reception he allowed, stopping receiver Zay Jones  short of a first down.

On the other reception — a 13-yarder — Gilmore actually broke up the pass, but it deflected into Jones’ hands. CBS color analyst and former NFL quarterback Tony Romo called it perfect coverage. It was. It was also bad luck. Gilmore actually got up and celebrated the play before realizing the pass was caught.

That was one of four times the Bills targeted Gilmore on a single fourth-quarter drive. It was the only reception he allowed in that series, but it was the first of three times he got his hand on the ball.

On first-and-goal at the Patriots’ 7-yard line, Jones ran an out-and-up route into the end zone. Gilmore, with his back turned, read Jones’ eyes and threw his arm up as the Bills’ receiver was hauling in the ball, jarring it loose.

It was perfect technique for a Patriots cornerback.

After Peterman completed a 6-yard pass to running back LeSean McCoy over safety Jordan Richards, Gilmore was targeted again on fourth-and-goal from the 1-yard line on a fade route by Jones.

Gilmore deflected that pass out of the air, as well, gaining better leverage and high-pointing the ball.

Back to Stephon Gilmore and Zay Jones on the fourth-down fade. pic.twitter.com/JuQymLtlFM

Gilmore was almost unbeatable Sunday. Since coming back from a concussion and ankle injury, Gilmore has been one of the best cornerbacks in the NFL. The Patriots are looking very smart for locking him up on the first day of free agency.

Here are some more observations from this year’s film review:

— Below is the play that caused the blowup between quarterback Tom Brady and offensive coordinator Josh McDaniels. The lip-readers out there could see McDaniels saying “wide open.” It’s unclear if he was talking about Phillip Dorsett, on the left, Brandin Cooks, on the right, or even tight end Rob Gronkowski, who eventually found himself alone in the end zone.

Phillip Dorsett and Brandin Cooks were wide open on the incompletion that sparked the screaming match between McDaniels and Brady. pic.twitter.com/Jr68GEgMEO

— It was interesting to see Gronkowski targeted four times on one drive late in the fourth quarter. The final target was Brady’s interception, which led to Gronkowski’s post-play dive at Bills cornerback Tre’Davious White. Gronkowski was suspended for throwing his shoulder into White’s helmet.

Gronkowski is known as an injury-prone player, so it was notable to see him heavily utilized late in a game the Patriots clearly were going to win. Gronkowski has playing-time and statistical-based incentive in his contract.

— Defensive tackle Malcom Brown didn’t play a perfect game, but he made disruptive plays as a pass rusher and run defender.

— Rex Burkhead has proven to be a solid short-yardage option in the Patriots’ offense. He’s only 210 pounds but runs hard and can find the end zone deep in the opponents’ territory.

— Burkhead and Dion Lewis both were able to rip off chunk plays.

Lewis finished his off with a mean stiff arm.

The Patriots’ offensive line deserves a lot of credit for those plays. Right tackle Cameron Fleming — the Patriots’ No. 4 offensive tackle — had a particularly strong game overall. He didn’t allow a sack and helped spark Burkhead’s second touchdown. Guards Shaq Mason and Joe Thuney impressed with their pull blocks.

— Romo revealed Brady and wide receiver Danny Amendola didn’t know who Eric Lee was when he recorded a sack last week against the Dolphins.

Tony Romo shared a pretty funny story yesterday about Brady and Amendola having no idea who Eric Lee was during the Miami game. pic.twitter.com/PYtm79N4Eg

Everyone should know who Lee is after the last two weeks. He has eight tackles, 2.5 sacks, four quarterback hits, an interception and two pass breakups.

Eric Lee is having the time of his life. pic.twitter.com/YyrfDA8qUV

It’s easy to see why the guy is becoming a New England cult hero. 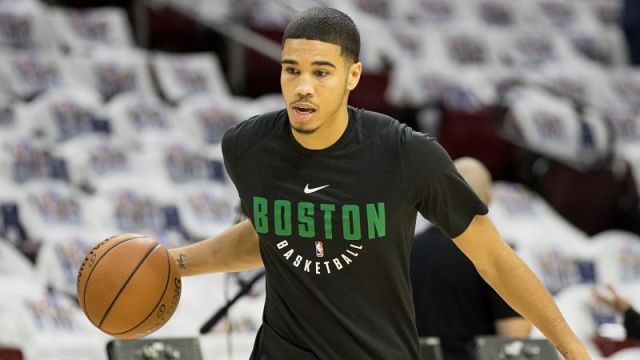 Celtics’ Jayson Tatum Has Hilarious Reason For Not Missing College 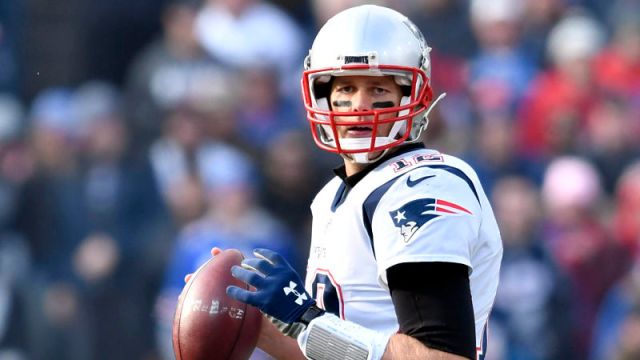