Patriots-Dolphins Film Review: What Went Wrong On Third Down? - NESN.com Skip to content

Tom Brady is the greatest quarterback in NFL history, but he definitely didn’t look like it Monday night in the New England Patriots’ 27-20 loss to the Miami Dolphins.

Know how you can tell? You could actually compare his performance Monday to Patriots great (that’s sarcastic) Hugh Millen. The Patriots didn’t convert on third down in Week 14 for the first time since Millen was under center in 1991. That’s bad. And it also happened without tight end Rob Gronkowski, so it’s at least partly understandable.

The Patriots officially were 0-for-11 on third down, but that doesn’t count three penalties, two of which, both defensive pass interference flags, went for first downs. The third penalty was a defensive neutral zone infraction that put the Patriots in a third-and-1 situation. They still couldn’t convert.

The Patriots dropped back to throw the ball on every third-down play, and Brady went just 2-of-10 for 12 yards with two interceptions and a sack.

Brady’s first third-down attempt was an interception on a deep target to wide receiver Brandin Cooks.

Brady severely underthrew Cooks, and even if he didn’t, there was a safety coming over the top on the play. Brady acknowledged after the game his two interceptions both came on third and long. They essentially were arm punts, but the Patriots obviously would have preferred to actually move the chains or hit on a big play.

Beyond Brady’s weak throw, Cooks also wasn’t able to win a contested catch. Dolphins cornerback Xavien Howard completely overpowered him. That’s the risk involved in chucking deep to Cooks. If he isn’t running past the defense, then he probably isn’t going to pry the ball away from a defender.

Brady, who’s playing through an Achilles injury, also underthrew Chris Hogan on third-and-8 with 3:04 left in the first quarter. Cornerback Alterraun Verner also got his hand on the ball. The Patriots faced third down again with 12:06 left in the second quarter with 4 yards to go and attempted a pick play. The Patriots ran into an issue when Howard jammed Cooks at the line, and the Patriots receiver struggled to get upfield. Ideally, Cooks not only frees up space for Burkhead to run an in route at the first-down line, but he also blocks linebacker Kiko Alonso, in coverage on Burkhead, out of the play. Cooks wasn’t getting upfield, so Burkhead actually had to cut back to get into his route. He suddenly was running the route 2 yards shy of the first-down marker, and Alonso read the play perfectly. Accounting for forward progress, Burkhead was stopped a yard shy of the first down. There was a failure to execute on the Patriots’ part, and the Dolphins read it well. The Patriots successfully drew a defensive pass interference penalty 3 yards from the end zone on their next third-down opportunity. Burkhead scored on the next play.

The Patriots ran a shovel pass to running back James White on third-and-3 with 46 seconds left in the half. White wasn’t fast enough to get to the edge, and Hogan whiffed on a block. The play was 2 yards short of a conversion, and the Patriots settled for a field goal.

Brady’s first third-down play of the second half was intercepted. He simply held onto the ball too long and attempted way too long of a throw. There was no way Brady was going to lead Cooks on what was a 65-yard pass attempt.

Xavien Howard comes up with his second interception of Tom Brady tonight….and this one is even better than the first ???#finsUP pic.twitter.com/RukdgoqKxp

Dolphins pass rusher Cameron Wake jumped offsides for a neutral zone infraction on the next third-down opportunity, then the Patriots failed to convert on third-and-1. Brady attempted a back shoulder pass to Cooks, but he didn’t get enough juice on the throw, and Howard broke it up.

The Dolphins committed another defensive pass interference penalty on a deep throw to Hogan, putting the Patriots at their own 32-yard line. Three plays later, Brady threw an incomplete deep pass to Hogan, and the Patriots failed to capitalize on the Dolphins’ mistake. It was an odd play on which Hogan appeared to give up. The ball is falling in front of Hogan, and he didn’t go for it.

Brady held the ball too long again with 11:05 left in the fourth quarter, facing third-and-8. He evaded one sack before Ndamukong Suh brought him down after Brady stood in the pocket for nearly 5 seconds.

On third-and-4 with 7:17 left in the fourth quarter, Brady threw to Cooks, who didn’t look like he was anticipating the target. The Patriots played the field-position game on third-and-20 with 4:58 left in the fourth quarter, when Brady hit Amendola for 9 yards on a play that had no chance to pick up 20. Brady threw incomplete to Amendola again on third-and-goal at the 15-yard line with 1:02 left in the game. Howard probably could have been called for defensive pass interference on the play.

And that was the extent of Patriots’ third-down failures.

The Patriots also called a strange play on that same final drive at the end of the fourth quarter, when, on first-and-goal at the 1-yard line, the Patriots had Brady roll out and attempt a pass to Hogan. Tight end Dwayne Allen also was an option on the play. An illegal motion call on White pushed the Patriots back 5 yards.

The Patriots called consecutive roll outs near the goal line earlier in the fourth quarter. Brady completed the first pass to Amendola for 4 yards. The Patriots scored the next play on a rollout to White for a 3-yard score, so that was the thought process behind the play.

Despite the success earlier in the game, the much safer option would have been for the Patriots to run the ball at the 1.

It’s unlikely the Patriots’ third-down struggles will continue, but their performance Monday night did show some weaknesses that previously were masked by Gronkowski. They’ll have to rebound Sunday afternoon in a must-win game against the Pittsburgh Steelers. 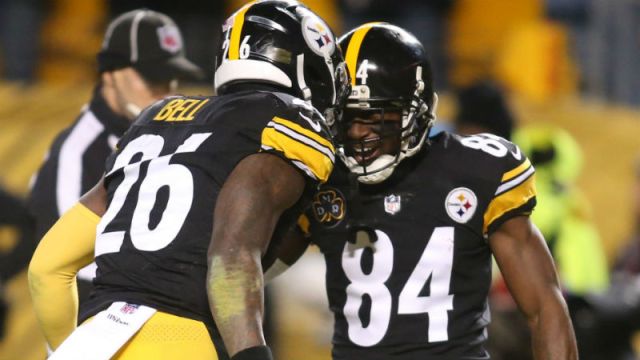 Scouting The Steelers: Can Patriots Slow Down Killer B’s In Game Of The Year?