A short week is never fun for NFL teams, but the New England Patriots probably are pretty happy they can quickly get over their loss to the Miami Dolphins.

And after a dominant nine-week stretch, it’s probably not the worst thing to have a motivated Patriots team heading to Pittsburgh for a must-win game against the Steelers.

The Patriots’ top running back was a 32-year-old Corey Dillon, and 2006 was one of Kevin Faulk’s least productive seasons.

Brady’s weapons were better in 2005, but they still pale in comparison to this season’s. Deion Branch, David Givens, Troy Brown and Dillon were solid but unspectacular that season, but they didn’t have a dominant playmaker like Rob Gronkowski.

In 2013, Gronkowski played just seven games and Danny Amendola was banged up all year, so it was basically the Julian Edelman show. The Patriots’ third- and fourth-most targeted players were Aaron Dobson and Kenbrell Thompkins, neither of whom currently are in the NFL.

This isn’t the strongest set of targets Brady has had in his career, but when his tight end is active, Brady has a wealth of weapons in Gronk, Brandin Cooks, Chris Hogan, Danny Amendola, Dion Lewis, Rex Burkhead and James White.

Does this season seem eerily 2015ish to you too? #MailDoug
— @ScarlettJoce
Oh man. The Patriots lose once, and then the sky is falling.

The Patriots’ injuries this season might be even worse than they were in 2015, but they’re also better prepared for them this year. The Patriots were left without a running game in 2015 after LeGarrette Blount and Lewis went on injured reserve. That became an issue.

I also think the NFL, overall, is weaker this season. Every good team has lost elite players.

I think one of the lessons of this season is the 2016 Patriots would absolutely smoke anyone in the NFL right now, including the 2017 Patriots.

I’m not really sure what else to add to that.

I think we all knew that after he looked spectacular at the beginning of last season, right? Or at least we should have?

It was concerning that Jimmy Garoppolo got hurt in his second career start, but that also didn’t necessarily make him fragile or injury prone. Garoppolo has a very, very bright future with the 49ers.

Did the loss to Miami reveal any legitimate issues with the Pats going forward, or did they just have a bad game, as teams typically do?
— @BOwens31
The only legitimate issue revealed is the Patriots would struggle offensively without Gronkowski, but we already knew that.

I expect a full bounce-back Sunday afternoon against the Steelers. And after the Ravens scored 38 points on the Steelers on Sunday night, I fully expect the Patriots’ offense to go off in Pittsburgh.

@maildoug what’s the vibe around the team after the loss Monday?
— @rickeyeasterjr
It’s been pretty normal this week.

I think something funny is just how down and dour the team is immediately following a loss. It legitimately feels like someone died in the locker room after every loss.

That’s usually pretty shocking for players who come to the Patriots from teams that are used to losing.

Do you think the patriots take a QB in the high rounds of the draft? If so who do they take? Any chance they go after Josh Allen if he falls?
— @PointlessDude
I haven’t watched enough of the college quarterbacks to know who they would select, but I do think they’ll take one very high.

I actually think it makes the most sense to take a QB with that late first, because then they’ll get to use a fifth-year option on that player.

If the Patriots had spent a first-round pick on Garoppolo rather than a second-rounder, then they could have bought an extra year with him. In retrospect, that would have made sense, since Dominique Easley, their first-round pick in 2014, lasted just two seasons.

Who will the Patriots use to cover Antonio Brown? Butler struggled with Emmanuel Sanders and I am having flashbacks.
— @LFNJSinner
Brown is a player the Patriots really struggle to neutralize. I think Malcolm Butler will be assigned to Brown, but so will a safety, whether that’s Devin McCourty or Duron Harmon.

Brown can’t really be stopped. But the Patriots can at least try to keep him from completely taking over the game.

Do you see Kenny Britt having a big impact on the Patriots offense or is this 2017?s Michael Floyd signing?
— @gbloftus
I think the most likely scenario is Britt will have a similar impact in 2017 as Floyd had in 2016, but he’s not the 2017 version of Floyd. Let me explain.

The Patriots claimed Floyd off waivers from the Arizona Cardinals last season when he was on the final year of his contract. He became an unrestricted free agent and signed with the Minnesota Vikings.

The Patriots signed Britt to a two-year deal. So, while Floyd was just a late-season addition, Britt can actually come back next year and compete for a role in training camp while having a head-start on learning the offense.

I also think it’s smart to add wide receivers late in the season, since Hogan and Amendola already have suffered injuries this season. The Patriots desperately needed height at receiver when Hogan was out.

How do the reporters attending practice count the players at practice (and who’s not)? Divvy up position groups between yourselves and share results? #MailDoug
— @artiejj
The best system is to have one person with binoculars yell out names and numbers and have someone else crossing them off. I’m usually the crosser-offer. Mark Daniels of the Providence Journal and Jeff Howe of the Boston Herald typically take on the binocular role.

what product has received the highest number of bugs/buds in recorded history
— @mattyports
I think regular Oreos received the most buds (a positive rating) in my “Doug’s Bugs” Instagram food review show history.

Key lime Twizzlers were probably the most heavily panned and received the most bugs. I like key lime and Twizzlers, but it was a terrible combination.

@DougKyed what?s your favorite Christmas treat? #maildoug
— @alexbyersays
I like a good log cake. I like Reese’s trees. I like those dark chocolate orange things that you have to break open that for some reason only are available around Christmas. I’m a big fan of Christmas almond M&Ms. I think pumpkin pie also is an acceptable Christmas treat.

My question Dougstradamis who’s coming back off IR
— @Captmike24
Probably no one. If they haven’t started practicing yet, and if the Patriots are willing to roster players like Bernard Reedy, then I just can’t see it happening this season.

Is the defense good
— @Caleb4Bama
Yes.

In your educated opinion, where is Josh McDaniels coaching next year? #MailDoug
— @sko_Pats
New England.

@DougKyed more likely scenario: Belichick saying “kiss the rings” at a press conference when pressed about touchy topic or Jimmy G returning to New England
after being tagged a few times by the 49ers and contract talks fall apart (Jimmy and Caserio’s secret plan all along). #MailDoug
— @JosBaskinRobin
The latter. And it would be kind of incredible if Garoppolo was franchised twice then re-signed with New England after Brady retires.

Who has the best color rush uniforms? How do you feel about sky cam? Who?s your favorite current WWE wrestler? Do you like @EmersonLotzia? What do you want for Xmas? Favorite number? Do you like snow? Is your Xmas tree real or fake? #maildoug
— @JeffWIIM
1. Probably the Chargers, but your Lions have good ones, too, Jeff.

Keenan Allen and the ??royal blue color rush jersey from his historic game vs. the Browns in Week 13 is now on display in Canton #Chargers https://t.co/oM1ao0O59i

The @Lions will be wearing their silver/gray color rush uniforms SATURDAY (12/16) versus the @ChicagoBears pic.twitter.com/RjXjJ0G0dR

The Giants have good all white ones, too.

5. I want a quick and uneventful game against the Buffalo Bills so I can go home early on Christmas Eve.

8. My Christmas tree is real, and it’s spectacular. 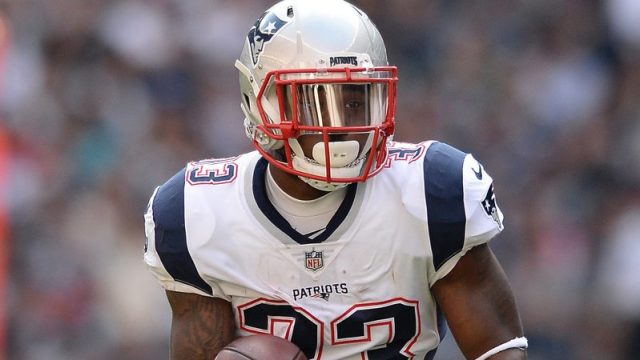 Is Patriots Vs. Steelers Biggest Regular-Season Game Of Belichick/Brady Era?