The New England Patriots and Pittsburgh Steelers will square off Sunday afternoon at Heinz Field with first place in the AFC on the line.

Here’s what to watch for in the game of the year:

INJURY REPORT
Defensive tackle Alan Branch already has been ruled out after not practicing all week, and 10 other Patriots are listed as questionable, including defensive end Trey Flowers and linebacker Kyle Van Noy.

The Patriots’ defense really struggled against the Miami Dolphins with Flowers and Van Noy both sidelined, so having one or both of them back would be a huge boost against this loaded Steelers offense.

New England also will be without starting right tackle Marcus Cannon, who was placed on injured reserve this week after missing five games with an ankle injury. LaAdrian Waddle and Cameron Fleming both have started in place of Cannon this season, and it remains unclear who will get the nod this weekend.

The Steelers, meanwhile, will have their top three offensive weapons (quarterback Ben Roethlisberger, running back Le’Veon Bell and wide receiver Antonio Brown) healthy and ready to go. That was not the case in either of last year’s Patriots-Steelers matchups, as Roethlisberger missed their regular-season meeting and Bell hardly played in the AFC Championship Game after tweaking his groin.

Pittsburgh’s defense isn’t so fortunate. It will be without star linebacker Ryan Shazier, who remains hospitalized after suffering a serious spinal injury two weeks ago. The Steelers also have some uncertainty on both sides of the ball, as wide receiver JuJu Smith-Schuster and cornerback Joe Haden both are listed as questionable.

PATRIOTS’ OFFENSE VS. STEELERS’ DEFENSE
The Steelers have allowed the seventh-fewest points in the NFL this season, but they were a bit of a mess defensively in their first game without Shazier, allowing 38 points in a win over the Baltimore Ravens.

Pittsburgh was especially weak against the run in Shazier’s absence, allowing Alex Collins to go off for 120 yards on 18 carries. The Patriots could look to exploit this with Dion Lewis and Rex Burkhead, who saw just 10 carries between them last week after combining for 322 rushing yards over the previous two games.

This Steelers defense also has not significantly changed from the one Tom Brady torched for 384 yards and three touchdowns in the AFC title game. Pittsburgh’s coaches spoke all offseason about playing more man defense to prevent performances like that, but so far, they’ve still been primarily a zone team.

Will that change this week against Brady, who is coming off one of his worst games of the season? We shall see.

The Patriots will have Rob Gronkowski back for this contest after the big tight end was suspended for the Dolphins game. Gronkowski has dominated the Steelers throughout his career, catching 30 passes on 36 targets in five games against Pittsburgh and averaging 99.2 receiving yards per game.

Brown leads the NFL in catches and receiving yards by a wide margin, Bell is the league leader in rushing yards and yards from scrimmage, and Roethlisberger ranks second in passing yards behind Brady. The Patriots’ defense had been on a roll before allowing 27 points to the Dolphins on Monday, but this will be its toughest test yet.

Shutting down both Brown and Bell is unrealistic, so New England likely will focus on limiting one of them. The safer bet might be to double-cover Brown throughout the game — easier to do if Smith-Schuster is out — and make Bell beat them on the ground. Bell also is one of the league’s best pass-catching backs, though, and the Patriots always seem to have issues covering running backs out of the backfield.

It will be interesting to see how the Patriots choose to cover Brown, who is averaging 9.8 catches, 156.8 receiving yards and 1.5 touchdown receptions over the past four weeks.

Malcolm Butler handled most of those duties last season, though their coverage varied more in the AFC title game as Pittsburgh moved Brown around the formation more often. Stephon Gilmore fared well against Brown, too, when the Steelers played the Buffalo Bills last season, allowing just two catches on six targets for 27 yards when matched up against him. Gilmore also picked off a Roethlisberger pass that was intended for Brown. 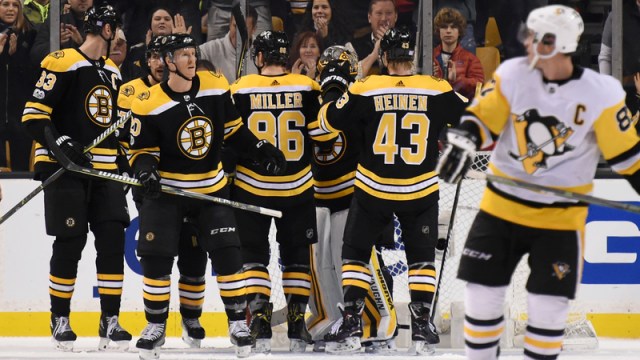 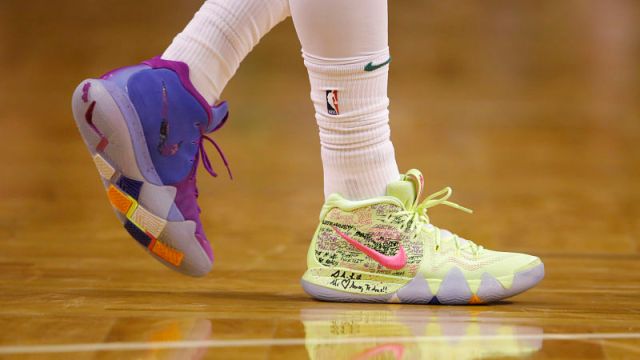 Is Kyrie Irving Making Yet Another Flat-Earth Statement With New Nikes?