What Went Into James Harrison Picking Up Patriots Defense In Five-Day Span - NESN.com Skip to content

FOXBORO, Mass. — New England Patriots linebacker James Harrison made his NFL debut over 15 years ago, but this was one of the most difficult five-day spans of his career. That’s saying something.

Harrison signed with the Patriots on Tuesday, practiced with the team just three times, had a little less than five days to learn their defense and finished New England’s Week 17 win over the Jets with 30 snaps, two sacks, a hurry, five tackles and a forced fumble. He played just 40 snaps in 16 weeks with the Pittsburgh Steelers before being released last week.

The 39-year-old said picking up the defense in such a short timeframe was “definitely” one of the most difficult tasks of his career. He also stressed that he is “not acclimated” just yet.

“It’s like starting all over from scratch,” Harrison said. “It’s like starting your rookie year over. New game plan, you gotta pick things up. Except for, when you’re a rookie, you get OTAs and minicamp, and I got four or five days to prepare.”

Fortunately, he joined a team that’s quite used to getting new players up to speed.

“I was getting a lot of help from the guys who were out there who have been here,” Harrison said. “They were helping me to get lined up, and if I didn’t know something, I would give them a look.”

Patriots head coach Bill Belichick didn’t want to talk about Harrison after New England acquired him. But Belichick was downright loquacious Sunday when asked about the work Harrison put in during the week to take on such a heavy workload.

“James worked really hard, worked really hard to get things down and to handle the roles that he was in today,” Belichick said after the game. “Very professional, has a lot of experience but not in this system. So, he had to do a lot of things to try to acclimate himself to what we do and terminology, adjustments and so forth. He really worked hard at that.

“He got better every day. You could see that through the course of the week. Sometimes it piles up, and the load just becomes — there’s a diminishing return effect. In his case, I would say that wasn’t the case. Each day it went, it got better. I thought he made a couple plays out there today. See how it goes moving forward, but he worked very hard.”

So, why is Harrison still putting in all that work 15 seasons into an already highly successful NFL career that includes five Pro Bowl nods, four All-Pro honors, two Super Bowl wins and an NFL Defensive Player of the Year award? Why didn’t he just decide to walk away when the Steelers decided they didn’t need him?

He also seems like a natural fit for the Patriots. When asked about the playoffs or the two-week gap he can spend learning the defense, he only would say that he’s looking forward to Monday, or “leg day” in the weight room. 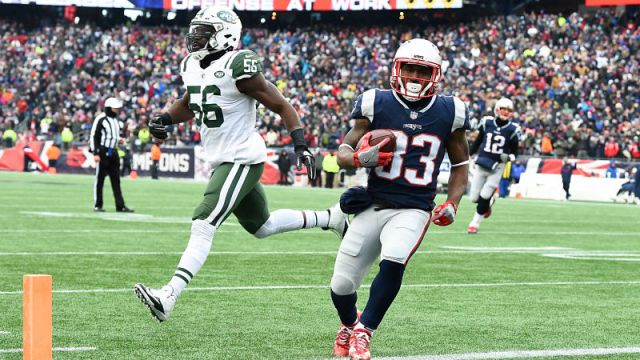