Craig Kimbrel Opens Up About Baby Daughter's Health Issues And How It Motivates Him - NESN.com Skip to content

MASHANTUCKET, Conn. — Early during the 2017 season, Craig Kimbrel and his wife Ashley got news no parents want to hear.

The Kimbrels learned their baby, due in the fall, would be born with a heart defect. If it was bothering Kimbrel, it certainly didn’t show in what he was able to do between the lines.

The Boston Red Sox closer had one of the best seasons of his career. He saved 35 games for the Red Sox, striking out an absurd 126 batters in just 69 innings to go along with a razor-thin 1.43 ERA, even finishing sixth in American League Cy Young Award voting.

He managed to get through the season, and on Nov. 3, he and Ashley welcomed Lydia to the world. Lydia’s health issues prompted the Kimbrels to spend the offseason in Boston, allowing them to be close to Boston Children’s Hospital. Lydia already has undergone one surgery and is scheduled for another in spring training for which Kimbrel will return to Boston for a week.

“It’s been tough, but it’s been one of the happiest, joyful times of my life,” Kimbrel said Saturday at the Red Sox Winter Weekend at Foxwoods.

The Kimbrels have spent plenty of time in the hospital this winter, as they were there for a month initially before returning home for 20 days which then was followed by another eight-day stint in the hospital. They’ve been home since New Year’s, though, and while they’re not out of the woods, things have gone well so far.

Kimbrel said Saturday that Travis Shaw’s baby had a similar condition, and their wives have leaned on each other throughout the process. The 29-year-old right-hander also said his wife has used social media support groups for more information.

“At first, it was a little difficult,” Kimbrel said. ” … It’s still been hard, but the doctors at Children’s Hospital have been unbelievable, the nurses and everybody there, they’re just so compassionate and understanding and explaining everything to you and what to expect.”

The whole ordeal has changed Kimbrel’s perspective on life, as it would for anyone, but it hasn’t taken away any of his drive to have success on the baseball field. If anything, it’s done the opposite.

“It’s actually motivated me even more,” he said. “They say when you have a child things and views change, and they have. They’re definitely more focused toward her and her needs and the family needs. It’s just one day at a time and I give it everything I got, and it’s easy to look at her and understand everything I’m doing is for her and makes it a lot easier.”

And the best news is Lydia is doing well.

“Just right now if everyone could have us in their prayers, she’s doing great,” Kimbrel said. “Overall, she’s doing fantastic.” 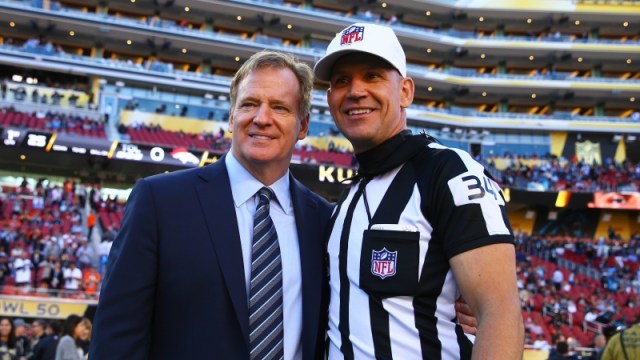 Patriots Vs. Jaguars Referee Has Interesting History With New England