The Patriots need a young quarterback to groom under starter Tom Brady after trading former backup Jimmy Garoppolo to the San Francisco 49ers.

There’s one more connection between Lauletta, who was named the Senior Bowl’s Most Outstanding Player on Saturday, and the Patriots. Lauletta’s college roommate, David Jones, is a Patriots practice squad safety.

NESN.com caught up with Jones this week as the Patriots packed for their Super Bowl LII trip to Minnesota to face the Philadelphia Eagles. Jones believes his former college teammate has what it takes to become his future teammate, as well.

“He’s a hard worker, great kid, works hard in the classroom and on the field, and that obviously showed out in his performance,” Jones said in the Patriots’ locker room Sunday. “We spent a lot of time together. We kinda have the same mindset. We just like to work hard.”

Jones and Lauletta both went the FCS route in college, but the Patriots safety quickly could see his quarterback was headed for the NFL.

“Oh yeah. When he first got there, I just knew,” Jones said. “I saw his work ethic, and I saw he was passionate about the game of football. He loved it. I could see it in him, and it was just a matter of him working at it, and he does that every day.”

Lauletta currently is rated as a low-round draft pick, but his stock could soar after an impressive Senior Bowl performance. Lauletta had a solid week of practice, according to those on the scene, and he completed 8-of-12 passes for 198 yards with three touchdowns and no interceptions in the game.

His size and skill set have been compared to Garoppolo’s. Lauletta is 6-foot-3, 217 pounds.

It?s the feet that look so similar RE: Kyle Lauletta and Garoppolo pic.twitter.com/nJRW5Z6JtG 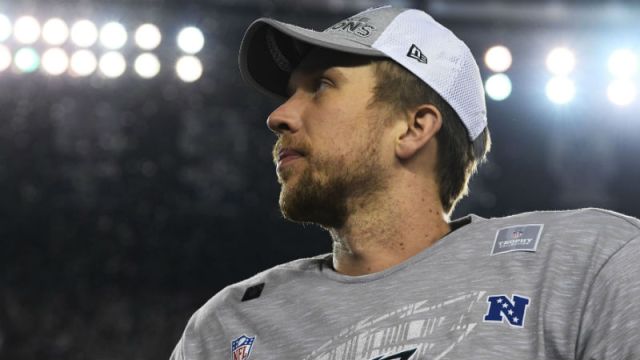