FOXBORO, Mass. — The 2017 New England Patriots are not interrupting the now-annual tradition of appearing in the AFC Championship Game.

The Patriots will play in their seventh consecutive AFC title game next Sunday after drubbing the Tennessee Titans 35-14 in the divisional round at home.

The Patriots played well in all facets of Sunday’s game, going on a 35-point run after letting up a first-quarter touchdown to the Titans.

Here are this week’s standouts.

QB TOM BRADY
It was a vintage playoff performance for Brady, who went 35-of-53 for 337 yards with three touchdowns and no interceptions.

Any Patriots fan who caught wind of this tweet from @ProFootballDoc, Dr. David Chao, might have been a little panicked early in Saturday’s game.

Interesting.#TB12 with a little left knee varus thrust.
Previous ACL knee and wears brace.
Not sure it will change anything tonight. https://t.co/PQfInpwvhG

Brady put those fears to rest with short, accurate passes to drive the Patriots down the field all game. Brady also didn’t appear bothered by Achilles or left shoulder injuries that hampered him late in the regular season.

RB DION LEWIS
Lewis has been an absolute workhorse for the Patriots in recent weeks. He carried the ball 15 times for 62 yards and added nine catches on 10 targets for 79 yards.

Let’s give some credit to James White and Brandon Bolden, as well. White had 40 total yards on eight touches with two touchdowns. Bolden carried the ball four times for 27 yards with a touchdown.

WR DANNY AMENDOLA
Brady will probably win MVP this season, but it was clear at times during the regular season he missed Julian Edelman. Amendola did his best Edelman impression, catching 11 passes on 13 targets for 112 yards.

PATRIOTS OFFENSIVE LINE
Brady wasn’t sacked and was hit just four times by Titans pass rushers. It was tough sledding at times in the running game, but the Patriots still picked up 102 yards on the ground against a tough Titans run defense.

Defensive tackle Adam Butler provided pressure on Wise’s first sack and had a sack of his own.

The Patriots’ defense dominated in general Saturday night with eight sacks and two touchdown allowed, one of which came in garbage time. 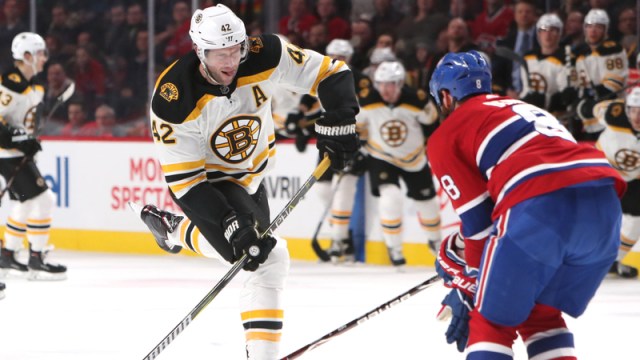