Zdeno Chara is 40 years old, but the Boston Bruins captain still is one of the NHL’s best defensive defensemen.

That was evident Tuesday night in Edmonton, where Chara shut down Oilers captain and the NHL’s reigning MVP in Connor McDavid in a 3-2 Bruins win at Rogers Place.

Despite not having the last line change as the road team, the Bruins were able to get their top defense pairing (Chara and Charlie McAvoy) and their best defensive line of Brad Marchand, David Pastrnak and reigning Frank J. Selke winner Patrice Bergeron on the ice as much as possible against McDavid.

Chara played 15:16 of McDavid’s 17:40 of even-strength ice time, and the Bruins held a 20-12 shot attempt advantage during that span. Boston had a plus-five edge in shots on goal during that same ice time.

The Bruins also owned a 12-4 lead in scoring chance and outscored Edmonton 1-0 during the 15-plus minutes of Chara on the ice against McDavid.

McDavid arguably is the best player in the NHL, and his 69 points in 58 games rank tied for third in the league in scoring. He entered Tuesday with seven points in just three career games versus the Bruins, but he was a complete non-factor because of Chara’s exceptional defensive performance.

Here are some other notes from Bruins vs. Oilers:

— The Bruins had lost six straight to the Oilers entering Tuesday. They also were 1-12-3 when trailing after two periods and 0-13-4 when trailing by two goals at any time this season.

Here’s another interesting stat between these teams:

The Oilers entered tonight's game against the Bruins 13-0-0 when leading after 2 periods.

— The Bruins put 43 shots on goal. It marked the eighth game this season in which Boston has tallied 40-plus shots on goal. They are 5-3-0 in those matchups.

— The acquisition of defenseman Nick Holden from the New York Rangers via trade on Tuesday gives the Bruins nine NHL-caliber defenseman. Although that might sound like too much, and maybe suggest another trade is needed, there’s really no pressing need for the B’s to make any other deals involving defenseman.

Remember when half of the Bruins’ blue line was injured in the first round of last season’s Stanley Cup playoffs? That lack of depth really hurt, especially when you factor all six games against the Ottawa Senators were decided by a single goal. The Bruins now have the needed depth on defense to withstand injuries in the playoffs, and the importance of that cannot be underestimated.

McAvoy’s ability to play a top-pairing role as a rookie also gives the Bruins the luxury of not having to overpay for a veteran blueliner before next week’s trade deadline. That said, if there’s a good deal to be made at the right price, the B’s should consider it, but what they have on the blue line right now should be good enough for a deep postseason run.

— The Bruins entered Tuesday well ahead of last season’s scoring pace through 57 games. Their goal differential is better by almost a full goal (0.9 per game), along with eight more wins and 10 fewer regulation losses. 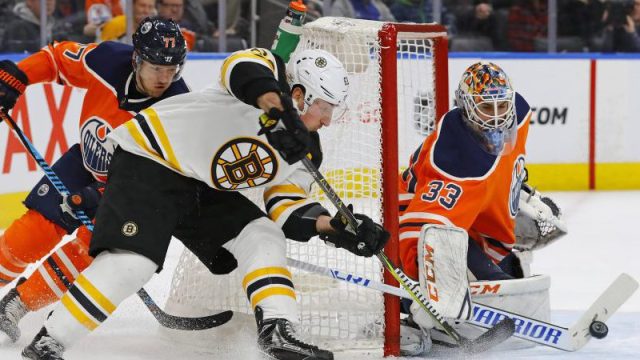