Gord Miller just said on TSN the return is believed to be a first-, second- and third-round pick.

3:08 p.m.: Erik Karlsson is staying put, but Ryan McDonagh is on the  move, and he’s headed to Tampa Bay, according to TSN’s Bob McKenzie.

McDonagh will be heading to TB from NYR, assuming it made the deadline. Pending trade call.

Tommy Wingels has been traded to Boston for a 5th round pick. #NHLTrade

3:04 p.m.: The new guys made a push for the biggest name available, but the Golden Knights couldn’t hit the jackpot.

VGK was the team in the hardest on Erik Karlsson in the final hour but did not get a deal done with OTT.

3:03 p.m.: The Bruins have been under the radar all day, but they look to be up to something.

Believe BOS and CHI are talking Tommy Wingels, if done in time

3:01 p.m.: The deadline has come and gone. Now we sit and wait to see if there were any buzzer-beaters.

Rangers pushing for a trade right up to the deadline, could still get something done per source.

2:44 p.m.: Check out the Washington Capitals jumping in and trying to make a splash before the buzzer. It sure sounds like there are opportunities for a blockbuster to happen before the deadline passes, but as Travis Yost points out, we’re running low on time.

The Washington Capitals have escalated effort in an attempt to land Erik Karlsson before the 3PM trade deadline, per league source. But running out of time.

2:36 p.m.: The Rangers have no shortage of options, if we’re to believe this report. Whether those are viable options, well, we’ll have to wait and see.

Told that five teams in the East have made good offers on Ryan McDonagh.

2:31 p.m.: We’ll also be keeping an eye on Thomas Vanek. It feels like he’s traded every year.

Source ; "Vanek heating up, I think he will be traded for sure. #Canucks

The @Capitals are one surprising team with heavy interest in Ryan McDonagh. They need to create some cap space to get it done. Not easy but………

2:19 p.m.: Here’s the reported cost for the Sharks to acquire Evander Kane.

the first also has conditoons on it

OFFICIAL: We have acquired Jason Chimera from the New York Islanders for Chris Wagner. #NHLTradeDeadline pic.twitter.com/1G1vjyVIGv

2:12 p.m.: Remember our update from literally a minute ago? lol … sounds like Evander Kane is heading West.

San Jose closing in on a deal for Evander Kane.

The Penguins are not in on McDonagh, I was just informed.

Per @RealKyper, PIT has inquired on Ryan McDonagh

Of course, the Penguins wouldn’t be alone with their interest in McDonagh.

The Leafs have also inquired on McDonagh in recent days. The asking price may simply be too high.

1:33 p.m.: As Frank Seravalli points out, there’s no shortage of rentals left on the market. These tend to be the sorts of players who aren’t dealt until the very last moment, the results of long staredowns. Basically, we’re all just playing the waiting game for now.

1:28 p.m.: Well, we’ve hit a momentary lull in the action. TSN is currently interviewing Tom “Bussey” Martin, who once was traded for a used bus.

1:10 p.m.: We’re under two hours to go, and things are getting a little more interesting.

Can confirm Interest from Anaheim and Florida on Canadiens' Captain Max Pacioretty.

12:42 p.m.: Still feels like it would be a pretty big surprise if Erik Karlsson is moved, but it’s not totally out of the picture yet.

12:17 p.m.: And here we go: The Blues reportedly just dealt Paul Stastny to the Winnipeg Jets. Again, the price was pretty high.

12:12 p.m.: The Preds certainly had to pay up to get Ryan Hartman from the Blackhawks.

12:06 p.m.: And there we go: Ryan Hartman has been traded to the Predators, according to TSN’s Pierre Le Brun.

Ryan Hartman has been traded to Nashville

So before noon in Nashville, the Predators have added not only Hartman, but they also officially announced Mike Fisher’s return. Not a bad day for the defending conference champions who trail only the Vegas Golden Knights in the Western Conference.

12:01 p.m.: As the clock ticks past noon on the East Coast, it seems things are starting to heat up a little bit.

Being told that @NYRangers Ryan McDonagh sweepstakes is down to 4 clubs. All in the Eastern Conference. Going to come down to if Jim Dolan has laid down the law that we do it right and build from the ground up! Sense management doesn't want to move him but….

11:59 a.m.: It now appears we know what was “brewing” between the Predators and Blackhawks. Sounds like Ryan Hartman will be heading to Music City, although there’s nothing official out there yet.

Ryan Hartman is the only Blackhawks player not at practice right now. Appears he's on the way out, likely to Nashville.

Working to confirm this Hartman/Nashville deal. It looks like he's gone, but it may not be done just yet. If it goes down, look for a top prospect or a lower prospect and a 1st.

11:56 a.m.: All’s quiet on the trading front, and it doesn’t sound like we’ll have any fireworks from the Senators today … although things can change.

From source close to Sens team, neither Karlsson or Ryan have received any word of a potential move as of now. Plan, barring change in next 3 hours & 10mins, is to jump on charter to Washington at 6pm.

Something brewing between #Preds and #Blackhawks

11:05 a.m.: The Bruins and Maple Leafs already have made moves, and more could be on the way, so you have to imagine the Lightning will do something at some point, too. How big their splash ends up being, however, is still far from determined.

Karlsson, McDonagh would be top choices for #TBLightning, but if price too high can see moving on to Green, Johnson. Faceoff man a need too

10:35 a.m.: There’s not much of anything going on at the moment, but we just wanted to let you know we haven’t forgotten about you and bringing you the latest.

And here’s the latest, as minor as it might seem at the moment.

9:43 a.m.: And we have our first trade of the day. Ottawa, according to multiple reports, is sending defenseman Ian Cole to the Columbus Blue Jackets.

Cole to CBJ for a 3rd and Moutrey.

With Cole heading to Columbus, the conversation already has started to shift to what the Blue Jackets do with Jack Johnson. There’s plenty of speculation about CBJ now shipping away the veteran D-man.

From Someone in the know on Karlsson: "No D-Day today…Less likely than more".#NHLTrade

That’s not entirely surprising, either. It’s rare a player with the talent of Karlsson who has term left on his deal is traded at the deadline. Having an actual physical deadline makes it much tougher to put together the sort of trade needed for a player like that. If the Senators want to trade Karlsson — who’s signed through next season — it always is possible they circle back in the offseason and look to trade when they don’t need to do it under the gun of the deadline.

Two-time defending Cup champion Penguins made a big deal for Brassard on Friday but may not necessarily be done. Absolutely open to making another addition if it fits.

Gotta imagine most teams are open to doing something before the deadline “if it fits,” but again, it’s been a slow day thus far.

8:15 a.m.: Let the sell-off continue for the Ottawa Senators. One year after coming oh-so-close to the Stanley Cup Final, the Sens are expected to be one of the biggest sellers at the deadline. First on the chopping block, it seems, is defenseman Ian Cole.

Among the potential Ottawa Senators on the move today, Ian Cole will likely go first. Winnipeg is among the teams with interest.

As for Erik Karlsson, TSN’s Darren Dreger also has the latest on that front, too.

Nothing materialized last night to advance likelihood of Karlsson getting traded. Market opens up in the summer. Remains a top story.

Hockey fans woke up Sunday to the news of the first blockbuster of the trade season, with the Boston Bruins acquiring Rick Nash from the New York Rangers. Shortly thereafter, the Bruins’ potential first-round playoff opponent — the Toronto Maple Leafs — acquired veteran forward Tomas Plekanec from the rival Montreal Canadiens.

But there’s still a workday’s worth of wheeling and dealing to be done leading up to Monday afternoon’s 3 p.m. ET deadline. The biggest name everyone will be talking about is Ottawa Senators defenseman Erik Karlsson. There has been no shortage of reported interest in the Norris Trophy winners, with the Tampa Bay Lightning and San Jose Sharks being two teams connected to the Sens in trade talks.

Karlsson isn’t the only top-flight D-man who could have a new address by the end of the day. New York Rangers blueliner Ryan McDonagh has been the subject of various trade rumors, and he might be the rebuilding Rangers’ most valuable asset.

There’s plenty of intrigue, and we’ll be on top of all the latest news and rumors throughout the day, so check back early and often. 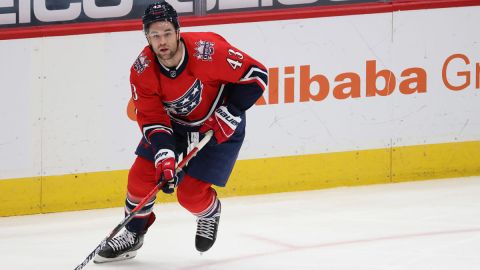