MINNEAPOLIS — For once, Tom Brady’s best was not enough.

Even the most productive game ever by a quarterback in a Super Bowl couldn’t mask Brady’s team’s glaring defensive deficiencies Sunday night as the New England Patriots fell to the Philadelphia Eagles 41-33 at U.S. Bank Stadium in Super Bowl LII.

Brady, who was honored as the NFL’s Most Valuable Player the night before the game, threw for a playoff record 505 yards and three touchdowns with no interceptions in a losing effort. All three of his touchdowns — two to tight end Rob Gronkowski and one to wide receiver Chris Hogan — came in the second half as the Patriots rallied from a 12-point deficit to take their first lead of the game with 9:22 remaining in the fourth quarter.

The lasting image of Brady’s historic performance, however, will be that of Eagles defensive end Brandon Graham knocking the ball from his hands two plays after Zach Ertz’s go-ahead touchdown for Philadelphia.

“I was just holding the ball trying to get it downfield,” said Brady, who’d led the Patriots into the end zone on each of their previous three drives and four of their last five. “Those guys had a good rush and got in there and made a good play.”

Derek Barnett recovered the fumble, and Philly forced New England to burn its timeouts on the ensuing possession, necessitating a Brady heave toward the end zone from midfield on the game’s final play. It fell incomplete, setting off a wild celebration as Philadelphia clinched its first Super Bowl title in franchise history.

The strip-sack was the first and only time the Eagles’ vaunted defensive line got to Brady, and it caused the Patriots’ lone turnover, excluding one on downs during the second quarter. It also was one of just two glaring miscues by Brady, the other being his drop on a Danny Amendola reverse pass.

Though they managed just 12 points in the first half, the Patriots moved the ball at will all night, setting one Super Bowl record with 613 total yards and another by going the entire game without punting. They’re the first team in NFL history — not Super Bowl history; NFL history — to rack up 600-plus yards and lose.

Most of that yardage came without No. 1 wide receiver Brandin Cooks, who sustained a concussion on a bone-crushing hit by safety Malcolm Jenkins during the second quarter and was removed from the game. Gronkowski, Hogan and Amendola all went over 100 receiving yards in the loss, with Amendola leading all pass-catchers with 152 yards on eight receptions.

Ultimately, though, the Patriots could not keep pace with the Eagles, who shredded a Patriots defense that stunningly played the entire night without starting cornerback Malcolm Butler (coach’s decision). With Butler watching from the sideline, Super Bowl MVP Nick Foles threw for 373 yards and three touchdowns, leading an Eagles offense that punted just once and scored on each of its final five possessions.

“You play to win, and sometimes you lose,” said Brady, who now is 5-3 in Super Bowls. “(I’m) disappointed. I wish we could have done a better job.” 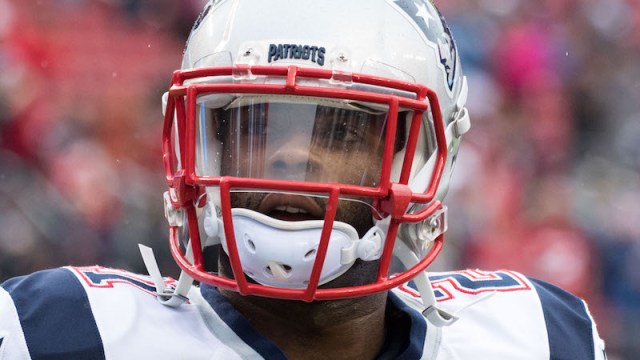