Jimmie Johnson soon will be without the only primary sponsor he’s ever had on the Monster Energy NASCAR Cup Series.

Lowe’s on Wednesday announced it will sever ties with the Hendrick Motorsports driver and leave NASCAR after this season, according to The Associated Press’ Jenna Fryer. The move will end a relationship that has produced 83 Cup race victories and a record-tying seven Cup championships.

“The No. 48 team is a valuable property and has been an integral part of building the Lowe’s brand, which makes today’s decision difficult as we now look to invest in other strategic initiatives,” Lowe’s chief customer officer Michael P. McDermott said in a statement through Hendrick Motorsports. “Although we are evolving our strategy, there’s no question that being a part of seven championships and many history-making moments has been valuable for Lowe’s.”

Lowe’s eventual departure will mark the first time Johnson has shopped for sponsors since signing with Hendrick and making his Cup debut in 2001. And while HMS no doubt is disappointed with the news, it’s nevertheless optimistic about searching for the No. 48’s new sponsor.

“Jimmie is one of the greatest champions and ambassadors in all of sports and still at the top of his game,” team owner Rick Hendrick said. “This change opens up all kinds of possibilities, and we look forward to having conversations with potential new partners. It’s a special opportunity with an iconic athlete and team.”

But don’t worry, NASCAR fans, Johnson has no plans to retire.

“I have more to accomplish in this sport,” Johnson said in a statement. “I feel the best I’ve ever felt physically. I’m motivated. I’m focused on winning races and chasing more championships. Someone (a new sponsor) will be a big part of writing that story with us. I’m not going anywhere.”

The 42-year-old Johnson is signed with Hendrick through 2020. 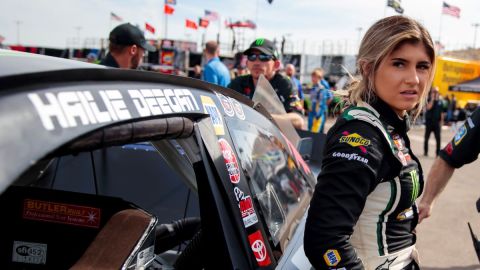