Besides going to the Super Bowl almost every year, there are some advantages to covering a football team that has had the same power structure in place for nearly 20 seasons.

We identified 10 potential first-round picks for the Patriots based on this year’s combine results.

He also played lacrosse in high school and almost played the sport at Notre Dame before ultimately opting to play football under Bill Belichick’s buddy, Urban Meyer, at Ohio State.

DT HARRISON PHILLIPS, STANFORD
Phillips also has the potential to be a three-down defensive lineman, though he’s not as good of a pass rusher as Bryan.

He led Stanford in tackles as a senior, which is insane for a nose tackle. He had 14.5 sacks over his last two years.

Vander Esch was strong as a run defender and in coverage, and he had 16 total pressures on just 96 pass-rush snaps in 2017,

CB JAIRE ALEXANDER, LOUISVILLE
Alexander might be gone by the time the Patriots pick at 31st overall, and while he doesn’t have elite size, his athleticism stacks up with that of Patriots cornerback Stephon Gilmore. He ran a 4.38-second 40-yard dash with a 6.71-second three-cone and 3.98-second short shuttle.

FS JUSTIN REID, STANFORD
Reid hit every mark among the Patriots’ standards. He also impressed with his smarts in combine media interviews. He can play both safety spots and slot cornerback.

WR D.J. MOORE, MARYLAND
Taking a wide receiver in the first round seems unlikely, but the Patriots could elect to plan for the future. Brandin Cooks and Chris Hogan both are scheduled to hit free agency in 2019.

Moore fits the Patriots’ typical standards in every category other than hand size. He’s clearly an elite athlete, and he caught 80 passes for 1,033 yards with eight touchdowns in 2017.

OT KOLTON MILLER, UCLA
Miller’s projected round varies from site to site, but we could see him rising in draft rankings after his combine workout.

Miller left UCLA after his junior season and fits the Patriots’ standards with his size, speed, strength, explosion and agility.

QB KYLE LAULETTA, RICHMOND
So, this one’s a bit of a stretch, because Lauletta currently is ranked as a third-round prospect. But Mason Rudolph and Lamar Jackson didn’t do enough at the combine to determine if they’re fits, and Josh Allen likely won’t be available at No. 31 overall. If the Patriots take a QB in the first round, Lauletta is the best fit. 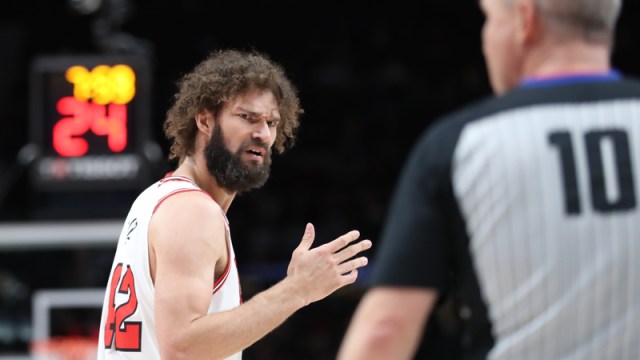