Veteran defensive tackle Ricky Jean Francois, who will become an unrestricted free agent March 15, announced through his public relations agency that he’s moving on from the Patriots.

“I plan on continuing to play at the highest level,” the statement said. “Hopefully I made a strong case for myself this past season. I did absolutely everything I could to help the Patriots during my short time there, and I learned that playbook immediately. It takes a special type of player and discipline to do that so quickly. My priority right now is to find a stable home where I can step in and make a similar impact for a few more seasons before I ride off into the sunset. …

“I’d like to thank Robert Kraft, Coach Belichick, Coach Patricia and the Patriots front office for allowing me to be a part of something that not a lot of players get the opportunity to do — play for the New England Patriots. Playing in Foxboro made me appreciate this game a lot more. Thank you to everyone there for giving me a great experience that I’ll remember for the rest of my life.”

Jean Francois originally signed with the Patriots on Nov. 7. He was released Dec. 2 and re-signed Dec. 13. By the postseason, Jean Francois leapfrogged Alan Branch on the Patriots’ defensive tackle depth chart.

He had 10 tackles in six regular-season games. He added six tackles and a sack in three playoff performances.

Jean Francois entered the NFL in 2009 as a seventh-round draft pick out of LSU with the San Francisco 49ers. He also has spent time with the Indianapolis Colts, Washington Redskins and Green Bay Packers.

Jean Francois’ announcement is reminiscent of when former Patriots defensive end Chris Long’s decided last offseason to move on before signing with the Philadelphia Eagles. 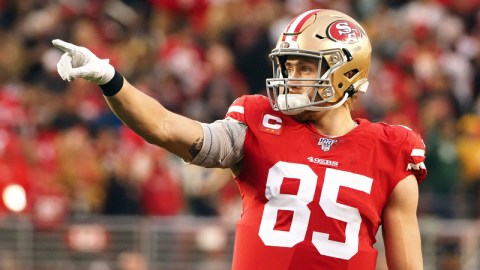 Bill Belichick Raves About George Kittle: Niners Tight End ‘As Good As Anybody’