We could tell you about how Opening Day is approaching, which means a fresh beginning and equal footing for every team across Major League Baseball.

But we’ll spare you all that crack of the bat, smell of the grass crap.

Baseball is back. And that’s awesome. But the reality is there are several clubs that look like legitimate World Series contenders, while there are others that have no chance of making the postseason in 2018 … or so you think.

There are surprising developments nearly every season, and a deeper dive suggests there are a few teams worth paying more attention to as the season nears. Call them “sleepers” or “dark horses” or whatever you want, but these six clubs could be much better than expected in 2018.

Atlanta Braves
The Washington Nationals ran away with the National League East in 2017, but their path to the postseason should be much more difficult moving forward. While the Braves might not truly contend until 2019 or 2020, their prospect pipeline is littered with potentially game-changing players, who, if correctly handled, could contribute right away in 2018.

The Braves have eight players on MLB.com’s Top 100 Prospects list, headlined by outfielder Ronald Acuna (No. 2), whose ceiling is as high as anyone’s. The 20-year-old will start the season in Triple-A — for service time reasons, even if the team won’t admit it — but he’ll be promoted very soon, at which point he could make an immediate impact before eventually evolving into one of the best players in baseball. He’s that good.

Even without Acuna, the Braves could be sneaky decent, in large because they’re strong up the middle. Second baseman Ozzie Albies looks like a stud, and shortstop Dansby Swanson (former No. 1 overall pick), despite initial growing pains, has some valuable experience under his belt. Center fielder Ender Inciarte, meanwhile, has won a Gold Glove two years in a row. And we haven’t even mentioned first baseman Freddie Freeman, who is Atlanta’s best hitter and a perennial All-Star candidate.

Chicago White Sox
Speaking of stacked farm systems, the White Sox have seven players on MLB.com’s Top 100 Prospects list after making several trades geared toward aiding their rebuilding process. It’s unclear how many of those guys will thrive in 2018, but the list doesn’t include up-and-coming hurlers Lucas Giolito, Reynaldo Lopez or Carson Fulmer, all of whom gained valuable big league experience in 2018.

Offensively, this could be Yoan Moncada’s breakout season at second base. Same for his double-play partner, Tim Anderson, who has some swing-and-miss to his game but still plenty of speed and upside in the batter’s box. Oh yeah, and slugger Jose Abreu can mash. But you already knew that.

Cincinnati Reds
The Reds have finished in last place three years in a row and haven’t had a winning season since 2013. Hopefully that changes this season, for Joey Votto’s sake. He’s one of the best hitters of this generation and deserves another crack at the big stage.

It probably won’t come this season, thanks to playing in a deep NL Central. But don’t completely write off Cincinnati, which boasts a solid lineup and a rotation that could be far better in 2018 if Luis Castillo becomes an ace, Brandon Finnegan’s injury isn’t too serious and Anthony DeSclafani (missed all of 2017) returns without a hitch in May or June.

Homer Bailey, who turns 32 in May, also represents a wild card in the rotation given the success he had before injuries threw his 2015, 2016 and 2017 seasons into a tailspin. Raisel Iglesias is one of the most underrated closers in baseball, and Nick Senzel (No. 2 overall pick in 2016) could give the Reds another impact bat soon enough.

Oakland Athletics
There are sexier teams in the American League West, which is where the defending World Series champion Houston Astros reside. But the A’s tied for the major league lead in home runs (109) after the All-Star break last season thanks to the emergence of Matt Chapman and Matt Olson alongside slugger Khris Davis. Given that homers and launch angle are all the rage, the A’s seem well-equipped to thrive in today’s MLB. The additions of Jonathan Lucroy and Stephen Piscotty should help, too.

The question is whether Oakland’s pitching will be good enough. The A’s have some upside in their rotation with Kendall Graveman and Sean Manaea — prospect A.J. Puk is coming fast — and their bullpen actually might be a strength after an offseason facelift.

Philadelphia Phillies
Remember when we said the Nationals’ path to the playoffs will be more difficult? Well, here’s another reason why.

Santana joins a lineup that saw the emergence of Rhys Hoskins and Nick Williams in 2017. With Jorge Alfaro at catcher, Odubel Herrera in center field, J.P Crawford at shortstop and either Cesar Hernandez or Scott Kingery at second base, the Phillies could be very strong up the middle in addition to having the aforementioned sluggers, as well as powerful third baseman Maikel Franco.

Arrieta will form a nice 1-2 punch with Aaron Nola, and don’t sleep on Philadelphia’s bullpen after the addition of Neshek. Closer Hector Neris has shown flashes of brilliance in his short career.

San Diego Padres
The Padres threw their young players into the deep end last season. As a team, they sank, losing 91 games. But the experience could help in the future, when those players start to reach their full potential, and signing Eric Hosmer indicates San Diego is looking to win sooner than most expected.

Manuel Margot, Austin Hedges, Hunter Renfroe and Jose Pirela are among the players with offensive upside, while Luis Perdomo and Dinelson Lamet (when healthy) are a couple of intriguing pitchers who could take the next step in 2018. 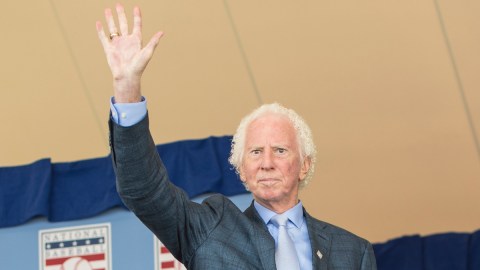