UPDATE (7:20 p.m.): Jaylen Brown has been downgraded to out for Game 1, the Celtics announced.

ORIGINAL STORY: BOSTON — The chances of seeing one of the Boston Celtics’ best performers this postseason is getting increasingly grim as the clock ticks closer to tip-off for Game 1 of the C’s second-round NBA playoff matchup against the Philadelphia 76ers.

Prior to Monday’s game, Celtics head coach Brad Stevens gave an update on the guard, who missed the entirety of the second half of Saturday’s first-round Game 7 against the Milwaukee Bucks after tweaking his hamstring.

While Brown is doing everything he can to play, Stevens didn’t sound encouraged and has a contingency plan in place.

“He’s on the phone right now with our team (doctor) and with our trainers, and they’re all talking about it,” Stevens said. “He really wants to play, (but) I would say very doubtful. If he doesn’t play then we will start Marcus Smart.

“He went through stuff this morning, although they cut him short from going through the whole workout. He feels a lot better, he’s anxious to play, so I think that’s part of the discussion, but I think obviously if there’s any more tests or discussion of the possibility then he’ll go out and do whatever he needs to do on the court for them to feel comfortable.”

Brown has been a pretty big reason the Celtics even moved on this postseason. He averaged 17.9 points on 46.7 percent shooting against the Bucks, also grabbing 4.7 boards per game. And given he was averaging just shy of 35 minutes per contest this postseason, not only does his production have to be made up for, but also his time on the floor.

Whatever the case ends up being, here is the Celtics’ starting lineup for Game 1: 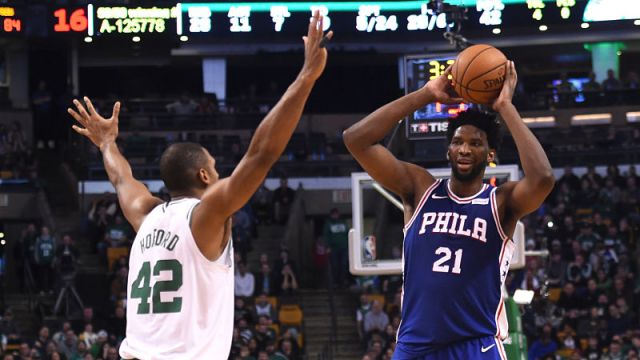