Drew Pomeranz’s return to the hill had its bumps.

After missing nearly all of spring training and the start of the regular season due to a left forearm flexor strain, the Boston Red Sox lefty made his much-anticipated 2018 debut in Friday night’s 7-3 win over the Oakland Athletics.

The start featured a little bit of everything, from chaos to dominance, all in just 3 2/3 innings of work. Pomeranz allowed three runs — all earned and in the first inning — on five hits, with two walks and seven strikeouts.

Pomeranz threw 88 pitches, with 45 coming in the first frame. In that fateful first, the southpaw allowed a walk to the game’s second batter, Stephen Piscotty, who was driven in a hitter later on a Jed Lowrie double.

With one out, Pomeranz struck out Khris Davis and Matt Chapman, however on the latter the ball got past Christian Vazquez and rolled to the backstop, allowing Chapman to reach first and keep the inning alive. With the inning extended and runners on the corners, Matt Olson and Mark Canha made Boston pay with back-to-back RBI singles to make it 3-0. Despite a foul ball from Chad Pinder the next at-bat nearly staying fair for a three-run home run (which warranted a review to confirm), Pomeranz fanned the left fielder.

From there, Pomeranz appeared to settle in. He allowed just two more hits and one more walk the rest of his outing, even striking out the side in order in the third inning.

Though it lacked in command at times, Pomeranz’s breaking ball bit sharply and did a fine job of fooling hitters. His four-seam fastball, however, was the slowest it has been of any outing of his career, averaging 88 mph.

It’s going to take time for Pomeranz to work out some kinks as he gets back to being a regular part of the rotation. And while there were some concerning at-bats Friday night, there also were plenty of promising ones.

— After struggling mightily to hit for power in 2017, the narrative so far this campaign has been quite the contrary. The Red Sox keep mashing home runs, with their source of runs Friday exclusively coming from dingers.

Jackie Bradley Jr. smacked a game-tying three-run homer in the second inning that sailed 436 feet, while Mitch Moreland hit a go-ahead grand slam in the sixth.

Moreland has homered in each of his last four games in Oakland.

Boston now has 26 home runs on the season, five of which being grand slams. The club record for grand slams is 11, set by the 2005 team, and the current group is well on their way to possibly shattering that marker.

— The loss of Xander Bogaerts was a big one for the Red Sox, but Brock Holt and Tzu-Wei Lin have stepped up in his absence. Holt has logged most of the time at shortstop, and of late has provided some quality at-bats to go with serviceable defense.

With a hit Friday, Holt extended his current hitting streak to five games. Of those five games, three were multi-hit, with the utility man posting a .380 batting average in those games.

— Matt Barnes on Friday made his first appearance since Sunday, and he came up big in an important role.

The righty entered in the seventh trying to preserve a 7-3 lead with the bases loaded and two outs. Oakland pinch-hit Matt Joyce, who was 1-for-3 with a home run in his career against Barnes entering the at-bat. The reliever dialed in, however, and threw a seven-pitch strikeout, getting Joyce to swing and miss on a full-count fastball. 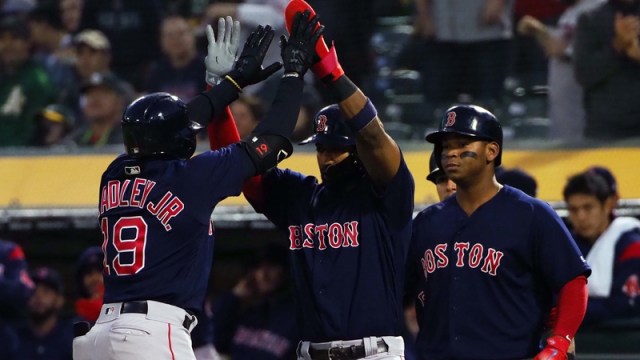 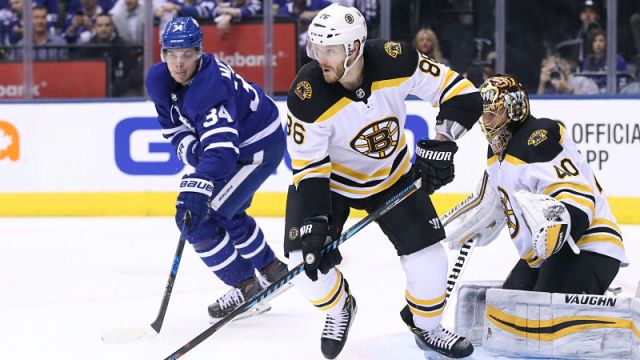