The Boston Red Sox will head back to Fenway Park after posting a 6-3 record on their road trip, which culminated with two straight wins over the Toronto Blue Jays.

Boston came away with a 5-4 victory over Toronto after falling behind 3-0 early in the game at Rogers Centre.

After falling behind after three innings, the Sox chipped away at Toronto’s lead, and even though the Jays were down by one in the ninth, Boston held on to secure the victory.

ON THE BUMP
— Chris Sale tossed 104 pitches over six innings of work, retiring 10 of the last 11 batters he faced.

The hard-throwing lefty gave up a run in the first, second and third innings, two of them being solo home runs. It looked as if he was going to come out in the sixth with two outs when Sox skipper Alex Cora visited the mound, but after a brief exchange Sale ended up throwing one more pitch and got the final out of the inning.

He ended his day with the win, giving up four hits and two walks while striking out four.

— Carson Smith made his 100th-career appearance in relief of Sale in the seventh.

The right-hander gave up a triple to Jays second baseman Devon Travis before he scored on a ground out to bring Toronto within one. Cora took Smith out of the game after he gave up a double to left fielder Teoscar Hernandez.

— Matt Barnes took over for Smith in the seventh with two outs and Hernandez on second and was able to end the Blue Jays’ threat to score when he got Justin Smoak to strikeout swinging.

Barnes got himself into a bit of jam in the eighth with two on and one out, but ended the inning with a huge strikeout of Luke Maile.

— Craig Kimbrel came in for the ninth and closed out the game by retiring the side in order.

IN THE BATTER’S BOX
— Boston shortstop Brock Holt quickly got himself into scoring position when he doubled in the third, but was replaced by Tzu-Wei Lin after he left the game with left hamstring tightness.

After striking out in the first, Andrew Benintendi roped a double to score Lin and cut the Red Sox’s deficit in half. Hanley Ramirez drew a walk to put two on with two out, but Benintendi was picked off at second to end the threat.

— Another solo home run off the bat of Justin Smoak for Toronto put the home team back up by two, but Boston answered back in the fourth with an RBI sacrifice fly from Rafael Devers.

— With two on and two outs in the fifth, Martinez smacked an opposite-field home run to give the Sox a 5-3 lead.

TWEET OF THE NIGHT
Barnes had a little bit of everything tonight.

UP NEXT
The Red Sox will return home to Fenway Park on Friday to host the Tampa Bay Rays for a three-game set. Drew Pomeranz is scheduled to oppose Blake Snell on the mound with first pitch slated for 7:10 p.m. 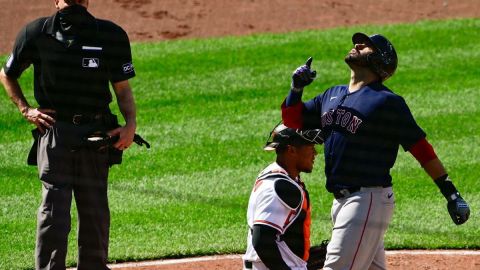