How does a running back average almost 8 yards per carry while facing a schedule chock full of SEC defenses? Sony Michel answered that question in 2017.

The Georgia running back, who was drafted by the Patriots 31st overall in the 2018 NFL Draft, carried the ball 156 times for 1,227 yards with 16 touchdowns last season while sharing time in the backfield with Nick Chubb, whom the Cleveland Browns selected four picks after Michel.

Oh, and big plays are the answer.

Michel had 22 carries of 15 yards or more last season, according to Pro Football Focus. Those big plays accounted for 55 percent (675 yards) of Michel’s 2017 production. He had the highest percentage of carries (14.1 percent) to gain 15 or more yards.

What’s perhaps most impressive about those stats is Michel still averaged 4.1 yards per carry on the 134 carries that didn’t go for 15 yards or more.

In reviewing Michel’s film, it became apparent the running back was able to create so many big plays through a combination of power, fluidity, speed, vision and one-cut ability. Though Michel had a good offensive line — the Patriots drafted his left tackle, Isaiah Wynn, 23rd overall — they weren’t all easy yards generated by big holes.

Michel is 5-foot-11, 214 pounds and has the ability churn his legs through contact to keep moving. His acceleration stands out as he’s able to regenerate his speed after cutting and absorbing a hit.

Michel doesn’t go down easy on arm tackles, and he embraces and initiates contact at the end of his runs.

The guy was simply a big-play machine as a senior in college.

And while I’m usually not a big proponent of taking running backs in the first round, I’ve talked myself into the Michel pick for two major reasons.

One, there was a run of running backs between the Patriots’ 23rd overall pick and their next selection, No. 43, in which Rashard Penny went to the Seattle Seahawks, the Patriots took Michel, the Browns grabbed Nick Chubb, the Tampa Bay Buccaneers picked Ronald Jones and the Detroit Lions drafted Kerryon Johnson. The Patriots couldn’t have taken a player of Michel’s caliber later in the draft.

Two, the Patriots might miss Brandin Cooks’ big-play potential in 2018, and Michel could provide similar chunk plays thanks to his home-run ability. Here’s another long run.

This big play against Oklahoma is the definition of a one-cutter.

Michel *only* ran a 4.54-second 40-yard dash, but he has enough speed to finish long runs for touchdowns.

It’s possible he gets caught more often in the NFL.

He’s also got a little bit of LeGarrette Blount in him. Watch him carry a hoard of Vanderbilt defenders.

Michel finishes runs hard and typically falls forward, which is an easy way to pick up extra yardage.

He uses speed and power more than pure shiftiness, but he does have the ability to break an ankle or two.

Some bad came with the good, however. Watch these two plays back to back.

This is one one of my favorite plays of Michel’s 2017 season. He rag-dolls the Oklahoma linebacker coming out of the backfield, then makes a play on the scramble drill and shows off his ability to pick up yards after the catch.

He caught 78.8 percent of his career targets, and while he probably won’t be a prolific pass-catcher in the mold of James White, he’s also not one-dimensional. When he’s on the field, opposing defenses will have to respect the run and catch.

As long as his game translates to the pros, Michel will be fun to watch in a Patriots uniform. He has an exciting blend of speed, power, shiftiness and ability to contribute in the passing game.

While he might not have Dion Lewis’ ability to make a play in a phone booth, he’s a much bigger threat to rip off a 50-yard run for a touchdown. 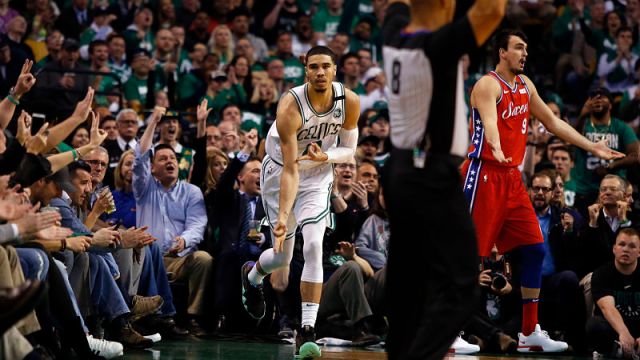 Jayson Tatum Proves He Won’t Be ‘The Other Rookie’ In Series Vs. 76ers

Which Red Sox Player Holds Team Record For Most Grand Slams In A Season?