Why Patriots Fans Should Be Excited About NFL's New Kickoff Rules - NESN.com Skip to content

Big changes are coming to NFL kickoffs this season.

The league’s owners on Tuesday approved a set of drastic new kickoff rules, which were proposed by a committee that included several active special teams coaches.

Following today?s vote at the @NFL Spring League Meetings, here?s everything you need to know about the new kickoff rules for the upcoming 2018 season. The rule will be reevaluated next offseason. pic.twitter.com/YubLyMBR4g

Here?s a summary of all the changes to the @NFL kickoff rule for 2018 ? see how they compare to the previous rule. pic.twitter.com/4R4aK5sZwK

The NFL has made several attempts in recent years to make kickoffs safer, and these new rules are a continuation of that trend. But unlike some of the previous tweaks — like moving the kickoff from the 30-yard line to the 35, which the league did in 2016 — these ones will benefit the returning team, not the kicking team.

Banning the running start for kick coverage players and creating a more punt-like atmosphere will open up more space for talented return men to operate in, potentially increasing the number and effectiveness of kick returns. (Just five teams surpassed 1,000 kick return yards last season, compared to 15 in 2013 and 30 in 2010.)

One team that stands to benefit from these changes: the New England Patriots

Though they couldn’t have known these changes were coming at the time, the Patriots now look smart for swapping late-round draft picks with the Oakland Raiders earlier this spring to acquire wide receiver Cordarrelle Patterson.

Patterson never has been a totally reliable offensive player during his NFL career — which certainly could change now that he’s working with Josh McDaniels and Tom Brady — but he’s one of the NFL’s premier kick returners, earning first-team All-Pro honors in two of his five pro seasons and a second-team nod in another.

The league’s continued de-emphasis on kickoffs has limited Patterson’s value in that regard in recent years — he returned a career-low 19 kicks for the Raiders last season, way down from his 2013 total of 43 — but he’s built to thrive under the new format.

Patterson still needs to earn a spot on the 53-man roster, which is no guarantee given New England’s wealth of wideout talent. But it’s easy to see him exploiting these rule changes to his — and the Patriots’ — benefit. 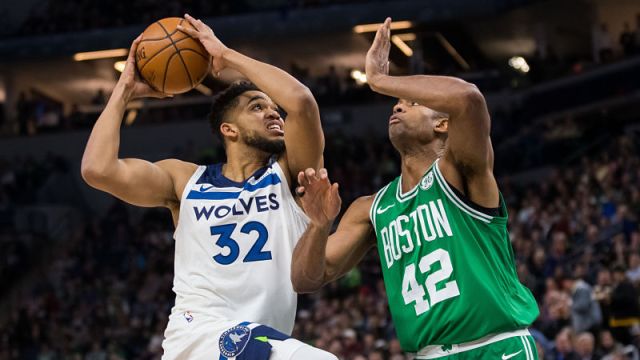 Should Celtics Consider This Hypothetical Trade For Karl-Anthony Towns?