The Philadelphia Eagles were set to visit the White House on Tuesday to celebrate their Super Bowl LII championship, but their invitation since has been rescinded.

Due to the fact that some members of the Eagles were electing not to attend the White House, President Donald Trump revoked the invitation Monday, citing the national anthem protest as the reason some Eagles were not going to attend.

Donald Trump issues a statement saying neither the #Eagles, nor team representatives, are welcome at the White House tomorrow for their Super Bowl visit. Unreal. pic.twitter.com/PXEoZ43XY0

This is the second time Trump has rescinded an invitation to a championship-winning team. He previously “revoked” the Golden State Warriors’ invite after they already had declined to attend, which is akin to uninviting someone after they say they won’t attend come to your party in high school.

Eagles owner Jeff Lurie made the choice to send a smaller group, according to NFL Media’s Mike Garafolo, in order to not put some players in a precarious position.

The Eagles held meetings with their players in recent weeks and, according to sources, Jeff Lurie didn't want to put the players in a tough spot so he decided to send a smaller contingent. Other players were going to have an optional day at the facility. Now, no trip to D.C.

So many lies smh
Here are some facts
1. Not many people were going to go
2. No one refused to go simply because Trump ?insists? folks stand for the anthem
3. The President continues to spread the false narrative that players are anti military pic.twitter.com/89GUNhJ4eE

But back to Trump’s statement.

First of all, it’s cowardly and manipulative for the supposed leader of the free world to care so much about whether or not players disagree with his position on a number of topics, which is their right as American citizens. Secondly, it’s worth noting that the back half of that statement reads like something out of a C-rate 1940s propaganda film. Finally, Trump’s tantrum just goes to show how ridiculous it was that NFL owners believed he would lighten up on them if they capitulated to him over the national anthem issue.

It’s also worth noting that many athletes elected not to visit the White House when Barack Obama was president and the response was not to uninvite the whole team.

Official statements from the President used to be serious thoughtful expressions of national interest. Now they are childish rants. The latest?if some of the SB champs don?t want to come to the WH, then none of them are invited. POTUS will play with his toys alone tomorrow 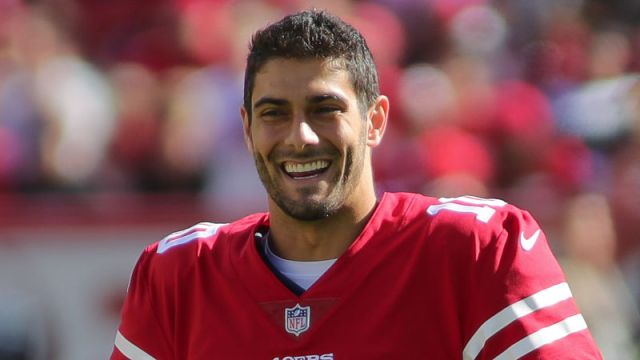 Why Terrell Owens Believes He Can Be An Asset To Jimmy Garoppolo, 49ers