The Boston Red Sox are wasting no time getting Steve Pearce into the mix.

Boston acquired Pearce in a trade with the Toronto Blue Jays late Thursday night, and Friday, the veteran utility man will make his Red Sox debut when the team opens a three-game series against the New York Yankees at Yankee Stadium.

Pearce will get the nod at first base in place of Mitch Moreland, who started 32 of Boston’s last 33 games. Pearce will bat cleanup for the Sox in the series opener, two spots ahead of Eduardo Nunez, who returns to play second base after sitting out Thursday’s series finale against the Los Angeles Angels.

It will be a battle of southpaws on the hill, as Eduardo Rodriguez gets the ball for Boston opposite CC Sabathia. Rodriguez was solid in his only start against the Bronx Bombers this season, tossing five shutout innings in which he only allowed one hit. Sabathia struggled in his lone outing against the Red Sox, allowing four runs on nine hits over just four innings.

Here are the full lineups for Friday’s Red Sox-Yankees game: 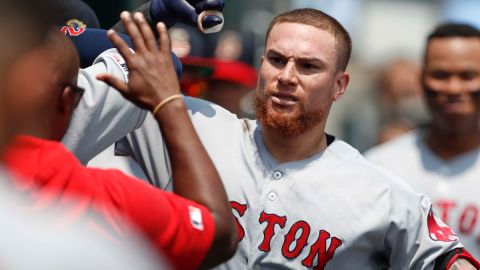