Live look at the world champions moments after the final whistle: pic.twitter.com/2rNke8mdRh

Les Bleus are on top of the world for the second time in their history after seeing off Croatia in this epic World Cup final.

Croatia’s Mario Mandzukic started the scoring with a first-half own goal and ended it in the second half by pouncing on Hugo Lloris’ goalkeeping blunder. Ivan Perisic, Antoine Griezmann, Paul Pogba and Kylian Mbappe took their respective places in soccer lore by scoring goals in between Mandzukic’s strikes.

Croatia imposed itself on France for large swaths of the game, but Les Bleus executed in pivotal — set pieces, VAR-awarded penalty kicks and intermittent goal-scoring chances in the second half — far better than the Blazers did. In doing so, France and Croatia treated the soccer world to a final it won’t soon forget.

Only one stat matters…

France returns to soccer’s summit for the first time in 20 years. Head coach Didier Deschamps won with the second-youngest team in the tournament, joining the ranks of soccer’s most celebrated statesmen.

?? Didier Deschamps is the third man to win the World Cup as both a player and a head coach, and the second to captain and coach a team to the title (Beckenbauer).

Man of the match: Antoine Griezmann earns MOTM honors and becomes a national hero, not only because of his goal celebration but also for his enduring importance to France’s cause.

Next up: We might have just witnessed the dawn of world champion France’s dynasty. Croatia will return home with silver medals, having boosted the pride of its nation.

89th minute, 4-2 France: There will be five minutes of stoppage time in the second half.

87th minute, 4-2 France: Nabil Fekir launches a shot on goal from outside Croatia’s penalty area, but it flies straight to goalkeeper Danijel Subasic.

History has a way of repeating itself

In 1998, when France won the FIFA World Cup, their no. 9 Stephane Guivarch didn't score a single goal.

Fast forward to 2018, France are about to win it and no. 9 Giroud didn't even have a shot on target in 7 matches. Still gets a gold medal

75th minute 4-2 France: Croatia remains on the hunt for another goal, sending a flurry of crosses into France’s penalty area. France’s back line has dealt cleared each effort, but Croatia still is showing menace.

Samuel Umtiti played an innocent-looking ball back to Lloris, who seemingly forgot why he plays goalkeeper instead of one of the outfield positions.

Oh no Hugo Lloris, what is you doing? ? pic.twitter.com/ui8g6ZOiPp

Teenagers to score in a #WorldCupFinal

Kylian Mbappé gets in on the action!

The 19-year-old becomes the first teenager to score in a FIFA World Cup final since Pelé. pic.twitter.com/4fqjCSWJL0

There’s good reason Mbappe and Pele are being spoken of in the same sentence.

Kylian Mbappé (19) #FRA is the second teenager to score in a #WorldCupFinal after Pelé (17) for Brazil in 1958.#FRACRO

The current situation plays to France’s strengths, as Croatia will commit players forward with increasing desperation, allowing Kylian Mbappe and Antoine Griezmann to operate in space on the counter-attack.

The France midfielder recovered his own blocked shot and curled his subsequent effort around Croatia midfielder Luka Modric and past goalkeeper Danijel Subasic.

#FRA Paul Pogba becomes the first player to score from outside the box in a #WorldCupFinal since Italy's Marco Tardelli in 1982.#FRACRO

Kante was carrying a yellow card. Nevertheless, he’s a contender for the World Cup 2018 Golden Ball award, which will go to the tournament’s best player.

53rd minute, 2-1 France: Fans have run onto the field, temporarily bringing a halt to the action.

49th minute, 2-1 France: Croatia is applying all the pressure early in the second half and has pinned back France deep in its defensive third.

48th minute, 2-1 France: Croatia’s Ante Rebic runs onto a through ball and shoots on goal, but France goalkeeper Hugo Lloris tips his shot over the crossbar.

46th minute, 2-1 France: The second half of the France vs. Croatia 2018 World Cup final is underway.

History favors France at the interval.

Six of the seven teams to lead a #WorldCupFinal at half went on to win the title.

Halftime, 2-1 France: That’s the end of the first half. France leads Croatia by one.

Croatia is determined to be the protagonist in the 2018 World Cup final, for better or worse. Mario Mandzukic’s own goal gave France the lead after 18 minutes. Croatia’s Ivan Perisic restored parity in the 28th minute. The final major twist of the half came 10 minutes later when Antoine Griezmann converted a VAR-awarded penalty kick on France’s first shot of the game. Despite outplaying France in many facets of the game, Croatia trails due to these major events that curiously struck 10 minutes apart from one another.

As we’ve seen all tournament long, set pieces, own goals and technology have played a major role in games. They have added drama and tension to fill the void the absence of beautiful, flowing soccer has created.

Expect Croatia to continue playing more assertively than France, which will try to counter-attack into growing spaces in the Croatian back line and capitalize on set-pieces or mistakes.

45th minute, 2-1 France: There will be three minutes of injury time in the first half.

45th minute, 2-1 France: Samuel Umtiti, one of France’s center backs, is down with an apparent leg injury. A Croatia player fell on him during a tangle over a corner kick.

38th minute, 2-1 France: Antoine Griezmann converts the penalty kick, and France is back in front.

The first penalty in regular time of a #WorldCupFinal since Zinedine Zidane in 2006! #FRACRO // #WorldCup pic.twitter.com/fG0CJK10TJ

Calm, cool and collected from Griezmann! ?

The Frenchman slots home the penalty to put France back up 2-1. pic.twitter.com/13AAg5GI34

France has two goals despite doing little attacking in the first half.

1 – Antoine Griezmann's penalty (37:56) was France's first shot of any kind in this match against Croatia. Wait.#WorldCupFinal #WorldCup #FRA #CRO pic.twitter.com/gOBYOMJYXQ

Griezmann #FRA (4 goals, 2 assists) joins Harry Kane #ENG (6 goals) as players to be directly involved in most goals at the #WorldCup2018 #FRACRO

36th minute, 1-1: After consulting VAR the referee has awarded France a penalty kick.

His shot takes a slight deflection past Lloris to make it 1-1. pic.twitter.com/D2eayynKUN

Nine of the 10 last WC Finals have been won by the team to score the opening goal. The exception: #FRA penalty loss vs ITA in 2006.

Then again, Croatia conceded the first goal in the Round of 16, quarterfinals, and semifinals before coming back to tie, then ultimately win, each game.

France’s goal came against the run of play after Griezmann won a free kick in a dangerous position. Croatia seemed to have the free kick covered, but Mandzukic didn’t jump high enough to head it clear.

Mandzukic heads it into his own net to give France the 1-0 lead. pic.twitter.com/LxNebIaASA

Mandzukic was Croatia’s hero in the semifinals, but this mistake puts him in a party of one.

Ninth minute, 0-0: Croatia has been crossing the ball into France’s penalty area with increasing frequency. French defenders have dealt with the danger in each instance, but Croatia’s attacking strategy is clear.

Attacking-third touches in the first 10 minutes…

Fourth minute, 0-0: The game has started slowly, with neither team seizing control of proceedings early on. Croatia has had more possession, but its short passing hasn’t produced any threatening moments so far.

France has shown throughout the World Cup it is comfortable, perhaps even prefers, counter-attacking. Croatia must be wary of pushing too many players forward, allowing space or France to exploit.

It’s hot and humid in Moscow. Let’s see how the players cope with the conditions as the game unfolds. We’re expecting France to be the fresher side as it has the benefit of an extra day of rest. All three of Croatia’s knockout-round games went to extra time, meaning its players have played 90 more minutes — effectively an additional game — than France’s since June 30.

Pregame: The teams are on the field for the national anthems. Kickoff is just a few minutes away.

As is the case with most soccer games, the France vs. Croatia game likely will be decided in the midfield, and the matchups in the center are fascinating. France is reaping rewards from Paul Pogba’s partnership with N’Golo Kante.

Meanwhile, Croatia’s Ivan Rakitic and Luka Modric have proven themselves with their clubs to be masters of finals. Rakitic has won seven finals in the last four seasons with Sevilla and FC Barcelona, while Modric has won 10 consecutive finals with Real Madrid.

World Cup 2018 has been Kylian Mbappe’s coming-out party. He joins elite company in starting the game.

9:30 a.m. ET: Here are the starting lineups and expected formations.

The team news is in…

9 a.m. ET: Will a budding soccer juggernaut deny an upstart from pulling off one of sports’ greatest upsets?

France will face Croatia Sunday at Luzhniki Stadium in Moscow, Russia, in the 2018 FIFA World Cup final. France enters the contest as the firm favorite as it seeks to win its first world championship since 1998. Croatia, which emerged as an independent nation in 1991 from the ashes of the former Yugoslavia, already has clinched its best-ever World Cup finish and now seeks to bring home the coveted trophy for the first time.

France’s road to the final has been straightforward. After finishing first in Group C, France blew past Argentina in the Round of 16, then edged by Uruguay in the quarterfinals and Belgium in the semifinals.

Croatia’s trip to the final has been far more dramatic than France’s. Croatia topped Group D, then beat Denmark on penalty kicks in the Round of 16, Russia on penalties in the quarterfinals and England in extra time in the semifinals.

France vs. Croatia will kick off at 11 a.m. Join us right here for all the action from Moscow. 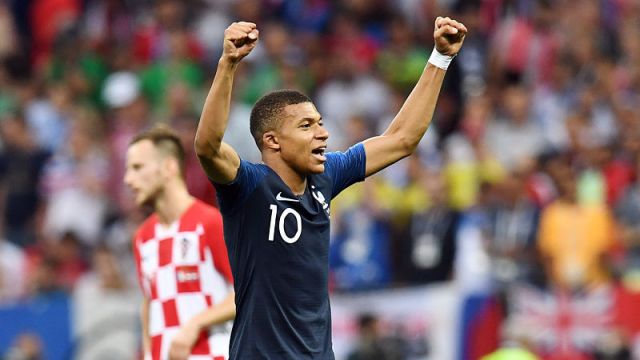 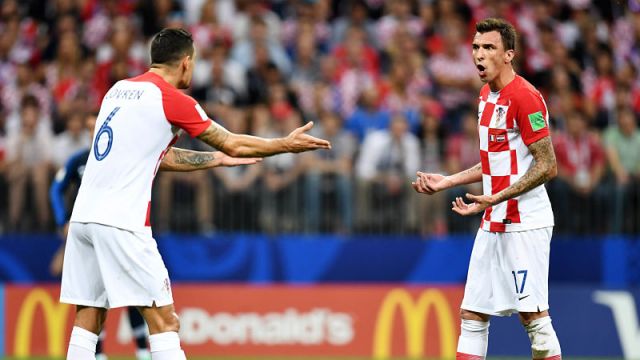