The Red Sox swung the bats well Tuesday evening, but it wasn’t quite enough.

Despite mashing four home runs, Boston fell to the Baltimore Orioles 7-6 the second contest of a three-game set at Camden Yards.

J.D. Martinez hit a pair of homers, but the second longball — a two-run blast — was too little, too late.

Monday’s game was interrupted twice due to rain, and Tuesday’s game had to contend with weather as well. This time, however, there was just one stoppage and it only lasted 27 minutes.

GAME IN A WORD
Longball.

There was no shortage of dingers in the game, with the O’s hitting a pair of homers in addition to Boston’s four.

ON THE BUMP
— Drew Pomeranz made his first appearance since May 31st, and things didn’t go overly well. The southpaw allowed four runs on six hits over 4 2/3 innings, walking two and striking out four. All of the runs he surrendered came via homers.

Things got off to a good start, with Pomeranz just walking one in a hitless, scoreless first. He then allowed one hit in a scoreless second. But with Boston ahead 1-0 in the third, Jonathan Schoop smacked a one-out, two-run homer.

Pomeranz settled back down in the fourth, allowing just one hit in the frame, but things again went off the rails in the fifth with the Sox ahead 3-2. After a leadoff walk to Caleb Joseph, Tim Beckham hit a two-run shot of his own, sending the O’s ahead.

Pomeranz got the next two outs, but after allowing a single to Mark Trumbo, manager Alex Cora went to the bullpen.

— Tyler Thornburg entered with one runner on in the fifth and struck out Danny Valencia to end the inning.

— Joe Kelly began the sixth, and his poor run of form continued.

After inducing a groundout to begin the inning, he walked the next two hitters before allowing a single to load the bases. Beckham then hit a sacrifice fly, upping Baltimore’s advantage to 5-3. Schoop then made it 6-3 with an RBI single, with the base knock ending Kelly’s night.

— Hector Velazquez took over with two down and runners on first and second. Adam Jones, the first batter Velazquez faced, singled in one more run to make it 7-3. Velazquez then got Trumbo to line out the next at-bat to end the inning.

The right-hander stayed on for the seventh and eighth, tossing two clean innings in which he only allowed one runner to reach base via walk.

IN THE BATTER’S BOX
— It did not take long for Martinez to do what he so often does. With two down in the top of the first, O’s starter Yefry Ramirez left an 0-1 fastball up and away, and the Sox slugger put the ball in the right-center field seats.

— Entering the fifth trailing 2-1, the Sox responded with an impressive frame. With two outs, nine-hole hitter Blake Swihart clubbed his first homer of the season, tying the game after the ball narrowly passed the fence in right-center field.

The next batter, Mookie Betts, did more of the same. The star right fielder blasted a solo shot into left, giving the Sox a 3-2 advantage.

— The Red Sox entered the eighth trailing 7-3, but they did cut into the deficit. With Betts standing on first with one out, Martinez hit his second home run of the night, drilling a ball into right to make it 7-5. With the blast, Martinez retook the league lead in homers.

— Boston made things interesting in the ninth with a two-run deficit. Jackie Bradley Jr. led the inning off with a single but moved to second after the throw to first went into the dugout. Brock Holt then moved Bradley to third, and Rafael Devers scored the center fielder with an infield single, narrowing the deficit to 7-6.

Swihart then walked, putting runners on first and second with one out for Betts. Unfortunately for Boston, the right fielder grounded into a double play to end the game.

— Swihart, Bradley and Mitch Moreland all had one hit.

CORRECTION: J.D. Martinez is the 10th player to hit 30+ HR in his first season with the Red Sox:

UP NEXT
The Red Sox will play the rubber match of their three-game set with the Orioles on Wednesday. David Price is set to get the ball for Boston and will be opposed by Dylan Bundy. First pitch from Camden Yards is scheduled for 7:05 p.m. ET. 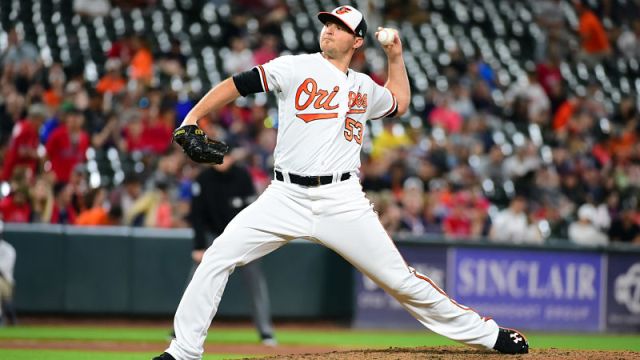 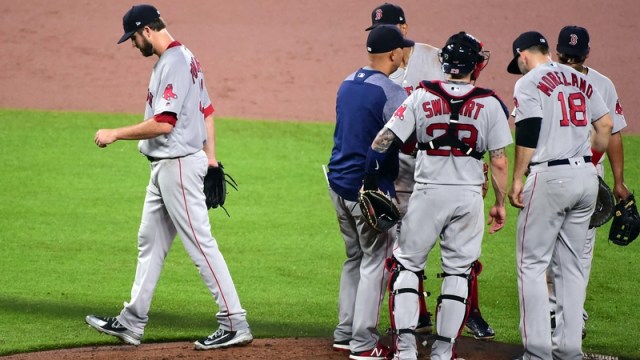