Steve Pearce’s three home runs Thursday against the New York Yankees will get most of the headlines, but what if we told you the play of the game wasn’t a long ball but a slide? Would you believe it?

The Boston Red Sox trailed the Yankees 4-2 during the fourth inning at Fenway Park, but their fortune soon would change against New York’s bullpen.

Jackie Bradley Jr. led off the inning with a walk and moved to third on a double by Mookie Betts. Andrew Benintendi was the next man up and he chopped a ball back to Jonathan Holder, who immediately turned to third and had Bradley hung up in no man’s land.

Holder threw behind Bradley instead of running at him. The Red Sox center fielder turned and bolted for home, narrowly avoiding the tag by catcher Austin Romine to cut the Yankees’ lead to 4-3.

.@JackieBradleyJr is safe at home and the @RedSox continue to threaten in the 4th on #MLBNShowcase! pic.twitter.com/T4OsMUikau

Boston would go on to score eight runs in the inning, en route to a 15-7 win and Bradley’s slide transformed what could have been another disappointing inning into Boston’s best offensive frame of the season.

“Oh, that was a game-changer right there,” Pearce told NESN’s Guerin Austin about the slide after the win. “That was a great play, great slide and, you know, to avoid that tag and, you know, you could really feel the momentum start swinging our way. You felt the crowd start to get into it and we took advantage of it.”

Manager Alex Cora was complimentary of Bradley’s ability to turn a bad baserunning move into a momentum-shifting play.

“Well he got caught in no man’s land there and he made a decision,” Cora said, as seen on NESN’s postgame coverage. “They threw behind him and he took off. It went from a bad baserunning play to a great slide and it brought energy to the stadium, to the dugout. He’s such a good athlete that he made a decision, he reacted and it worked for us.”

Boston had left runners on in each of the first three innings, so if Bradley had been caught it could have led to much of the same in the fourth. But Bradley beat the throw home and ignited an offensive onslaught that handed the Red Sox Game 1 of the series.

— Blake Swihart exited the game with hamstring tightness. He went 0-for-3 before being taken out, snapping his 11-game hitting streak. Cora noted that the young catcher was just a little tight and the Red Sox are hopeful he will be available Friday.

— The Red Sox’s offense has had some impressive outburst against the Yankees this season.

This is the 7th time this season that the Yankees have allowed 10+ runs (3 of the 7 have come against the Red Sox).

They did that just 7 times all of last season. pic.twitter.com/sUXecOrqpt

— Brian Johnson recorded a career-high 11 strikeouts in the win over the Yankees.

— Coming into Thursday’s game, the Yankees’ bullpen hadn’t allowed more than six earned runs in a game. They allowed eight in the fourth inning alone and 11 total. 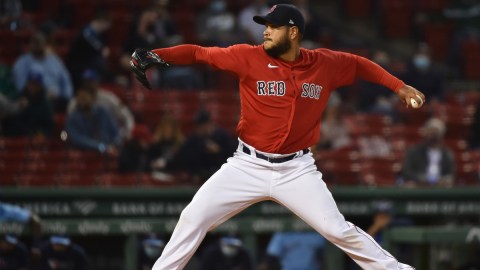 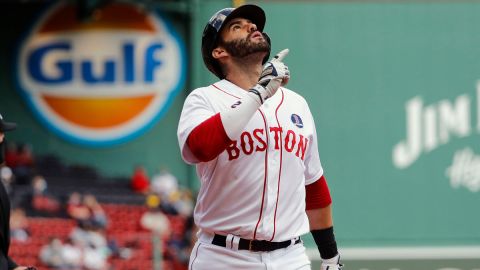 Red Sox Notes: No One Hotter Than J.D. Martinez As Sox Salvage Split 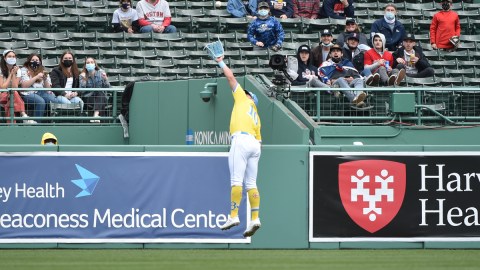