Get your brooms out.

It looked as if the New York Yankees were going to squeak out a win Sunday night, but a ninth-inning, two-out rally paved the way for the Boston Red Sox to complete a four-game sweep over their American League East rival.

The Sox trailed by three runs with two outs in the ninth inning but came back to tie the game and send it to extras, where Andrew Benintendi played hero with a walk-off single to lift the home team to a 5-4 win at Fenway Park.

David Price, who has had his fair share of troubles against the Yanks since joining the Sox, seemed to figure out the New York lineup Sunday night. He pitched a strong outing, allowing two runs (both inherited) over six innings on four hits and three walks while striking out five.

Boston completed its four-game sweep, but it didn’t come easy, as extra innings were needed to decide the thrilling win.

ON THE BUMP
— Price was brilliant on the hill, pitching into the seventh inning before Sox manager Alex Cora made the call to the bullpen.

The southpaw mowed down five Yankees batters and pitched his way out of jams in the first and fifth innings. He came out for the seventh and put the first two batters he faced on after Brett Gardner singled and Austin Romine walked.

After Hembree struck Didi Gregorius out, Cora made his second pitching change of the inning.

— Ryan Brasier got the final two outs of the inning, but not without giving up a sacrifice fly to Gleyber Torres for the Yankees’ fourth run of the game. Brasier allowed one hit and recorded a strikeout in the eighth.

IN THE BATTER’S BOX
— The Red Sox threatened to do damage in the third inning after Mookie Betts and Andrew Benintendi each singled with one out, but Steve Pearce and J.D. Martinez both struck out to end the threat.

— Boston would strike first in the fifth, however, when Betts sent a towering solo home run over the Green Monster for a 1-0 lead.

— The Red Sox made it interesting in the ninth after Yankees closer Aroldis Chapman gave up consecutive walks to bring the tying run to the plate in Benintendi, but he struck out looking for the second out of the frame.

— Pearce then drew a walk, bringing Martinez to the plate with two outs. He roped a double to center to drive in two runs and make it a one-run game.

— The Sox weren’t done, as Bogaerts hit what should have been the game-ending groundout to third. But the shortstop reached on a Miguel Andujar throwing error, and pinch-runner Jackie Bradley Jr. scored Boston’s fourth run from third base to tie the game.

— Sandy Leon singled to start the 10th and later took second on a wild pitch, putting him in scoring position. Betts was intentionally walked before Benintendi made his plate appearance count with the game on the line and drove in pinch-runner Tony Renda to complete the comeback.

— Benintendi led the way for Boston with three hits, while Eduardo Nunez and Betts each had two.

UP NEXT
Boston will enjoy an off day Monday before taking on the Toronto Blue Jays on Tuesday in the first of a three-game set. Drew Pomeranz will take the hill for the Red Sox opposite Marcus Stroman. First pitch from Rogers Centre is set for 7:07 p.m. ET. 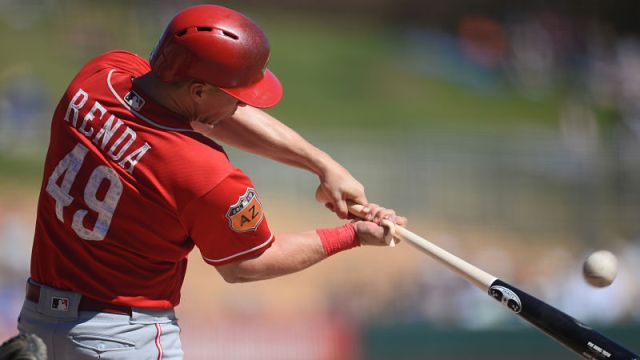 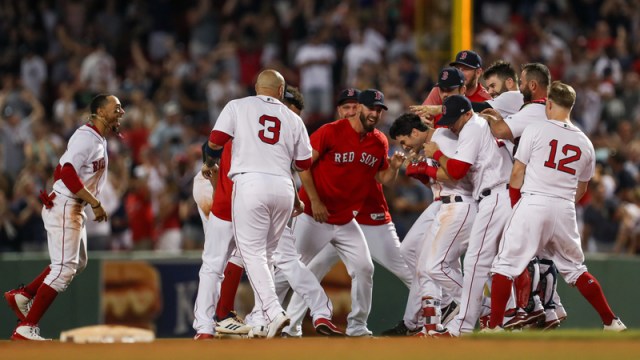