No one could blame Danny Ainge for thinking that this might be Kyrie Irving’s final season in a Boston Celtics uniform.

The All-Star guard can become a free agent next offseason, and has stated he is not willing to sign an extension during the 2018-19 campaign, as it would cost him around $80 million that he could make by signing a new contract next offseason. Rumors swirled all offseason about Irving potentially heading to the New York Knicks or Brooklyn Nets to team up with Jimmy Butler, which certainly have caused quite a panic amongst Celtics fans.

Irving has been singing a different song of late, though. The Duke product threw cold water on the rumors of him wanting to link up with Butler, noting the two haven’t talked at length about it since 2016, and has been vocal about his excitement regarding the C’s championship-level roster.

If you ask Ainge, though, that’s how the guard has been all along.

?I don?t think that?s ever a change of tune,? Ainge said Wednesday, per Boston Sports Journal’s Brian Robb. ?I mean, I?ve heard him, I?ve talked to Kyrie a lot ? maybe he?s changed his tune with you, but he has been very positive from the day he got here. I talk to Kyrie all the time and his representation. I think Kyrie is very, very happy here in Boston. Always has been. And I think that we?ll hopefully make it a place that he?ll want to stay for much longer when the season ends.?

There’s very little reason Irving shouldn’t want to stay in Boston for the prime years of his career. Ainge has built the Celtics into the premier team in the Eastern Conference with the help of head coach Brad Stevens. Irving will be hard-pressed to find a team that can put the amount of talent around him that Boston can. Joined by Gordon Hayward, Jayson Tatum, Al Horford, Terry Rozier and Jaylen Brown, Irving and the Celtics are primed to challenge the Golden State Warriors for the NBA title this season.

And should Irving stay long-term, Boston is set up to be the league’s marquee team for the next handful of years. 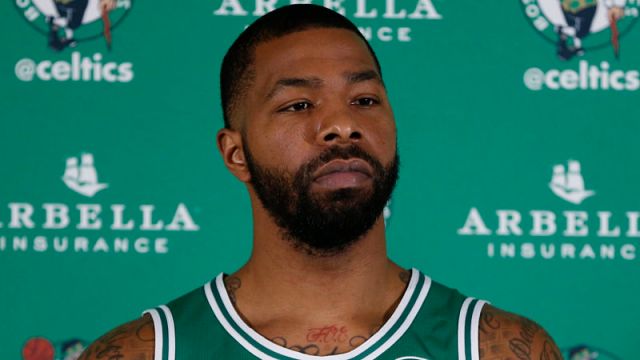