Week 3 in the NFL was absolutely crazy, and although Week 4 provided plenty of wild moments, it was a bit more modest.

Still, this past week’s action provided all sorts of shifting in the power rankings, as some squads are cementing themselves among the league’s best, while others started slipping, or in some cases, free-falling.

But with four weeks of action now in the book, here?s how we feel teams rank from No. 1 to No. 32. (For our Week 4 power rankings, click here.)

1. Los Angeles Rams (4-0; Last week’s rank: 1): Though it was a fairly tight contest against the Minnesota Vikings on Thursday, the Rams proved (again) that they are, in fact, the real deal.

2. Kansas City Chiefs (4-0; 2): This Chiefs’ offense is absolutely electric. Despite a slow first half, Patrick Mahomes kicked KC into gear down the stretch to keep his team undefeated.

3. New Orleans Saints (3-1; 4): Drew Brees didn’t even have a passing touchdown in the Saints’ 33-18 Week 4 win, but that just goes to show how explosive Alvin Kamara is. Their defense is average at best right now, but that is nary a worry with the weapons on offense.

4. Jacksonville Jaguars (3-1; 5): It’s a shame Blake Bortles isn’t better, but he’s still leading the Jaguars to wins without Leonard Fournette. Having a great defense surely helps, too, but that’s expected at this point. The success of Jacksonville almost certainly will rest on the offense’s performance this season.

5. New England Patriots (2-2; 14): Folks are breathing easy in New England, and for good reason. The Patriots climbed back up to .500, which is a pretty typical winning percentage for them in September. Oh, and they’re getting more weapons back with Julian Edelman’s suspension now over.

6. Tennessee Titans (3-1; 17): The Titans have posted impressive back-to-back wins, beating the Jags in Week 3 and Philadelphia Eagles in Week 4. Each game they’ve been in was narrow, but you can’t argue with the results at this point.

7. Cincinnati Bengals (3-1; 15): There’s a compelling race brewing in the AFC North. Andy Dalton is playing pretty well, which is overshadowing the fact that their defense isn’t that great. That may not last forever, but it’s working for now.

8. Green Bay Packers (2-1-1; 8): Aaron Rodgers doesn’t seem overly thrilled with the way the offense is working right now, but that means once they do get things together, the Packers really are going to start shredding teams.

9. Philadelphia Eagles (2-2; 6): Hey, the Titans are a good team. But starting off at 2-2 probably wasn’t what Doug Pederson was hoping for his Eagles. Still, Carson Wentz will keep getting better, and teams still will dread playing Philly.

10. Baltimore Ravens (3-1; 19): The Ravens revamped their offense for Joe Flacco, and it’s playing on his strengths. That coupled with a top-five defense means Baltimore may actually be legit.

11. Chicago Bears (3-1; 18): It’s time to go all-in on the Bears. Their defense is for real, and Mitchell Trubisky and Co. started holding up on their end of the bargain offensively in Week 4. If that keeps up, watch out.

12. Miami Dolphins (3-1; 7): Although they still remain the top team in the AFC East, the Dolphins were exposed Sunday, getting crushed by the Patriots. They could remain a solid middle-of-the-road team that can compete for a wild-card spot, but their opening pace probably isn’t sustainable.

13. Carolina Panthers (2-1; 11): The Panthers were one of two squads off in Week 4. Other teams playing well caused them to slip in the rankings, but expect them to pop right back up after a Week 5 home date with the New York Giants.

14. Minnesota Vikings (1-2-1; 3): Some lofty expectations were placed on the Vikings entering the season, and at this point, they probably should be tempered. They competed well against the Rams, but losing to Los Angeles on the heels of an ugly beatdown from the Bills means Minnesota needs to start proving its worth.

15. Atlanta Falcons: (1-3; 10): The Falcons have too much talent to be 1-3. Calvin Ridley has been great, and Matt Ryan still is a good quarterback. Getting Devonta Freeman back will be a plus and likely will boost Atlanta to where they should be.

16. Pittsburgh Steelers (1-2-1; 9): It may be time to admit the Steelers just aren’t that good. Le’Veon Bell coming back (possibly for their Week 8 game) will help, but the backfield isn’t their only issue.

17. Los Angeles Chargers (2-2; 13): You only can use the “tough schedule” card for so long, especially when you only beat the San Francisco 49ers by two points. The Chargers should be fine as the weeks go on, but we’re pretty meh on them right now.

18. Denver Broncos (2-1; 16): The Broncos fell to .500 in Week 4, but they put up a valiant effort at home against the Chiefs on “Monday Night Football.” Denver still isn’t much to write home about, but it’s not a pushover.

19. Washington Redskins (2-1; 20): The Skins were idle in Week 4, but they get bumped up because of ineptitude from some other teams. How good they are remains to be seen, but they are an intriguing bunch.

20. Seattle Seahawks (2-2; 22): The Seahawks probably should have won more convincingly against a lowly Arizona Cardinals team in Week 4, and losing Earl Thomas doesn’t help. This team is loaded with holes.

21. Tampa Bay Buccaneers (2-2; 12): Well, the magic is gone. Tampa was dusted by the Bears on Sunday, prompting head coach Dirk Koetter to assert everyone on the Bucs (himself included) should be fired. That’s dramatic, but expect the Bucs to start cellar dwelling in the near future.

22. New York Giants (1-3; 21): The Giants have some weapons, sure, but they’re not ready to compete against the league’s best, as evidenced by their Week 4 loss to the Saints.

23. Dallas Cowboys (2-2; 23): Beating a team you should beat in the Detroit Lions is good, but that means Dallas’ wins this season are against the Giants and Lions. Yawn.

24. Cleveland Browns (1-2-1; 24): Losing to the Oakland Raiders isn’t the best look, but the Browns continued to show that their offense can be exciting. They aren’t an automatic victory for the opposition anymore.

25. Houston Texans (1-3; 25): For as much hype as the Texans had entering the season, boy do they have some issues. They got their first win in Week 4, but it helps that the Indianapolis Colts essentially handed the game to them in overtime.

26. Detroit Lions (1-3; 26): Yep, that win over the Patriots was a flash in the pan. They narrowly fell to a Cowboys team that also is a pretty uninspiring bunch.

27. San Francisco 49ers (1-3; 27): There’s exactly zero reason to be excited about the Niners with Jimmy Garoppolo done for the year. They showed some resolve against a likely playoff team in the Chargers, but San Fran is going nowhere.

28. Indianapolis Colts (1-3; 28): If nothing else, this Colts team has plenty of will to win and doesn’t go down easily. The problem is, they usually go down in the end.

29. New York Jets (1-3; 29): The Jets’ lone win this season was against the Lions, and that’s about the level of competition they can compete with. The Jags made easy work of New York in Week 4.

30. Oakland Raiders (1-3; 30): Credit to the Raiders, they finally got in the win column, albeit against the Browns. But their defense still is dreadful, and there’s no reason to think these victories will start coming in bunches.

31. Buffalo Bills (1-3; 32, 31): We’re not sure this comes as much of a surprise, but the Bills’ upset win over the Vikings was just that, an upset. They returned to their losing ways by getting their doors blown off by the Packers.

32. Arizona Cardinals (0-4; 32): The Cardinals remain the only team in the league without a win, and it’s for good reason. They stink. 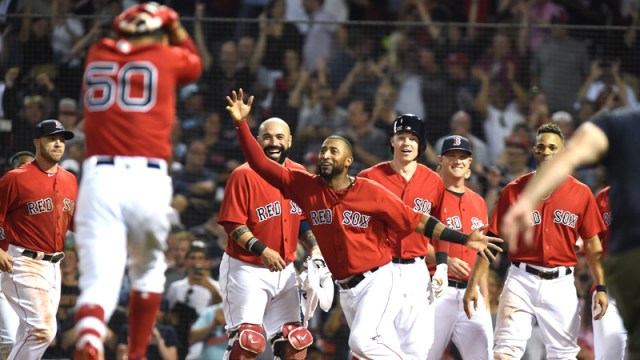 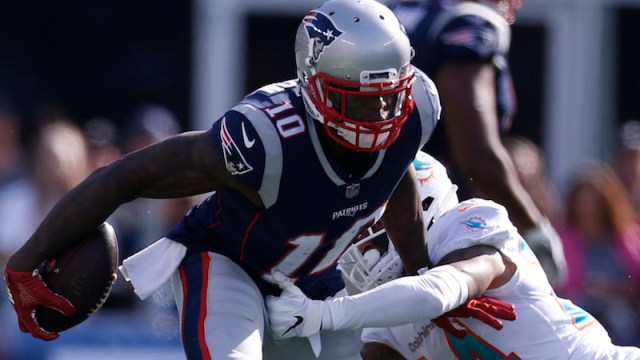 Patriots-Dolphins Film Review: How Was Josh Gordon Used In Debut?