Patriots Mailbag: Does Tom Brady Now Have One Of His Best Set Of Weapons? - NESN.com Skip to content

“Thursday Night Football” games have actually been entertaining this season, so no one is complaining about watching them, but now is a good time to mention how crazy it is that the NFL forces players to take the field on three days rest.

Based on talking to players this week, it definitely seems to affect older players (other than Tom Brady) more than young ones. Defensive end Deatrich Wise was ready to get back onto the field immediately after Sunday’s game, but Jason McCourty and Matthew Slater weren’t quite as thrilled. Brady said he doesn’t mind playing on Thursday night because he doesn’t need a lot of practice at this point in his career.

Now with Gordon and Edelman back has Brady went from his worst set of weapons to maybe his best set of weapons?
— @Gradyismydog
This sounds crazy on the surface, but is it?

You can probably eliminate the pre-2007 era offenses. As good as players like wide receivers Troy Brown and David Givens and running backs Antowain Smith and Corey Dillon were, there was no truly dominant receiving weapon on those teams.

But Moss lasted just four games, Welker was coming off a torn ACL, Hernandez and Gronkowski were rookies, Branch was acquired midseason and Edelman and Faulk each had less than 110 yards from scrimmage. If all of those players were in their prime, it would have been the greatest offense of all time. But they weren’t.

In the recent era, the 2016 team probably had the best weapons with Edelman, White, Hogan, Gronkowski, running backs LeGarrette Blount and Dion Lewis, tight end Martellus Bennett and wide receivers Malcolm Mitchell and Danny Amendola. Gronkowski got hurt halfway through the season, Lewis came back midway through the year from a knee injury and Amendola was barely used during the regular season.

Brady’s never had more than two No. 1 caliber receiving threats. He had Moss and Welker, Welker and Gronkowski and Edelman and Gronkowski.

There are a lot of ifs involved with the 2018 squad, but if Gronkowski, Edelman and Gordon can all stay on the field, and if Gordon can regain his 2013 or 2017 level of play, then this probably is the best set of weapons Brady has ever had. Is it likely to be? No, probably not based on Gordon. But based purely off potential, this offense could be absolutely loaded.

@DougKyed Who is the most improved Patriot from last year so far? #maildoug
— @yirt
The top choices are Dorsett, linebacker Kyle Van Noy or defensive tackle Lawrence Guy.

I want to say Van Noy, but Dorsett is probably more accurate.

Since Trey Flowers has evolved to become one of the most important parts of the defense in the past few years can we officially say that we won the Logan Mankins trade? #MailDoug
— @TroyGetsTheBag
The Patriots pretty much won that trade as soon as they stopped playing Jordan Devey at guard.

Mankins is the unluckiest player in Patriots history, and he’ll probably go down as the most underrated. The Patriots won Super Bowls the year before he was drafted and the year after he was traded. He was a seven-time Pro Bowl selection and six-time All-Pro and should absolutely be in the Patriots Hall of Fame, but I fear it will never happen because he never won a Super Bowl. Those 2005 to 2013 Patriots teams will go largely forgotten.

#maildoug What do you think are reasonable expectations for Edelman in his first game back?
— @MrQuindazzi
I’d expect Edelman to play about 50 percent of snaps. The Patriots limited Rob Ninkovich in his return from a four-game suspension in 2016, and he wasn’t coming off a torn ACL.

Edelman’s ACL tear occurred over 13 months ago, however, and he played in the preseason, so it’s not as if he’s completely rusty.

Who gets cut in order to add Edelman to roster?
— @TommyG64010544
The top three candidates are probably defensive ends Geneo Grissom and Keionta Davis and offensive tackle Cole Croston.

I think it makes sense to waive Grissom, put him on the practice squad until he’s healthy and then bring him back and waive another player. The Patriots don’t need Croston, however, and they already got him through waivers once.

The Patriots also don’t need Davis, but they might fear losing him on waivers.

I know you’ve mentioned this before, but why does it appear that Cooks was useless here compared to what he’s doing with LA? Is it coaching? Is it the system that’s run in NE? Is it the lack of other weapons here?
— @pereira_report
I think useless is a strong word. Cooks still had 65 catches for 1,082 yards with seven touchdowns last season with the Patriots.

Cooks put up similar stats with the New Orleans Saints through the first three years of his career, so I think his ascension this season has much more to do with the Los Angeles Rams’ high-powered offense than anything the Patriots did.

I also think Cooks winds up slowing down this season, however.

Are we expecting Derek Rivers to play this week against the Colts? What was his injury?
— @Patriotintn
Rivers doesn’t have an injury. The Patriots clearly feel he’s just not ready to play a role on defense. He only was active in Week 3 so far.

It’s not completely out of the realm of possibility Rivers could be released to make room for Edelman. It’s very unlikely, but there’s a non-zero chance it happens. I’d like to see Rivers get more snaps, though. He’s only played 13 snaps all season.

Is Grigsby deserving of more playing time?
— @RyanBuske
Not from what I’ve seen.

Why are Patriots fans so miserable?
— @RP3sViews
Winning does that for some reason. Higher expectations or something?

Is trey flowers the key to this defense?
— @DebatingPatriot
Is the Flyers’ new mascot weird?

Who is the biggest comedian in the locker room
— @PatsFanMatt
Probably Gronk, Edelman or Deatrich Wise Jr.

What do you think is reason #12 has looked a little bit off so far this season? #MailDoug
— @JordanLeandre55
The lack of weapons. That will change with Edelman back.

Which new Patriots have been the best interviews so far? #MailDoug
— @TeamCrazyMatt
Jason McCourty.

What WWE wrestler would make the best NFL player?
— @RondaRouseyFan
Mojo Rawley, Brock Lesnar and Roman Reigns actually were in the NFL. I’ll go with Finn Balor, though. Let him play slot receiver.

How good does Michel need to to be to live up to his draft capital? Lindsay (DEN) looks damn good as a UDFA.
— @southpawXLIX
A few 1,000-yard seasons plus contributions in the passing game would do it.

What?s up with Chris Hogan?s rather slow start? And do you think Edelman?s return could help boost Hogan?s numbers? #maildoug
— @brendanpowers6
He’s not a great fit for the slot in the Patriots’ offense. I think he starts playing better when he lines back up outside.

Do you prefer burgers or tacos?
— @DelGrex
That’s a tough question, Del. I’ll go with burgers.

Did you end up going apple picking (follow up from previous question)? #MailDoug
— @Kid_From_Quincy
Yes. I like the idea of apple picking, and I like getting apple cider donuts and being around pumpkins and basic fall stuff, but actual apple picking is kind of boring.

Who will be the 71st player to catch a TD off Brady? My money is on Gordon with Michel as a slight outsider
— @weaverian
Gordon.

Also, is there an invisible ghost who follows Cordarelle Patterson around and trips him on screen passes?
— @Taghkanic
Yes. It’s a friendly ghost, though. It’s like Caspar.

Why do you think Orleans Darkwa hasn’t been signed yet?
— @pereira_report
I think he must still be injured. Otherwise, it doesn’t make sense that he’s not on an NFL roster.

Is BB going to hold Gronk out Thursday to ensure Gronkowski doesn’t hit his bonus milestones because Bill is mad Gronk publicly acknowledge the trade attempt? #ConspiracyTheory #MailDoug
— @ejlinehan
That’s quite a conspiracy theory, but I actually think the incentives entice Gronkowski to play.

Do you have any questions for us?
— @DanielVConnolly
Any kind of content you’d prefer more or less out of me? Tweet me some feedback. @DougKyed. Don’t be mean, though.

#MailDoug How are you
— @caleb21k
I’m great. I’m currently writing this while my 1-year-old is asleep. Thursday night games are tough on players but great for reporters. We get the weekend off. 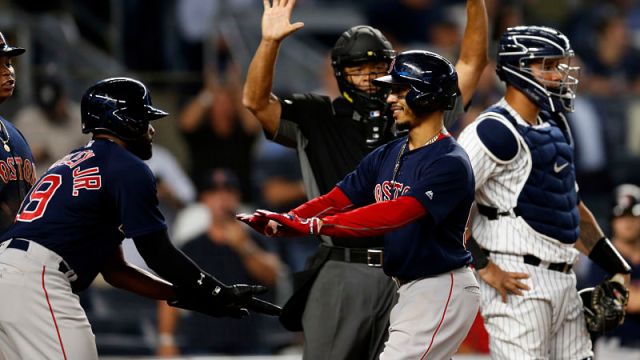