The Boston Red Sox have grown accustomed to seeing Chris Sale dominate every time he takes the mound.

The left-hander typically embarrasses hitters with a combination of a high-end fastball, filthy slider and precise command. Unfortunately for Sale, his strengths evaded him Saturday night at Fenway Park.

Boston’s ace turned in an underwhelming start in Game 1 of the American League Championship Series, tossing just four innings in which he allowed two runs on one hit with four walks. Sale’s fastball topped out in the low-90s for the majority of his outing, and his slider was practically non-existent.

Sale’s lackluster start was just the beginning of the Red Sox’s frustrating night as the Houston Astros handed the home team a 7-2 loss.

The second inning was the most concerning for Sale, who allowed two walks and hit a batter after recording the first two outs of the frame. The Astros seized the opportunity when George Springer smacked a two-RBI single, giving Houston a lead it would not relinquish.

Sale didn’t address his decreased velocity after the game, but he did own up to his lack of command, which he struggled to find throughout the night.

“I just lost command,” Sale said, as seen on NESN’s Red Sox postgame coverage. “Kind of out there searching for it for a little bit. Just do the best you can to kind of corral it in and limit the damage and get out of there as quick as possible.

“It’s just one of those things that happen. You get out there and you’re batting yourself. That was definitely the case.”

Given the way Sale looked Saturday night, immediate concerns arose regarding his health. Manager Alex Cora claimed the southpaw isn’t injured and also explained why he yanked his starter after the fourth inning.

“No. Early in the game he was off but then at the end he was (throwing) 93, 94 (mph),” Cora said. “He finished strong actually, but I felt like where we were in the game it was (Josh) Reddick and then the top of the lineup, it was better off going to somebody else. The other guys came in and did a good job.

“It was more about where we were in the game and the way they were grinding at-bats. It was hard for him (Saturday). It was a one-pitch pitcher. You know, fastball and fastball glove side. Besides that, he threw three good sliders in the third inning to finish off and then the last inning was a lot better. Velocity-wise he finished strong. He wanted to go out again and I was like, ‘No. It’s going to be a long series and we need you.’ ”

There’s no doubt the Red Sox need Sale. And if the tall lefty can’t find his groove in short order, Boston’s postseason run could be over in no time.

Here are some other notes from Saturday’s Red Sox-Astros Game 1:

— The Astros managed to flood the bases despite connecting on just five hits, as Red Sox pitching issued 10 walks and hit three batters to go along with an Eduardo Nunez fielding error.

— Houston added some insurance in the ninth inning when Reddick connected on a solo blast and Yuli Gurriel tucked a three-run home run around Pesky’s Pole. The reigning World Series champs now have hit at least one homer in 13 consecutive playoff games.

— Mitch Moreland proved to be one of the lone bright spots for the Red Sox. The first baseman evidently isn’t too bothered by his injured hamstring, as he pinch hit in the fifth inning and drew a walk to plate Boston’s first run of the game.

— Cora was ejected after the fifth inning following a shouting match with home-plate umpire James Hoye, who rung up Andrew Benintendi on a questionable strike-three call with two outs and bases loaded. The first-year skipped only was ejected one time during the regular season.

— The Game 1 winner has went on to win the series in 31 of the previous 48 ALCS matchups. 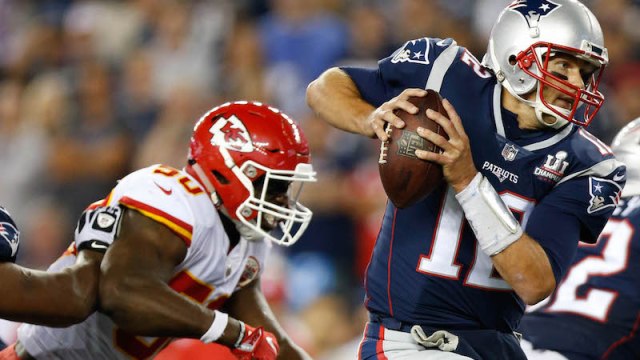 Are Patriots Actually Catching Injury-Riddled Chiefs At The Right Time?