Steve Pearce was just like every other Boston sports fan Sunday night — you know, except for the whole playing for the Red Sox thing.

Pearce started at first base as the Red Sox defeated the Houston Astros 7-5 in Game 2 of the American League Championship Series at Fenway Park. He wasn’t available to speak with reporters immediately after Boston’s win, though, because he was busy watching on TV as the New England Patriots put the finishing touches on a 43-40 win over the Kansas City Chiefs.

Pearce, a huge Patriots fan, obviously was focused on the Red Sox’s task at hand Sunday night, but that doesn’t mean he wasn’t curious about what was happening at Gillette Stadium, where Tom Brady and Co. hosted the previously undefeated Chiefs in a crucial AFC showdown.

“I was born into it,” Pearce said. “From Florida, born and raised, but I had no choice. My parents are from up here so I was brainwashed.”

In other words, don’t accuse Pearce of jumping on the bandwagon and supporting the Patriots only after his midseason trade to the Red Sox from the Toronto Blue Jays. He has always been a fan, and even a pesky playoff baseball game won’t stand in his way of cheering on the Pats. 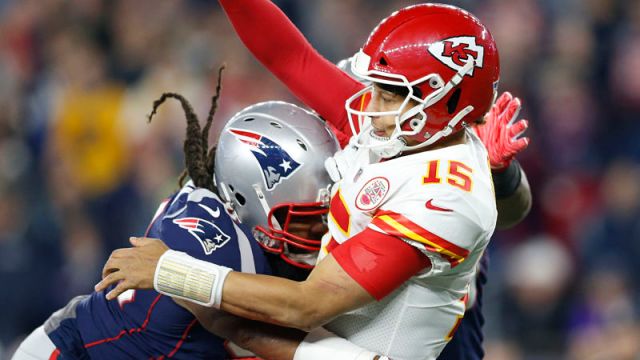