What Went Wrong For Patriots On Big Plays Allowed In Win Over Chiefs? - NESN.com Skip to content

FOXBORO, Mass. — It didn’t take a seasoned NFL scout to notice the biggest difference for the New England Patriots defense between the first half and second half Sunday night.

The floodgates opened to start the second half when Patriots cornerback Jason McCourty was burned in coverage by Chiefs running back Kareem Hunt on a 67-yard touchdown pass from quarterback Patrick Mahomes.

“I just gotta do a better job of, on a scramble, of what we call plastering him and getting to him and getting between him and the ball and the man,” McCourty said. “That was on me. Just didn’t do a good enough job on that play.”

The Patriots allowed a 97-yard kick return to defensive back Tremon Smith with 10:22 left in the second half. The Chiefs scored a touchdown three plays later.

“I don?t know what happened,” special teams captain Matthew Slater said. “We got to look at that on film. It was bad. I think we?re a lot better than what we?ve played out there, so we better figure it out quick. I think we have to be better fundamentally; we got to get out of the box and use our hands better. We have to play together and trust it. The guy next to us is going to be where he?s supposed to be and we have to improve. We put our team in a tough spot tonight giving up that return and they bailed us out.”

Safety Devin McCourty was in coverage on two of speedy receiver Tyreek Hill’s touchdowns, a 14-yarder and a 1-yard score after Smith’s 97-yard return.

“Just trying one leverage, and him running away,” McCourty said of the first TD. “Just trying to get there. They did a good job, the second one, with a little pick action, kind of setting him up. And overthrowing Hunt or throwing to him. Just tough playing one leverage and trying to catch him going the other way.”

The Patriots appeared to have a blown coverage on a 75-yard touchdown catch by Hill. Safety Duron Harmon was on an island in the middle of the field tasked with covering — or chasing — Hill by himself. Harmon wouldn’t throw his teammates under the bus when asked if he was supposed to have help.

“I mean, everybody knows he’s fast, he’s super fast, he’s the fastest guy in the NFL. It was a tough angle from myself, but I still gotta find a way to try to get him on the ground if I just have to run straight for the pylon. It was just a tough play right there.”

Jason McCourty also wouldn’t divulge too much on the 75-yard score by Hill.

“We just didn’t do a good enough job of getting to him and getting him on the ground, as a defense,” McCourty said. 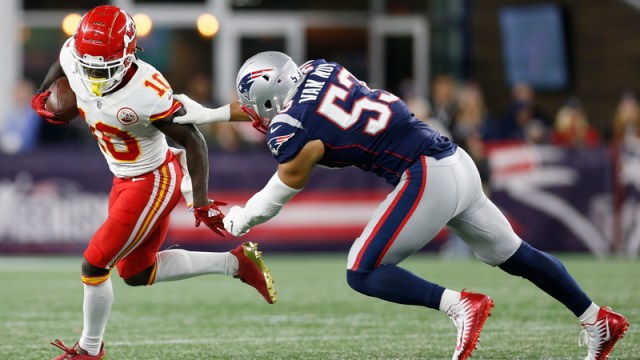