Who Helped Patriots Most In 38-24 Week 5 Victory Over Colts? - NESN.com Skip to content

FOXBORO, Mass. — The New England Patriots certainly weren’t perfect in their 38-24 Week 5 win over the Indianapolis Colts, though you might not know it from their margin of victory.

The Patriots wound up beating the Colts by two touchdowns to head into a semi-bye week 3-2, but as late as the fourth quarter, this was a one-score game.

There was just enough meat on the bone, from dropped passes that led to interceptions to poor coverage, that Patriots head coach Bill Belichick still should be able to light into his team this week. The Patriots won’t have inflated heads in their weekend off after Friday’s film review.

Here are the six players who helped the Patriots most in their third win of the season:

QB TOM BRADY
Brady’s stat line doesn’t look very pretty. He completed 34-of-44 passes for 341 yards with three touchdowns and two interceptions. But both of Brady’s interceptions came on passes dropped by his receivers.

Wide receiver Chris Hogan let a ball slip through his hands and into the waiting arms of Colts safety Matthias Farley.

Tight end Rob Gronkowski had the ball in his hands before he was popped. The ball flew in the air and was caught by linebacker Najee Goode.

Take out those interceptions and Brady suddenly looks dominant.

RB JAMES WHITE
White was the star of the game, catching 10 passes on 13 targets for 77 yards with a touchdown. He also carried the ball twice for no gain.

That’s just what the Patriots have come to expect from White.

RB SONY MICHEL
Michel carried the ball 18 times for 98 yards, including a 34-yard touchdown. He came 2 yards away from his second consecutive 100-yard game. Not bad for the rookie.

WR JOSH GORDON
Brady finally has a wide receiver he can trust to make a contested catch. Brady threw up a prayer to Gordon, who was double covered in the end zone. Gordon came back for the ball and caught it over both defenders for a touchdown.

He finished with two catches for 50 yards and the score.

Chung allowed four catches on six targets for 49 yards with the pick.

CB JASON MCCOURTY
McCourty was targeted a team-high 10 times, but he let up just three catches with two pass breakups. One of those pass breakups led to a Jonathan Jones interception.

McCourty’s twin brother, Devin, forced and recovered a fumble, but he also let up two touchdowns. 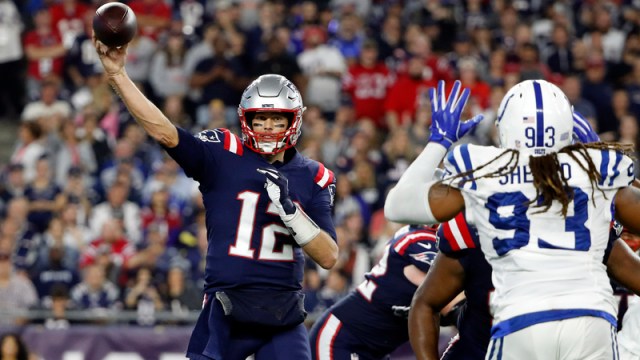