The Boston Bruins bounced back nicely Saturday, and they have David Pastrnak to thank.

The young winger recorded the Bruins’ third hat trick of the season, his second, as Boston responded to its drubbing at the hands of the Vancouver Canucks by dispatching the Toronto Maple Leafs 5-1 at TD Garden.

Pastrnak potted a pair of second-period goals, then clinched the hattie with just under six minutes to play in the third. The winger also added an assist on Patrice Bergeron’s lone goal of the night. Joakim Nordstrom was the B’s third goalscorer, burying his third of the season to put the nail in the coffin. John Tavares netted the lone Toronto tally.

Jaroslav Halak made 40 saves for the Bruins, while Leafs netminder Garret Sparks turned away 29 shots.

B’S OUTSHOT, BUT SCORE FIRST
Hockey is a weird game, and that was clear in the first period. Halak was absolutely peppered with shots, turning away all 20 attempts he saw in the opening frame. The Bruins were outshot 20-6, but it was that sixth shot for Boston that provided the only goal of the first 20 minutes.

Pastrnak did a fine job winning a puck battle in the corner against Morgan Rielly, then skated around the net and out wide, finally throwing it toward the top of the crease from the bottom of the face-off circle. Bergeron was there, providing a redirect at 16:12 to put Boston up 1-0.

.@pastrnak96 does the dirty work.

BOSTON EXTENDS LEAD
Pastrnak fed Bergeron to make the first goal of the game happen, and Bergeron returned the favor early in the second period.

The center gathered the puck and skated toward the end line, turning and feeding Pastrnak at the far face-off dot with an impressive pass. The winger executed, one-timing a missile past Sparks.

The winger wasn’t done, either. Just under five minutes later, Brad Marchand slid a deft backdoor feed to his fellow winger, and Pastrnak finished on the wide-open net to up the advantage to 3-0.

The Leafs got one back late in the period on the power play. Brandon Carlo took a bad penalty for roughing Kasperi Kapanen, and just before it expired Toronto executed.

Rielly slid a nice puck from the point across the ice to Mitch Marner, who drew Halak to the left side of his crease. Marner then dashed it over to Tavares on another nice cross-ice pass, and the center buried it.

JT finishes off a pretty passing play for his 10th.

Can the Leafs stage a comeback in Boston? pic.twitter.com/xD6nSTDmZY

PASTA GETS HIS HATTIE
With the Bruins looking to put the game out of reach, Pastrnak (of course) obliged.

Torey Krug carried the puck deep into the attacking zone, then turned and hit Pastrnak at the top of the face-off circle. Pastrnak sent it over to Marchand, who dished it right back to him as he dashed toward the net, and the winger buried it.

Although the damage was sufficiently done, Nordstrom landed the crushing blow 26 seconds later.

David Krejci won a puck battle near the end line, then turned and slipped it to Nordstrom as he darted toward the net. The winger quickly corralled the puck sniped a wrister home to up Boston’s lead to 5-1.

UP NEXT
The Bruins will play the second contest of a back-to-back Sunday night against the Vegas Golden Knights. Puck drop from TD Garden is set for 7 p.m. ET. 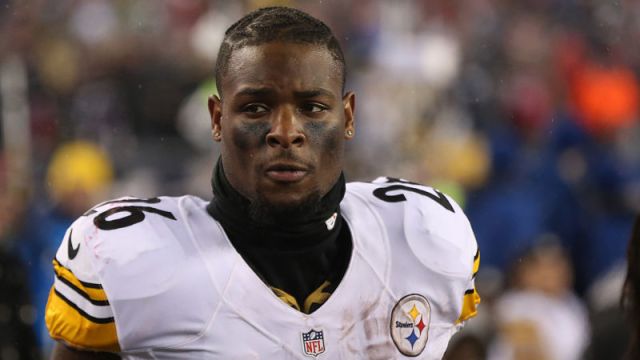 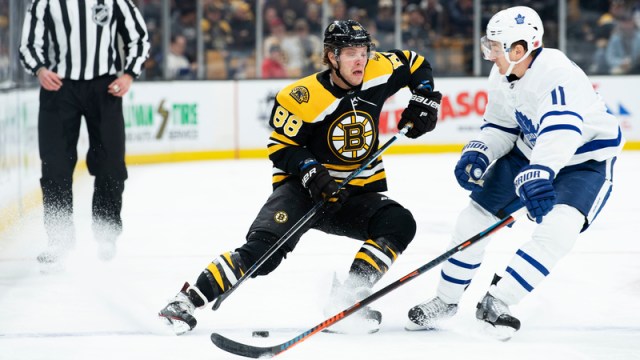 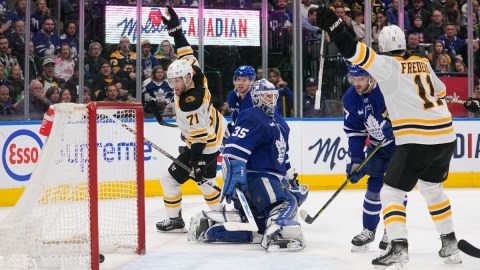