It doesn’t sound like the San Francisco Giants are shopping ace pitcher Madison Bumgarner, but they’re certainly willing to listen.

Morosi cited multiple sources who indicated the Giants would listen on Bumgarner, and it appears there might already be a market, as the Milwaukee Brewers and Philadelphia Phillies are among teams who reportedly have chatted with San Francisco.

Also on the radar, according to Morosi, is the Atlanta Braves, but it seems unlikely Bumgarner lands there.

In terms of assessing value, Bumgarner is a tricky case. The 29-year-old is one of the best pitchers in baseball when healthy, as evidenced by him finishing in the top 10 in National League Cy Young Award voting in each season between 2013 and 2016. He’s also been a critical piece of three Giants World Series titles, winning all four of his starts and picking up a five-inning save (!) in Game 7 of the 2014 Fall Classic, helping to earn him MVP honors. In those five World Series appearances, he has a 0.25 ERA.

Bumgarner, however, has struggled to stay healthy in the last two seasons. He’s made just 38 starts since the start of 2017 after leading the league with 34 starts in 2016 alone. Further complicating matters is the fact Bumgarner has just one year left on his contract. It’s relatively affordable at $12 million, but it might be hard to part with too many top-end prospects for a player who can leave after one season.

All told, Morosi reported the Giants are seeking at least one high-level prospect in a potential deal for the big lefty. 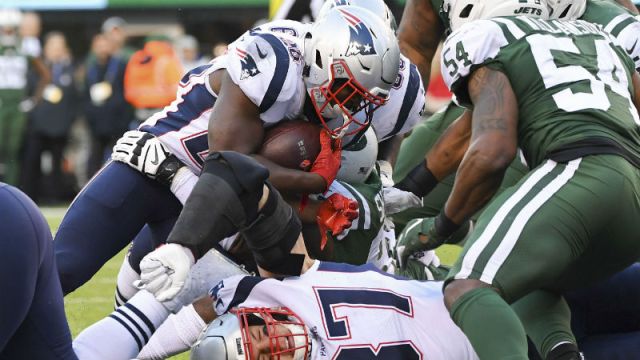 Why Patriots Felt Season-Best Rushing Performance Was Far From Perfect