Final, Patriots 27-13: It’s never easy in East Rutherford, but the New England Patriots prevailed 27-13 over the rival New York Jets on Sunday to improve to 8-3 on the season.

Patriots rookie Sony Michel rushed for a career-high 133 yards and a touchdown on 21 carries despite missing time in the third quarter with an apparent back injury, and James White added another 73 yards on 10 carries to round out an impressive rushing effort for New England.

Tom Brady completed 20 of 31 passes for 283 yards and two touchdowns, including his first to tight end Rob Gronkowski since Week 1. His other went to Julian Edelman, who led all receivers with four catches on five targets for 84 yards.

The Patriots’ defense held the Jets to just one touchdown overall and three points after halftime after being torched by the Tennessee Titans two weeks ago. Cornerback Stephon Gilmore, linebacker Kyle Van Noy and defensive end Trey Flowers all turned in strong performances, and Jason McCourty broke up a pass on fourth-and-goal late in the fourth quarter to seal the win.

Next up for the Patriots is a date with the Minnesota Vikings next Sunday at Gillette Stadium.

Fourth quarter, 5:15, Patriots 27-13: The Patriots matched the Jets’ three-and-out with one of their own. New York must score here to have any chance of making a late comeback.

Patrick Chung dropped Trenton Cannon for a 3-yard loss on second-and-3, and Stephon Gilmore stuck with Robby Anderson deep downfield to force an incompletion on third down.

A holding penalty on Obi Melifonwu on the ensuing punt — the Patriots’ 11th flag of the day — gave New England the ball on its own 14-yard line.

After a brief injury scare, the Patriots running back returned to the field with a vengeance, slicing through the line for 33 yards on his first play back before capping the drive with a 1-yard touchdown plunge.

Despite the injury and the fact he had multiple long runs called back before halftime, Michel is up to a career-high 130 rushing yards on 18 carries. He had a 1-yard touchdown run overturned before powering into the end zone one play later.

Josh Gordon helped set up the score with a 17-yard reception on third-and-10. Tom Brady also hit Julian Edelman for 16 yards, with a roughing the passer penalty on that play moving the ball to the Jets’ 3-yard line.

Fourth quarter, 13:23, Patriots 20-13: Deatrich Wise, who committed a costly roughing the passer penalty early in the game, redeemed himself by sacking Josh McCown on third-and-14.

On the ensuing punt, return man Julian Edelman threw a block near the goal line that prevented the Jets from grounding the ball deep in New England territory. A savvy play by the feisty veteran.

James White broke off a 27-yard run down the right sideline, and Tom Brady found Chris Hogan and Julian Edelman for gains of 27 and 21 yards, respectively, with Edelman’s resulting in a touchdown.

Sony Michel didn’t see the field during the drive, but he was standing on the sideline with his helmet on, suggesting he avoided any sort of significant injury.

Third quarter, 8:34, Patriots 13-10: The Patriots retook the lead on the first series of the second half, but they might have lost running back Sony Michel to yet another injury.

Seven plays after opening the drive with a powerful 31-yard rush, Michel had his body contorted on a run up the middle on third-and-1. He remained down on the field for several moments and continued to receive medical attention after reaching the sideline, apparently on his lower back.

Michel, of course, already has missed extensive time with knee injuries this season.

Perhaps wary of Tom Brady’s right thumb injury, the Patriots ran the ball on eight of the first nine plays of the second half. After Cordarrelle Patterson picked up a first down with a run up the middle on fourth-and-1, Brady misfired on three consecutive throws from the Jets’ 9-yard line, missing James White twice in the flat and Rob Gronkowski once on a wheel route.

Halftime, 10-10: Jason Myers’ 55-yard field goal in the final seconds of the first half cleared the crossbar with inches to spare. We’re all tied up after 30 minutes of football here at MetLife Stadium.

The decision to try the field goal at that juncture was another controversial call by Todd Bowles, as it was only second down and there still were eight seconds left on the clock. This one worked out, though, unlike the accepted penalty that led to Rob Gronkowski’s first-quarter touchdown.

Second quarter, 0:51, Patriots 10-7: The Jets’ latest drive lasted just two plays. The first was a 41-yard completion to Quincy Enunwa. The second was a heave to Robby Anderson that was intercepted by Stephon Gilmore.

Trey Flowers and John Simon provided heavy pressure on Josh McCown, causing his throw to sail and allowing Gilmore to camp out underneath it.

The Patriots went three-and-out on the ensuing series (three straight handoffs to Sony Michel), giving the ball back to the Jets at their own 42-yard line with 51 seconds remaining in the half.

Neither throw was catchable for Gronkowski, who had to play defense on the first to prevent a potential Jamal Adams interception. Tom Brady also misfired on a pass to Julian Edelman earlier in the drive, resulting in a big hit that left Edelman shaken up.

The wideout remained in the game but had his right arm looked at after returning to the sideline. Brady also received treatment on his right thumb after the drive.

Brady getting treatment on his right thumb after that series pic.twitter.com/wYkewp81Nm

Patriots trainers appear to be taking a look at Tom Brady's right hand. Took a shot on the sideline throw to Edelman early in that last drive that might've tweaked something.

Second quarter, 8:57, 7-7: Penalties have been a real issue today for the Patriots.

Flags wiped away two big plays during their latest drive, with a Trent Brown hold negating a 25-yard Sony Michel run and another Brown hold coupled with a David Andrews chop block eliminating a 13-yard James White run on third-and-3.

The Patriots eventually punted, but not before Tom Brady reached yet another historic milestone. A 4-yard completion to Michel moved him past Peyton Manning and into first place on the NFL’s all-time passing yards list (regular season and postseason).

Second quarter, 14:00, 7-7: The Patriots allowed a 17-yard completion to Quincy Enunwa but nothing more to force a Jets punt.

Of note: J.C. Jackson served as the Patriots’ No. 3 cornerback on the drive over Jonathan Jones, who allowed a touchdown on the previous possession.

On third-and-12 from the Jets’ 34-yard line, Tom Brady delivered a strike down the middle for Gronkowski, who hauled it in over Morris Claiborne for his first touchdown since Week 1.

The touchdown pass came after Jets coach Todd Bowles accepted an offensive pass interference penalty on James White. Had Bowles declined the call, New England would have faced a fourth-and-2 from the 24 and likely would have attempted a field goal.

It’s safe to say the decision will be scrutinized if the Jets do not win this game.

First quarter, 4:02, Jets 7-0: A series of costly miscues by the Patriots’ defense allowed the Jets to take the first lead of the afternoon.

After Josh McCown opened the drive with a 19-yard completion to tight end Chris Herndon, Isaiah Crowell evaded Elandon Roberts in the open field to pick up 19 yards on second-and-12.

The Jets gained just 3 yards on the next two plays, though, and Jason McCourty appeared to force a long field-goal attempt with a nice tackle on Jermaine Kearse on third-and-7. But Deatrich Wise was called for roughing the passer on the play, and Kearse beat Jones for a 16-yard touchdown three plays later.

First quarter, 8:07, 0-0: Jets safety Jamal Adams will see a lot of Rob Gronkowski today, and he prevailed in his first encounter with the big tight end.

Facing a third-and-10, Tom Brady tried to hit Gronkowski on an out route near the sticks. Brady’s throw arrived a second late, and Adams delivered a big hit on Gronkowski that jarred the ball loose, resulting in an incompletion and a Patriots punt.

Earlier in the drive, Julian Edelman toasted cornerback Morris Claiborne on a crossing route to pick up 36 yards.

Having Melifonwu opens up some new possibilities for New England’s defense, which deployed four safeties multiple times during the opening series. Their fourth safety for most of this season has been Nate Ebner, who rarely plays outside of special teams.

John Simon started on the edge for New England.

The Patriots allowed a 17-yard completion to Jermaine Kearse on third-and-7 before stiffening and forcing a punt.

First quarter, 15:00, 0-0: The Patriots won the opening coin toss and chose to defer. The Jets will start with the ball as we get underway on a beautiful afternoon in East Rutherford.

Also, Joel Embiid is in the house. The Philadelphia 76ers star is hanging with Patriots owner Robert Kraft on the Patriots’ sideline.

— Rob Gronkowski officially is active after missing the last two games and three of the last four. He was on the field earlier than usual for warmups and appeared to be moving well.

Sony Michel and Shaq Mason are active, as well.

— Rookie cornerback Duke Dawson will not make his Patriots debut after being activated off injured reserve this week. He’s a healthy scratch.

— Safety Obi Melifonwu is active for the first time since signing with the Patriots earlier this month. With Devin McCourty, Patrick Chung and Duron Harmon ahead of him on the depth chart, the 2017 second-round pick likely will be used primarily on special teams to start.

— Nate Ebner is inactive for the first time this season. He plays a key role on multiple special teams units, including serving as the personal protector on the Patriots’ punt team.

8 a.m. ET: Following their Week 11 bye, the New England Patriots will get back to work this afternoon as they travel to MetLife Stadium for a date with one of their oldest rivals, the New York Jets.

The Jets have just three wins in 10 games this season, but they have a history of playing the Patriots tough at home. Each of the last five meetings at MetLife between the two AFC East foes was decided by seven points or fewer, with New York winning two of those contests.

The 7-3 Patriots, meanwhile, are looking to rebound from the blowout loss they suffered at the hands of the Tennessee Titans two weeks ago. Tight end Rob Gronkowski is expected to play after missing the last two games and three of the last four with ankle and back injuries, and quarterback Tom Brady (knee/illness) is expected to suit up, as well, after a rare Friday practice absence.

Brady, Gronkowski, running back Sony Michel, right guard Shaq Mason and special teamer Nate Ebner all are listed as questionable. Michel returned to action against the Titans after missing time with a knee injury. Mason said earlier this week he’s ready to play if called upon, so it’s likely he’ll be back in the lineup today after sitting out two games with a calf ailment.

Tight end Dwayne Allen has been ruled out with a knee injury.

The Jets will be without rookie quarterback Sam Darnold, who will miss his second straight game with a foot injury. 39-year-old Josh McCown will start in his place.

Kickoff is set for 1 p.m. ET in East Rutherford, N.J. Check back here throughout the day for full pregame coverage. 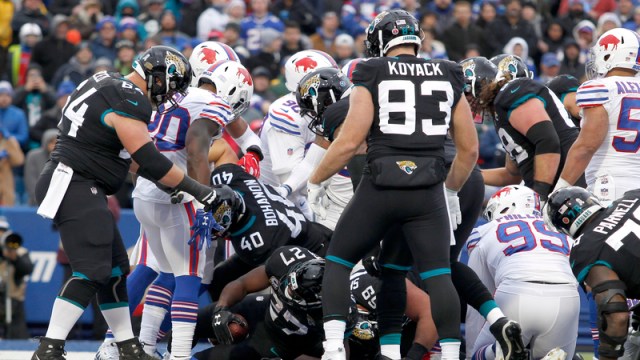 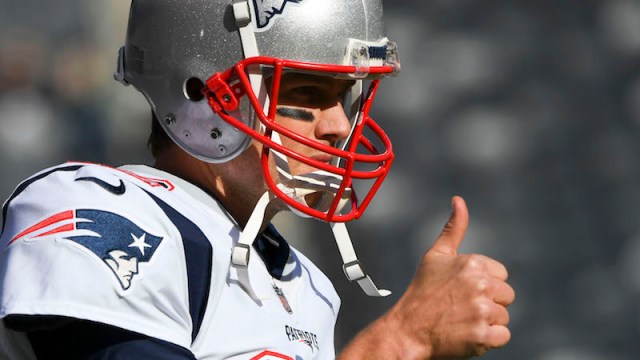 Who Helped Patriots Most In Bounce-Back 27-13 Week 12 Win Over Jets?