Patriots Vs. Titans Live: New England Dominated In All Facets In 34-10 Loss - NESN.com Skip to content

The Titans dominated the Patriots on both sides of the ball. Wide receiver Corey Davis caught six passes on nine targets for 118 yards and a touchdown — with most of those coming against Patriots top cornerback Stephon Gilmore — and Tennessee’s defense battered Tom Brady, sacking him three times.

Brady completed just 21 of 41 passes for 254 yards and no touchdowns with no interceptions before being lifted for backup Brian Hoyer with more than seven minutes remaining in the fourth quarter.

The Patriots also were unable to run the ball, with rookie Sony Michel managing just 31 yards on 10 carries in his return from a knee injury.

Before exiting with an ankle injury midway through the fourth, Edelman was the Patriots’ most effective offensive player, leading the team with nine catches on 12 targets for 104 yards.

Fullback James Develin scored New England’s lone touchdown on a 1-yard rush early in the second. It was Develin’s first carry since 2014.

After the Patriots failed to pick up a first down on a reverse pass to Tom Brady on the previous drive, the Titans called 1) a reverse pass to their own QB, Marcus Mariota, that gained 21 yards, 2) a classic option and 3) a direct snap to Derrick Henry out of a Wildcat formation that resulted in a 10-yard touchdown run.

This one’s over, folks. The Patriots evidently know that, too, as Brian Hoyer has replaced Tom Brady under center.

Julian Edelman also left the game with an ankle injury. He’s questionable to return, though that’s unlikely given the score.

Julian Edelman took the ball on a reverse from James White and lofted a pass to Tom Brady, who caught it. As the QB turned upfield, though, he stumbled, allowing Wesley Woodyard to stop him 1 yard short of a first down.

Marcus Cannon jumped offsides on the ensuing play, turning a fourth-and-1 into fourth-and-6, and Logan Ryan broke up a pass to Julian Edelman to give Tennessee possession.

Fourth quarter, 13:32, Titans 27-10: The first sack of Stephon Gilmore’s seven-year NFL career forced the Titans to punt the ball away on their latest possession.

The sack came on a rare corner blitz by Gilmore, whom the Patriots almost never take out of coverage for obvious reasons. He’s struggled mightily against Corey Davis today, though, so why not mix things up?

Third quarter, 2:00, Titans 27-10: The Patriots likely will be down to one tight end for the rest of the game.

After briefly returning to the field, Dwayne Allen limped off and subsequently was taken to the locker room, leaving Jacob Hollister — a move tight end with limited blocking ability — as New England’s only available body at the position.

Dwayne Allen and Trent Brown collided in the backfield behind Brady, leaving both players shaken up. Allen limped off the field and into the sideline medical tent, while Brown played out the rest of the drive before heading toward the locker room.

Brown is questionable to return with a back injury, the Patriots announced.

Marcus Cannon also left the field during the drive, leaving the Patriots with just one healthy tackle: LaAdrian Waddle.

The Patriots were forced to punt after Kevin Byard broke up a pass intended for Jacob Hollister on third down.

Third quarter, 11:49, Titans 24-10: Nothing doing for the Titans, who matched the Patriots’ three-and-out with one of their own.

Tajae Sharpe had a step on Jason McCourty on third down, but Marcus Mariota couldn’t connect with him.

The Patriots caught a break on Brett Kern’s punt, which hit Jonathan Jones in the back but rolled directly out of bounds.

Trent Brown is back in the game, and Marcus Cannon appears to have avoided injury, but New England’s offensive line is having all sorts of problems keeping rushers away from Tom Brady. Brown allowed Tennessee’s latest sack.

Halftime, Titans 24-10: A sack of Tom Brady put an end to a brutal first half for the Patriots.

New England bypassed what would have been a 61-yard field-goal attempt to try for a Hail Mary instead, and cornerback Logan Ryan sliced into the backfield to bury his former teammate.

Second quarter, 1:09, Titans 24-10: Two big third-down conversions set the Titans up for their third touchdown of the first half.

Making matters worse for the Patriots, left tackle Trent Brown is questionable to return with an illness.

The connection between Brady and Gordon hasn’t been particularly strong, though. They had the 44-yard hookup early in the game, but Gordon’s other seven targets have yielded just two catches for 14 yards.

Jackson, who’s rotated with starter Jason McCourty in several games this season, evaded a Corey Davis block to wrap up Darius Jennings for no gain on a screen pass.

A quality punt by Brett Kern pinned the Patriots at their own 9-yard line.

The drive featured another big gain by Julian Edelman, who evaded Logan Ryan to pick up 30 yards off a play fake by Tom Brady.

The Patriots fullback, who hadn’t carried the ball since 2014, got the nod at the 1-yard line and plunged his way over the line for New England’s first touchdown of the afternoon. It was just the ninth carry of the 2017 Pro Bowler’s career, including playoffs.

Rookie Sony Michel handled the bulk of the ball-carrying on the drive, gaining 15 yards on four rushing attempts.

The Patriots also opted to have Tom Brady try to QB sneak his way to a first down on third-and-2. He was stopped for no gain but found James White in the flat on the next snap for a successful fourth-down conversion.

Even with Michel now healthy, New England has continued to use Cordarrelle Patterson in the backfield. Early in this latest drive, they ran play-action with the converted wide receiver for the first time this season, resulting in a 29-yard completion to a wide-open Julian Edelman.

The Patriots followed up the touchdown by forcing the Titans to punt for the first time today, with Patrick Chung stopping Dion Lewis short of the sticks on third-and-5.

First quarter, 2:35, Titans 17-3: The Patriots kept the Titans out of the end zone this time around, but Tennessee still tacked on a field goal to extend its lead to 14 points.

The big play of the drive was a 29-yard catch-and-run by tight end Jonnu Smith made possible by a Patrick Chung missed tackle. Marcus Mariota failed to connect with Corey Davis in the end zone on third down, forcing Mike Vrabel to send the field-goal unit out.

First quarter, 4:11, Titans 14-3: The Patriots’ offense has really struggled thus far. Though they picked up 44 yards on Tom Brady’s bomb to Josh Gordon, their other eight plays have gained a total of negative-12 yards.

New England went three-and-out on its second possession, which ended when linebacker Wesley Woodyard sacked Brady for an 11-yard loss on third down.

First quarter, 5:58, Titans 14-3: After dominating in recent weeks, Stephon Gilmore is getting worked by Corey Davis in his first quarter.

On the Titans’ second drive, Gilmore was called for pass interference on Davis, allowed a 16-yard reception to the second-year receiver and was beaten for a 23-yard touchdown that put the Titans ahead 14-3.

Davis fought through another pass interference penalty on Gilmore to haul in his touchdown catch.

Dion Lewis, who surely is motivated to stick it to his old team, also has been running well thus far, though he was dropped for a 5-yard loss by Dont’a Hightower on the play before Davis’ score.

Brady and Gordon hooked on for a 44-yard bomb on third-and-13, but Gordon also had another pass slip through his hands on third-and-10, forcing the Patriots to settle for a 52-yard Stephen Gostkowski field goal.

For those curious about how the Patriots would use Cordarrelle Patterson now that Sony Michel is back, they began the game in a pony set with Patterson and James White in the backfield. Brady tried to hit White on a screen, but the running back was dropped in the backfield for a 3-yard loss.

In fact, the long gain to Gordon was the only positive play of the Patriots’ first drive. They failed to gain positive yardage on any of the others.

Safety Patrick Chung couldn’t keep up with Smith on the play.

In the interim, Dion Lewis carried four times for 12 yards, including a 3-yard pickup on third-and-1.

Davis beat Patriots No. 1 cornerback Stephon Gilmore for his big gain. He also was targeted in the end zone against Jason McCourty but couldn’t haul in a high throw from Mariota.

First quarter, 14:49, 0-0: What a start for the Titans. Darius Jennings returned the opening kickoff 58 yards to the Patriots’ 40-yard line.

This will be a de facto home crowd for the Patriots. New England fans might outnumber Tennessee supporters here at Nissan Stadium today.

11:49 a.m.: One milestone to watch for today: Tom Brady needs just 4 rushing yards to reach 1,000 for his career — a quest he’s been hyping up on social media since the spring.

NFL Films produced a short feature on #TB1K that premiered this morning.

Tom Brady is only 4 YARDS AWAY from 1K rushing yards. Will this be the week the goat reaches the peak? ???#NFLFilmsPresents: Brady's Quest for 1,000@Patriots pic.twitter.com/DHJRyE3TZP

11:31 a.m.: Rob Gronkowski officially will not play today. He headlines the Patriots’ inactives.

The full list is below. No surprises based on what we saw here in warmups.

Sony Michel, Jacob Hollister, Matthew Slater and Trent Brown all are active. This will be Michel’s first game since Week 7 and Hollister’s first since Week 6.

Newly signed safety Obi Melifonwu is inactive, but linebacker Albert McClellan will make his Patriots debut today. Expect him to take over Geneo Grissom’s role on special teams and provide some depth on defense behind Dont’a Hightower, Kyle Van Noy and Elandon Roberts.

Barner sitting out suggests we’ll see Sony Michel return to the lineup for the first time since Week 7.

Keion Crossen and Kenjon Barner are warming up with Danny Etling and Ja?Whaun Bentley. Suggests they?ll be inactive today, which also means we should see Sony Michel return to the lineup. pic.twitter.com/H73OIEVyiC

It’s interesting cornerback Duke Dawson was not part of this group considering he made the trip to Buffalo two weeks ago. Dawson must be activated off injured reserve by Wednesday in order for him to play again this season.

The full inactive lists will be announced at 11:30 a.m.

9 a.m.: Another player has been added to the Patriots’ injury report: special teams captain Matthew Slater. He’s listed as questionable with an illness.

8 a.m. ET: Good morning from Nashville, where the New England Patriots are preparing to take on Mike Vrabel, Malcolm Butler, Dion Lewis and the rest of the Tennessee Titans.

The Patriots have reeled off six consecutive wins to run their record to 7-2 entering this matchup, while the 4-4 Titans snapped a three-game losing streak last week by knocking off the Dallas Cowboys on “Monday Night Football.”

New England, which has its bye week next week, likely will not have Rob Gronkowski at their disposal today, as the All-Pro tight end reportedly is not expected to play as he continues to recover from ankle and back injuries that have sidelined him for two of the Patriots’ last three games.

Rookie running back Sony Michel, on the other hand, is expected to play after missing two games with a knee injury, according to a report Saturday night by ESPN’s Adam Schefter.

Kickoff at Nissan Stadium is set for 1 p.m. ET. Be sure to check back here throughout the morning for full pregame coverage.

Patriots vs. Titans preview: What to watch for >>

Scouting the Titans: 5 things to know >> 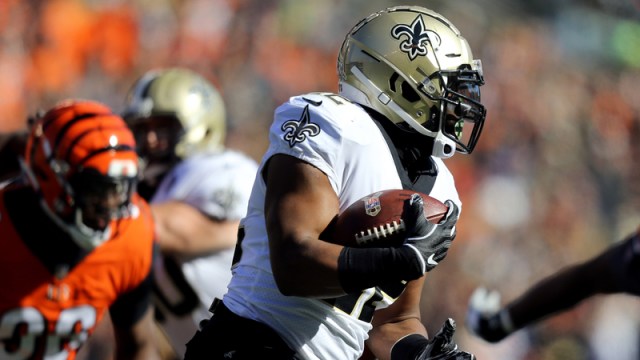 What Went Wrong In Patriots’ 34-10 Lifeless Loss To Titans Before Bye?