Patriots Film Review: Vintage Gronk Made His Comeback In Loss To Dolphins - NESN.com Skip to content

“He?s one of those guys,” the Miami Dolphins coach said, “when all of the sudden, you think he?s being quiet, and then the next thing you know, he has two or three touchdowns and 100-plus yards and just absolutely cuts your heart out on the defensive side.?

Before his ill-fated attempt to keep Kenyan Drake out of the end zone on Miami’s miraculous last-second touchdown, Gronkowski was a dominant offensive force in New England’s 34-33 loss at Hard Rock Stadium. It was a welcome return to form for the four-time All-Pro, who’s endured a frustrating season marked by injuries and inconsistency.

After managing just three catches on four targets for 26 yards in last week’s win over the Minnesota Vikings (while also struggling as a run blocker and committing three penalties), Gronkowski caught all eight balls thrown his way against Miami, finishing with 107 yards and a touchdown in his first 100-yard performance since Week 1.

“I’m so proud of him,” quarterback Tom Brady said Monday on WEEI’s “Mut & Callahan.” “He caught the ball last week against Minnesota and took a pretty good hit and worked through that and had a great game.” … including his touchdown, which came late in the second quarter. Brady placed the ball between three converging Dolphins defenders, and Gronk won a jump ball against cornerback Bobby McCain at the goal line. On Gronkowski’s other two receptions, he was matched up one-on-one against a linebacker. He beat Jerome Baker for 17 yards over the middle, then later evaded Kiko Alonso on an out route to pick up 15 yards on third-and-7 and set up the aforementioned touchdown grab.

Both plays ended with a hit to the knees from Dolphins safety T.J. McDonald, who also nailed Gronkowski in the small of his back after another catch. Given Gronk’s injury history, hits like these make Patriots fans cringe. The big man appeared no worse for wear, however, playing all but four offensive snaps in the game.

Gronkowski also stood out in the running game and in pass protection. He laid out Baker on the second play of the game and later delivered the key block on New England’s longest run of the afternoon — an 11-yarder by James White. This won’t be remembered as an iconic Gronkowski performance, but a glance at his old game logs revealed just how rare Sunday’s stat line was for surefire Hall of Famer. He’d been targeted eight-plus times in a game without an incompletion just once before in his career: a nine-catch, 147-yard, three-touchdown effort in a 2014 rout of the Chicago Bears.

Some other observations from this week’s film review:

— For the second consecutive week, the Patriots’ defense had a ton of trouble stopping the run, surrendering season highs in rushing yards (189) and yards per carry (9.0) to a Dolphins team that ranked near the bottom of the NFL in rushing offense.

Ninety of those yards came on two carries: a 36-yarder by Frank Gore and a 54-yard touchdown by former Patriot Brandon Bolden. Bolden, who hadn’t carried the ball with any regularity since 2015, wasn’t touched on his way to the end zone The Patriots have allowed more than 7 yards per carry in each of their last two games. … but that wound up being the highlight of an otherwise disappointing showing by the Patriots’ running backs. Michel hasn’t gained much traction over the last two weeks (37 carries for 120 yards against the Vikings and Dolphins), nor has Rex Burkhead (11 carries, 22 yards) or White (10 carries, 39 yards).

— Left tackle Trent Brown had a particularly rough game as a run blocker.

— Brady surely wants this pass to Chris Hogan back: A completion there would have given the Patriots a two-touchdown lead heading into halftime. Instead, they came away with nothing after Brady took an ill-advised sack on the ensuing snap and time expired in the first half.

— Brady’s 37-yard touchdown pass to Cordarrelle Patterson, on the other hand, was a thing of beauty.

Patterson lined up off Gronkowski’s hip and blew past cornerback Walt Aikens on a vertical route, and Brady delivered a bullet that found a home in the receiver’s outstretched hands.

The Patriots clearly liked the matchup of Patterson one-on-one against Aikens, a career special teamer who’d played just 10 defensive snaps all season entering Sunday. Star corner Xavien Howard was inactive with a knee injury, forcing the Dolphins to mine the lower reaches of their depth chart.

Patterson made a nice grab, too. — The Patriots exploited another mismatch on Julian Edelman’s second-quarter score.

Edelman was matched up against rookie cornerback Cornell Armstrong (22 career defensive snaps before Sunday) and beat him with a whip/return route — the same one he used to score the game-winning touchdown in Super Bowl XLIX.

Completions to Edelman accounted for five of New England’s nine third-down conversions. He finished with a team-high nine catches on 12 targets for 86 yards and a touchdown.

— Josh Gordon was excellent again. His five receptions (on eight targets) went for 29, 21, 18, 16 and 12 yards. He also drew a pass interference call in the final minutes that gave the Patriots the ball at Miami’s 7-yard line.

— The Dolphins averaged 19.8 yards per play on their five touchdown drives, all of which took 3:04 or less to complete. Twelve of the 18 plays Miami ran during those possessions gained 10 or more yards, including 23-, 54- and 69-yard touchdowns.

— New England, which struggled to stop Miami during the first half, broke out its amoeba defense late in the second quarter. The look, which gave the Vikings fits last week, produced a third-down sack split between cornerback Jonathan Jones and linebacker Kyle Van Noy. Four of the Patriots’ five sacks in the game came on third down.

— The Patriots dropped defensive tackle Lawrence Guy into coverage for the first time on a creative zone blitz that yielded a Dont’a Hightower QB hit and an incompletion.

— New England added a new wrinkle to its punt team by using Patterson as a gunner — a role he filled earlier in his career with the Vikings and Oakland Raiders.

Patterson forced a fumble on Ryan Allen’s second punt of the afternoon that Albert McClellan — who blocked two Dolphins punts in the game — nearly recovered.

Speaking of McClellan, his two blocks prompted Miami’s Matt Haack to alter his punting form on his next attempt. He did that one rugby-style out of a college-esque formation. 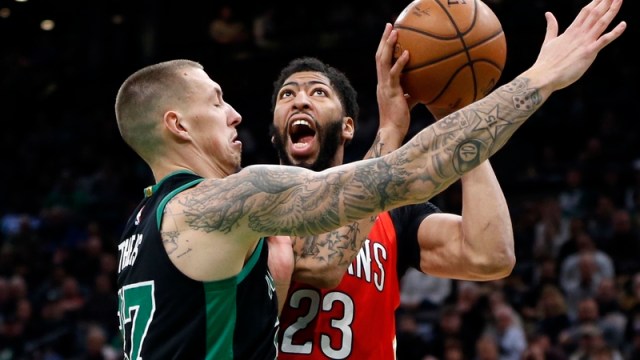 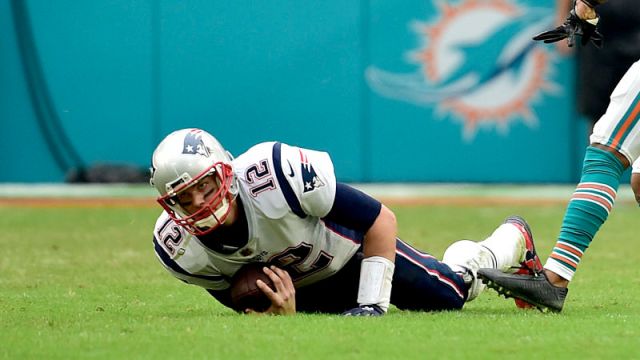